Sly and the Family Stone

‘Summer of Soul (…Or, When the Revolution Could Not Be Televised)’ Review: Questlove’s Revelatory 1969 Harlem-Concert Documentary 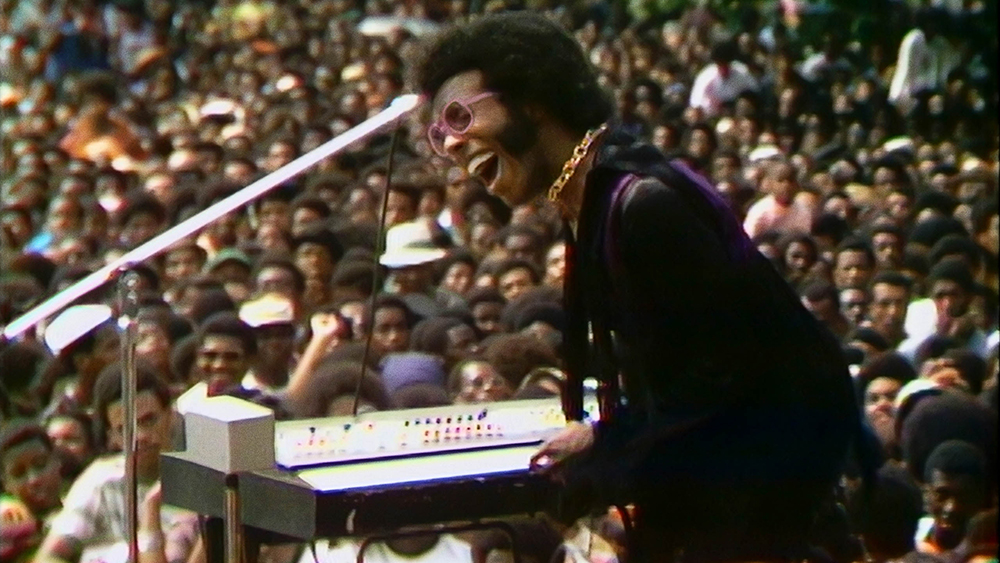 In “Summer of Soul (…Or, When the Revolution Could Not Be Televised),” which opened the Sundance Film Festival tonight on a note of heady historical exuberance, we see images from the 1969 Harlem Cultural Festival, and they’re like dream visions of a promised land. An ocean of Black faces, stretching back like something out of “Monterey Pop” or “Woodstock.” Performances by blues, gospel, and rock ‘n’ soul artists who just about sear you with their tossed-off fervor. A mood larger than the event — something soft but crackling in the air.

A great many things happened in 1969 that marked the year as a turning point: Altamont, Chappaquiddick, the moon landing, the Manson murders, Woodstock. But one momentous thing happened that very few people know about (and that the larger culture has totally forgotten), and that was the astonishing series of concerts that took place over six weekends in Mount Morris Park in Harlem.

The Harlem Cultural Festival was attended by hundreds of thousands of ecstatic spectators. Yet where Woodstock and Altamont became legendary, immortalized by the films that were made of them, the Harlem Cultural Festival became, almost overnight, an abandoned piece of buried treasure. The concerts were filmed, and quite spectacularly (watching them, you feel like you’re sharing the stage with Stevie Wonder, Mahalia Jackson, B.B. King, Nina Simone, and others). Yet no producer was willing to make a film of them. As the opening title of “Summer of Soul” informs us, the footage “sat in a basement for 50 years. It has never been seen.”

The artist who has now, for the first time, shined a precious light on that footage — on this tumultuous and essential piece of history — is Ahmir “Questlove” Thompson, who makes his feature-film directorial debut with “Summer of Soul.” It’s a music documentary like no other, because while it’s a joyful, cataclysmic, and soulfully seductive concert movie, what it’s really about is a key turning point in Black life in America.

In the aftermath of the Civil Rights movement — the triumphs and the backlash, the revolution and the riots, the rise and fall of Martin Luther King Jr. and Malcolm X — the summer of 1969, as one of the film’s observers puts it, gave rise to “the wholesale re-evaluation of our history and our culture.” He’s talking about the epiphanies of Afrocentrism, Black Is Beautiful, and Black Power. The game-changing eruptions of funk-and-soul amazement. And, coursing through it all, the birth of a new kind of liberation, one that tapped impulses that were political and artistic, spiritual and economic, as sonic as a Sly Stone jam or as visual as a 10-inch-high Afro. As the critic Greg Tate says in the film, “At the Harlem Cultural Festival, you got an audience who is showing up that is radicalized. There’s just this embrace of neo-super-Blackness.”

Watching “Summer of Soul,” what you experience is nothing less than the sound of freedom. The film is about how that feeling was encoded in the music, and how it spread to the audience, and also from the audience. “Summer of Soul” shows us that what unfolded on an outdoor stage in Harlem in 1969 could become a deliverance: the fulfillment of something that had been building for decades.

Questlove has always been a virtuoso mixmaster, and in “Summer of Soul” he creates what is, in effect, the historically savvy remix of a concert film. Taken out of the vault, the footage now possesses a special glow of revelation, one that comes, I think, from the way that the musical artists cast a knowingly different spell in front of an all-Black audience than they would have in front of a more mixed one. Freedom — the new freedom — is the theme of the concerts, and it links the musicians until their grooves, diverse as they can be, feed into one another, as if they were passing a baton of blues-based ebullience.

The artist who kicks off the movie is Steve Wonder, and it’s Stevie, perhaps, as you’ve never seen him: leaving his hits behind, literally walking around the stage, then sitting down at the drums to push a jam in every direction it will go. B.B. King does a number about the blues that chases the blues away, with guitar licks so sharp they seem to be taking bites out of the air. And just when it feels like the show is settling into a vibe you wouldn’t hesitate to call rootsy, the 5th Dimension come on, in their color-coordinated suits, with vests (as one former attendee describes it) the color of a Creamsicle.

They’re no one’s idea of a roots band — and Marilyn McCoo and Billy Davis Jr., interviewed today, talk about how much guff they had to take for “not being Black enough.” But then we see the group go into their mashup single of “Aquarius/Let the Sunshine In,” which was the second biggest hit of 1969 (and that’s saying something). The first half is moody airy bliss; the second half (“Le-e-et the sunshine…”) is wrenching — a freight train careering off the tracks and lurching up to heaven. It’s one of several performances in “Summer of Soul” that want to take you higher, and do.

Questlove interviews people who attended the festival, showing them the old footage so that we see their reactions to it (awe, wonder, tears), and he talks to a number of the surviving musicians. But his boldest directorial stroke is to frame and edit nearly every musical number as an inquiry into the Black pop experience. He tells us something essential about each of the acts, weaving the mini-documentary anecdotes into the numbers they’re performing on stage — and if he did it any less well, it wouldn’t work.

But Questlove reveres this music so much that he takes care never to lose the pulse of it. So when the Edwin Hawkins Singers do “Oh Happy Day,” the women choir members swaying in their lime-green floor-length dresses, the tale of how this devotional ensemble came together out of the Bay Area feeds into the passion we’re hearing. And when Clara Walker and the Gospel Redeemers do the delirious “Wrapped, Tied, and Tangled,” it completes the song to hear the enticing eloquence of Al Sharpton, who says, “Gospel was more than religious. Gospel was the therapy for the stress and pressure of being Black in America. We didn’t go lay on the couch. We didn’t know anything about therapists. But we knew Mahalia Jackson.”

And then the movie shows us Mahalia Jackson. And she melts you. She does some scat gospel that’s extraordinary, and then she teams up with Mavis Staples to perform Martin Luther King Jr.’s favorite song, “Take My Hand, Precious Lord.” They sing it, they scream it, they caress it, they slow it down to the point that the light of God glints through it.

There are moments, and they’re glorious, when “Summer of Soul” just about takes you to church. But saying that makes the movie sound more pious than it is. Gladys Knight and the Pips do “Heard it Through the Grapevine,” and you could watch the Pips move forever; they seem to be dancing on a cloud. It’s startling to see what a golden oldie “My Girl” sounds like when David Ruffin, who had only recently left the Temptations, shows up to perform it solo (the song was released just four-and-a-half years before, but it was already on the other side of a cultural divide). And then Sly and the Family Stone come on, and you see the crowd literally surge forward like a wave. The movie surges too. For this is the sound of the future: loose and multicultural and forceful and bright, a sound of exultant power.

The most power emanates from Nina Simone. For years, there has been a clip of her on YouTube from the Harlem Cultural Festival singing “Ain’t Got No, I Got Life,” and I’ve probably watched it 100 times. Never was she more charismatic (“She looked like an African princess,” says one attendee), her hair in a cone, with giant metallic silver earnings, her stare torn between defiance and joy. She does “Backlash Blues” and premieres “To Be Young, Gifted and Black,” as Charlayne Hunter-Gault tells the moving story of how, when she became one of the first two Black students at the University of Georgia in 1961, the white girls in the dorm would terrorize her, pounding on her floor; she got through it by listening to Nina Simone. Then, onstage, Simone reads the poem “Are You Ready?” It has incendiary lines (like “Are you ready to kill?”), but what she’s really asking, as she did in every song she sang, is, Are you ready to be free? “Summer of Soul” stirringly captures the moment when a sea of people in Harlem heard a grand series of voices and said, Yes.