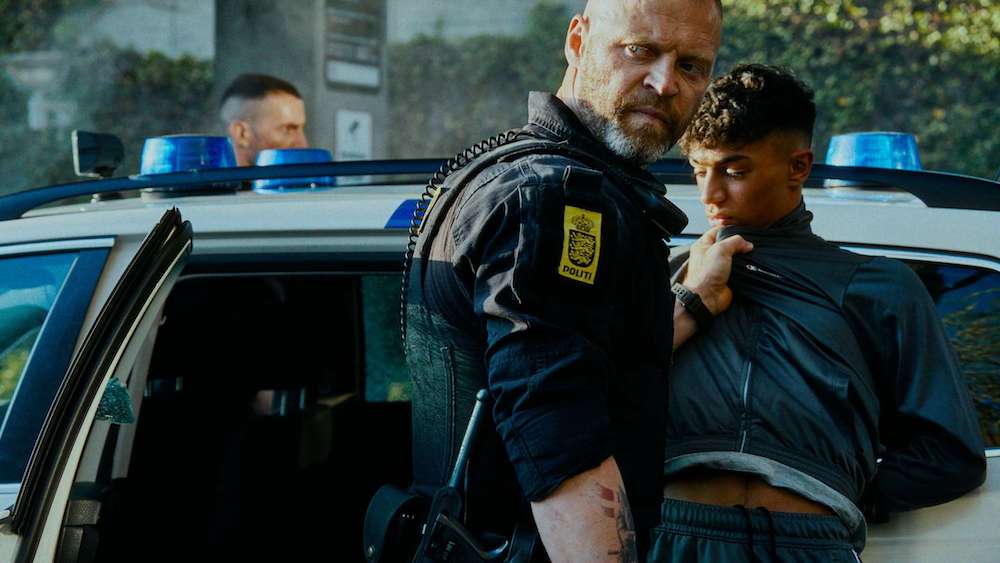 Slick, unsettling Danish law-enforcement thriller “Shorta” — or as it’s been generically retitled in the United States, “Enforcement” — opens with a familiar “I can’t breathe” moment as a team of police scramble to restrain a 19-year-old Muslim man, suggesting that what happened to Eric Garner in Staten Island, and to George Floyd in Minneapolis, is hardly an America-specific problem. Like those men, Talib Ben Hassi dies from complications of the police chokehold, and as in those cases, the community rises up against the establishment that was sworn to protect it.

In other words, “Shorta” begins where films such as “Do the Right Thing” and “Les Misérables” abruptly stopped. That’s an awfully ambitious (if somewhat foolhardy) setup for helmers Anders Ølholm and Frederik Louis Hviid to construct their debut feature — a thriller that’s both a relentless adrenaline rush and a social-issue Rorschach test for all who watch it. Whereas Spike Lee and Ladj Ly dedicated their movies to representing how different parties’ conflicting experience can boil over, “Shorta” deals with the immediate aftermath from the point of view of two police officers who find themselves in Copenhagen’s Svalegården ghetto when the rioting erupts.

Worth noting, as the movie does at the outset: “Shorta” is not a Danish word but an Arabic one, meaning “police.” The film asks audiences to identify with white cops Mike Andersen (Jacob Lohmann) and Jens Høyer (Simon Sears), but referring to them by the same derogatory phrase spray-painted across their patrol car underscores one of its key themes — namely, the question of how people from different communities see and describe one another. The answer: seldom with respect, often with suspicion, no matter which “side” they’re on.

Both Mike and Jens were witnesses to the Talib Ben Hassi incident, and the movie allows (even encourages) audiences to jump to their own conclusions about their respective characters. Macho, quick-to-anger Mike has a mean temper and an overtly racist personality. Early on, Jens is pulled aside by his commander and told to keep an eye on his partner — which puts us in the uncomfortable position of policing the police every time Mike opens his mouth or reaches for his gun. But just because Jens knows when to exercise restraint doesn’t mean he’s not harboring many of the same prejudices.

What at first appears to be a standard good cop/bad cop dynamic is in fact the portrait of two antiheroes, whose instincts and inherent biases are constantly being tested as the power balance shifts over the day and night ahead. The pair enter Svalegården shortly before the unrest turns to full-on rioting, and as they approach, the widescreen frame rotates 180 degrees, a stylish yet effective way of foreshadowing how things are about to be upended. Each time Mike stops someone, we witness — through Jens’ clenched-jaw discomfort — how this badge-wearing bully uses his authority to intimidate and humiliate the locals.

Today of all days would be a wise one to go easy, but instead, Mike provokes a random teenager, Amos Al-Shami (Tarek Zayat), forcing the kid to drop his pants for an unnecessary search. When Amos tosses a milkshake at their windshield in anger, Mike chases the boy around the housing complex and arrests him. Whether coming to Amos’ defense or seeking vengeance for Talib, the neighborhood chooses that moment to declare war on the two cops, fighting for their survival in what they see as enemy territory.

Put aside the politics, and “Shorta” suggests a cross between “Assault on Precinct 13” and “Training Day” — a well-oiled genre machine whose loaded tagline could be “When the looting starts, the shooting starts.” But co-directors Ølholm and Hviid don’t want us to turn our brains off. Amid they excitement, they create morally ambiguous situations by which to challenge their characters — and the audience. While Jens and Mike are understandably nervous, Amos seems to be in a far worse position: With his wrists tied in plastic cuffs, dragged around by two jittery cops, he’s essentially a human shield, which tips our sympathies once again.

The underlying situation here is so loaded, audiences are sure to have wildly different reactions, though it’s important to note that the filmmakers are clearly quite conscious of the prejudices at play, deliberately introducing and then inverting stereotypes along the way. For example, at one point, bullets whiz down on Mike from an upper apartment. The confusion gives us a few seconds to imagine who’s responsible, before the unseen sniper screams something about “looters” from his balcony.

Cutaways to police helicopters reinforce the idea of surveillance, a system that works both ways: “Shorta” also shows the residents pulling out camera phones and documenting the cops’ behavior, which Mike sees as an obstacle but audiences will surely recognize as a sign of distrust by a community that demands accountability. (Hence the giant chalk eyes a Svalegården girl draws on the pavement, staring back up at those invasive choppers.) Among the movie’s many ironies, it is Amos’ mother (Özlem Saglanmak) who comes to Mike’s aid when he is injured. “If you’re always treated like something you’re not, you end up believing it,” she says, referring to her son, though the principle applies to cops as well.

Judging by the film’s tense staging and propulsive energy, Ølholm and Hviid could easily go straight from “Shorta” to a larger-scale Hollywood blockbuster if they were so inclined. The duo display an aptitude for immersive, unpredictable action, but can be cavalier about the violence. They should have resisted the testosterone thrill of having Mike haul a machine gun out of the trunk and unleash it. The advancing crowd aren’t expendable zombies, after all, but justifiably furious citizens. We can see that, and from a dramatic perspective, these two officers come to recognize it as well — although by that point, the social contract has been damaged beyond repair, making it hard to accept the movie’s upsetting third-act idea of redemption. Poetic justice and actual justice, it seems, are two entirely different things.