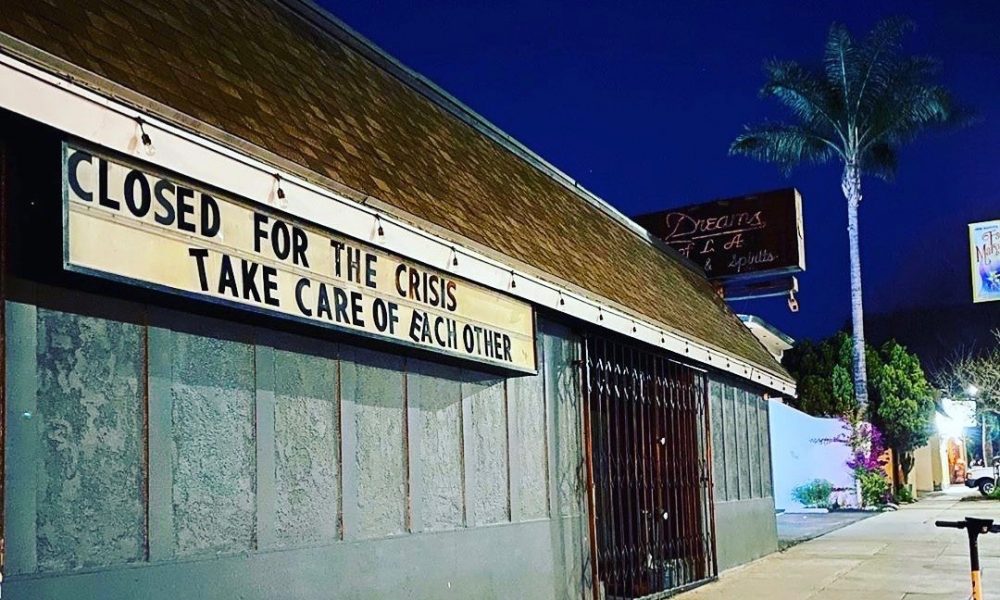 According to figures released Monday, the Small Business Adminstration has awarded $7.5 billion of the $16 billion in #SaveOurStages federal relief to independent venues that was signed into law late in December, of which $6.3 billion has been paid out.

While the SBA has done a solid job of moving things forward after six months of disastrous bureaucratic delays — which saw just 100 venues receiving funds as of June 10, resulting in the permanent closure of many other cash-strapped establishments — there is still a long way to go, and many venues say they still have not received a response from the SBA.

Known as Small Venue Operators Grants (SVOG), the program has moved relatively quickly since it was placed under new supervision in June. Looking at the numbers released on Monday, of the 15,429 applications submitted by venues to the SBA, 9,844 have received “notice of award” — which does not mean they have actually received funds — with 2,718 declined. Some 2,027 businesses — 14% of the total, all of which applied for aid within the first 60 days — have not received notice about their applications.

SBA Administrator Isabel Casillas Guzman said, “After making improvements to the Shuttered Venue Operators Grant program, the SBA is now delivering money quickly, efficiently and fairly to highly-impacted small businesses and venue operators that are critical to America’s cultural fabric and local economies. When I began my tenure at the SBA, this first-of-its-kind SVOG program was not where I wanted it to be. I’m proud that, thanks to the hard work and dedication of our talented team, we have turned the ship around. America’s small businesses can rest assured that the SBA will continue to work around the clock to provide the relief that is needed to revitalize local economies and build back better from the pandemic and economic crisis.”

Senate Majority Leader Chuck Schumer, a key champion of #SaveOurStages with Senators Amy Klobuchar, John Cornyn and Ben Cardin, said: “I am proud to have joined Senators Cardin, Klobuchar, and others to pass the Shuttered Venue Operator Grants into law in December and add even further funding for the program in the American Rescue Plan, and am so happy that the live entertainment and other cultural arts venues in New York and across the country are receiving this desperately needed financial aid. Over the last year, I have visited music halls, theaters and other cultural institutions throughout New York that had been forced to shutter their doors because of the COVID-19 pandemic. From comedy clubs to concert halls, these cultural institutions are the true heart and soul of New York, and I cannot wait to watch, listen and laugh as they bounce back bigger and better than ever, and I’ll keep working with the SBA to get all of the program’s assistance out the door as soon as possible to help all eligible venues recover.”

“I am grateful that live venues and cultural institutions in Maryland and nationwide are beginning to receive the aid they need to survive the COVID-19 pandemic and recover from the worst economic crisis in nearly 100 years,” Senator Ben Cardin, Chairman of the U.S. Senate Committee on Small Business and Entrepreneurship said. “I have already heard from many venue operators in Maryland who intend to use their SVOG funds to catch up on bills, quickly rehire staff, and prepare for reopening. Last year life changed for all of us, practically overnight, so I am looking forward to the return of winding box office lines and lit-up marquees in the months ahead as our communities continue to recover from COVID-19.”

The SVOG portal remains open and funding is still available for all eligible applicants. SBA’s Office of Disaster Assistance Customer Service Center is available from 8 a.m. to 8 p.m. ET to provide technical assistance with the SVOG application portal and can be reached at 1-800-659-2955 or, for the deaf and hard-of-hearing, 1-800-877-8339. 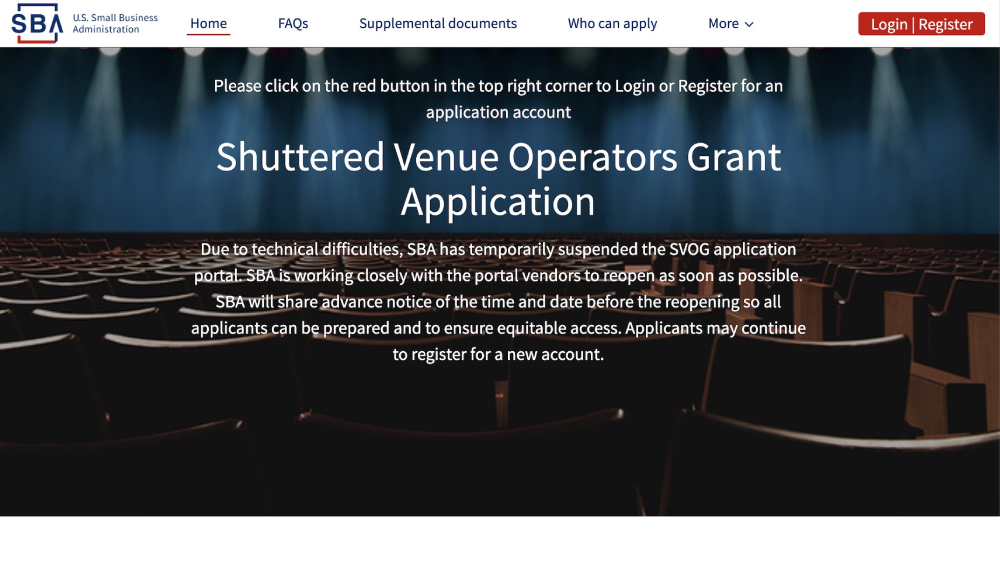 Independent music venues and theaters in the U.S. have been mostly shuttered for 13 months now — and although the #SaveOurStages act was signed into law on Dec. 27, promising $16 billion in relief to those businesses, when the website through which venues could apply for relief finally opened on April 8, it immediately crashed.

After a week of uproar and despair from venues and calls for drastic action from Congresspeople, the SBA on Friday said that it has made progress with the website and hopes — but did not promise — to have it open by the end of this week.

“Over the next few days, our tech team and vendors will remain focused on testing the Shuttered Venue Operators Grant application portal,” the SBA tweeted on Friday. “We are aiming to reopen the portal by the end of [this] week.

“We know this funding is urgently needed now and are doing all we can to reopen with the greatest amount of certainty as possible. As we’ve shared, after our vendors fixed the root cause of the initial tech issues, more in-depth risk analysis and stress tests identified other issues that impact application performance. The vendors are quickly addressing and mitigating them and working tirelessly with our team so the application portal can reopen ASAP and we can deliver this critical aid. We have and will continue to engage with stakeholders on the applicant experience and will continue to share updates regularly.

“Again, applicants will have advance notice so they can be best prepared. Learn more at https://sba.gov/svogrant.”

Congresspeople who supported the Save Our Stages act have called upon the Small Business Administration, which operates the website hosting the Shuttered Venue Operators Grant (SVOG) program, to fix the problem. The problem has caused no small amount of additional difficulty the venues and theaters that have been hanging by a thread waiting for relief and now have to find a way to hang on even longer.

A spokesperson for Senate Majority Leader Chuck Schumer, who signed on as a sponsor of the act and has spoken publicly in its support multiple times, told Variety last week: “We’ve been in touch with SBA to push for them to quickly fix the issues and relaunch the program once all problems have been addressed.”

While sources close to the situation acknowledge that this is likely the first time the SBA has taken on a program of this size and scope, they also acknowledge that venues and theaters have had little to no income for more than a year and the Save Our Stages act passed four months ago, leaving the SBA ample time to prepare.

Also on Friday, the National Independent Venues Association sent a letter to its members stating that a meeting was held that day including multiple SVOG stakeholders and Gene Sperling, who leads the execution of the American Rescue Plan, Zach Butterworth, Director of Public Engagement at the White House and Bharat Ramamurti, Deputy Director of the National Economic Council.

According to the letter, the White House assured stakeholders that reopening the SVOG portal expediently and successfully was a top priority across the SBA and the Administration and that they are working around the clock on rigorous stress testing and further improvement on the system.

“The Stakeholder coalition raised key concerns with the execution of the program including that the application collect all the information required to determine eligibility, establish priority in award and accurately calculate grant awards,” it continues. “We also advocated for a process to cure technical deficiencies before applications are denied and suggested that the priority periods be used as a way to re-open applications incrementally – supporting those most in need first. Finally, we stressed the importance of getting accurate information (timeline and corrected guidance) from the SBA with ample advance notice for our members to prepare for submission.”

The letter also says, “We are thrilled to hear the White House shares our sense of importance for this program and understands its importance to shuttered venues and promoters throughout the country and the urgency of a successful relaunch.”

#SVOG UPDATE: Over the next few days, our tech team and vendors will remain focused on testing the Shuttered Venue Operators Grant application portal; it will not reopen this weekend. We are aiming to reopen the portal by the end of next week.