Sarah Cooper’s ‘Everything’s Fine’ Is a 2020 Time Capsule, but not Much More: TV Review 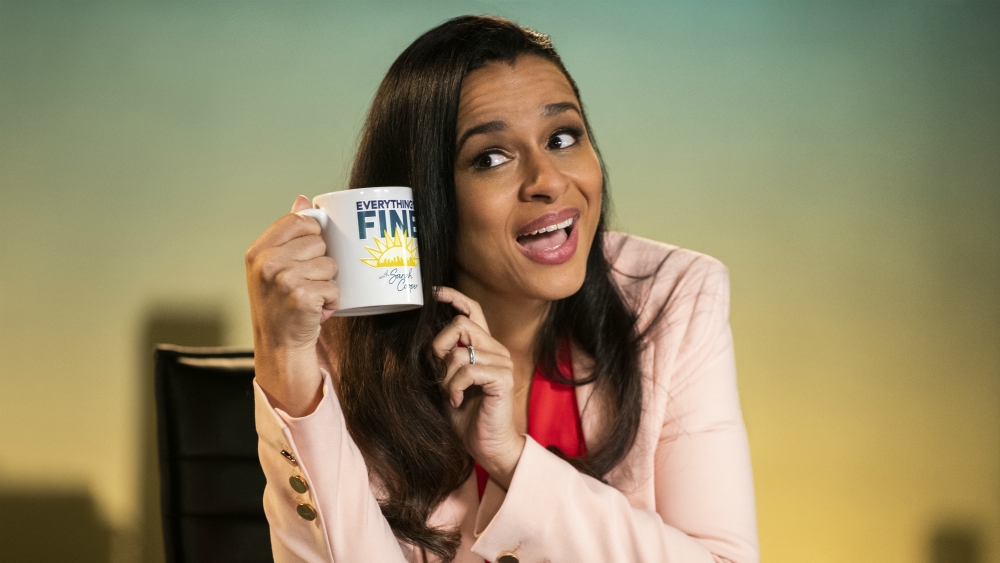 Sarah Cooper may seem like a viral sensation, but that’s hardly the case for those familiar with her comedy career. Since 2014, Cooper focused on hilarious subversions of corporate culture and empty tech speak in books like “100 Tricks to Appear Smart in Meetings” and “How to Be Successful Without Hurting Men’s Feelings,” both based on her time working at a tech company. It happened to be her Trump lip sync videos, which people either love or absolutely do not understand, that brought her the attention of Netflix and celebrities. With Maya Rudolph producing and starring and Natasha Lyonne directing, “Everything’s Fine” is a star-studded event.

Most viewers will probably watch out of curiosity. What could a comedy special from a viral lip sync comedian look like? Well, it looks like a non-stop parade of celebrity cameos and leftover “Saturday Night Live” sketches that often feel too long. As a special that showcases Cooper’s talent and actual voice, it’s even less successful. Cooper is often overshadowed by the celebrities who surround her like Jon Hamm and Helen Mirren. And, in one case, Jordan Black, who just plays a really funny parking lot attendant.

Cooper stars as the host of a surreal morning news show who’s slowly losing her mind as the world falls apart. You would not know she’s losing her mind from Cooper’s performance. She remains fairly one-note even as the studio around her turns into literal hell and she speaks to a dead Winona Ryder. “Everything’s Fine” relies on a narrator to fill in the blanks that aren’t being shown with mixed results. At one point, the narrator tells us Sarah has needed to use the bathroom for hours right before she interviews Megan thee Stallion. There’s no pay off or punchline to that set-up, she just goes about doing an incredibly normal interview with Megan thee Stallion, who plays a normal version of herself. Then they twerk.

In a role that perhaps required the frantic energy of someone like Amy Sedaris, Cooper ends up being the straight man in her own comedy special. Fred Armisen stars as her producer who is seen in increasingly ridiculous personal protective equipment. Rudolph steals the show when she breaks from her weatherperson routine and freaks out over the environment. Cooper’s straight man does work in sketches like her interview with Ben Stiller, who plays a robot CEO of a tech company. Perhaps it’s due to Cooper’s background in corporate tech, but this is one of the few moments where the comedy is actually attached to a message: calling out evil tech corporations that misuse artificial intelligence. It works before the bit changes course and becomes a #MeToo parody.

“Everything’s Fine” is more concerned with being a time capsule of the year 2020 than a vehicle for Cooper’s perspective, humor or thoughts. If you want references to Karens, the MyPillow guy, QAnon, and COVID-19 vaccines, there’s plenty of that. If you want politically smart jokes that satirize Trump’s politics, lack of morals, or the state of the world, there isn’t much of that. “Everything’s Fine” is content to be a streaming sketch version of KC Green’s 2013 comic, “This is Fine.” At most, the jokes directed at Trump don’t have much to say except that he might be a baby an alien made talk.

There is plenty of Trump lip syncing, although some of the humor is lost watching Cooper lip sync on large sets with nice costumes, rather than using random things in her apartment. Cooper lip syncs the entire infamous Trump-Billy Bush Access Hollywood Bus conversation with Helen Mirren. For fans of her viral videos, this is something like a “greatest hit” they’ve been waiting for her to take on. But, outside of that context, the humor relies entirely on thinking it’s funny to watch Mirren lip sync bad words. America wasn’t particularly shocked hearing Trump say these things himself. Seeing these words come from Cooper and Mirren’s mouths reframes the gender dynamics, but it hardly seems relevant to 2020 or anything else in the special.

Cooper, who performed at the Democratic National Convention, has been selected as the political comedian of the moment. But, “Everything’s Fine” offers no moral condemnation of Trump or his policies, it’s just light jokes about the way he pronounces words and his fragile ego. If anything, Trump supporters could very well enjoy this harmless take on 2020 media that simply concludes we’re all in hell. In fact, “Everything’s Fine” takes a harsher view of the media than it does Trump when Cooper’s producers and morning show crew are revealed to be working for the Devil (played by Marisa Tomei). And while Eddie Pepitone is absolutely wonderful as a demon who can’t read and thinks eating bats is a bit much, the payoff doesn’t seem earned. While everyone else is in a surreal hell, Sarah Cooper is doing just fine.

Sarah Cooper Hopes Donald Trump Gets Fired, Even If It Means the End of Her Impersonations

Is there anyone on the planet who hasn’t seen Sarah Cooper’s impersonations of Donald Trump? Her viral videos, set to the soundtrack of the president’s own (gibberish) words, have become ubiquitous during the pandemic. Every time the 42-year-old New York comedian uploads a new clip satirizing the commander in chief, she generates tens of millions of viewers on TikTok and Twitter.

It’s not just Trump’s detractors obsessively waiting to see what she posts next; even his supporters are fans. So Cooper doesn’t necessarily believe the media-obsessed president when he said in an August interview with Fox News that he hasn’t seen her routines. “Are they good or bad?” Trump, at the time, asked the reporter. (The journalist helpfully suggested that Cooper “doesn’t mean it to be positive.”)

Cooper sighs when asked about Trump’s denial (which he delivered, suspiciously, around the same time he threatened to ban TikTok). “I think he’s proven himself untrustworthy enough,” she says. “I don’t know if he has seen them, but he has such a short-term memory problem that he probably forgot them.” She considers for a moment. “He must have seen them,” she says, “but I don’t know if he registered what he was looking at.”

For most of us, Cooper’s channeling of Trump has been one of the only good things to emerge from the pandemic. Inspired by the daily White House coronavirus briefings, where the president rambled from one non sequitur to the next, Cooper quickly became a household name. Her sarcastic expressions and maniacal mannerisms shed a parodic light on how little the leader of the free world was doing as thousands of Americans died. The fact that a Black woman (Cooper is Jamaican American) was so successful at mocking the president made her meteoric rise even more fitting.

“If you listen to any single [Trump family member], they talk a lot and they aren’t really saying anything,” Cooper says. “But it didn’t even really hit me until he was doing his daily briefings. I just recognized that he was saying so many words without any substance. That’s what made me start to lip sync him; I wanted to pretend like I had that power.”

It didn’t take long for the aspiring stand-up, who left her job at Google as a user-experience designer in 2014 to pursue comedy, to land on Hollywood’s radar. Cooper signed with talent agency WME and later guest-hosted “Jimmy Kimmel Live!” She is working on a Netflix special called “Everything’s Fine” (directed by Natasha Lyonne and executive produced by Maya Rudolph) and developing a comedy series at CBS based on her popular book, “How to Be Successful Without Hurting Men’s Feelings.” Gone are the days of hoping that an agent, manager, someone, anyone, may call her back.

“I’ve gone from basically making TikToks at home to talking to Natasha Lyonne and Maya Rudolph every day,” Cooper says. On the phone, she’s soft-spoken in a manner that belies the delusions of grandeur she assumes while mimicking Trump. Her voice is gentle, bordering on exhaustion, as she considers how she ended up in a virtual writers’ room with Rudolph and Lyonne. “I have to kind of pinch myself,” she admits.

For Rudolph, the decision to work with Cooper was a no-brainer. The former “Saturday Night Live” actor, who recently won an Emmy for impersonating Kamala Harris, jokes that Cooper’s videos are “the only way I can absorb Trump.”

“Everything’s Fine” came together quickly, with the goal of getting it on Netflix before the election. Rudolph was immediately impressed with Cooper’s zealous work ethic. She frequently finds herself encouraging Cooper to take breaks and unplug from the internet every once in a while.

“I don’t think she sleeps,” Rudolph says. “Every time she comes up with an idea or someone else does, she takes a stab and tries to fully realize it. It’s nonstop working her butt off.”