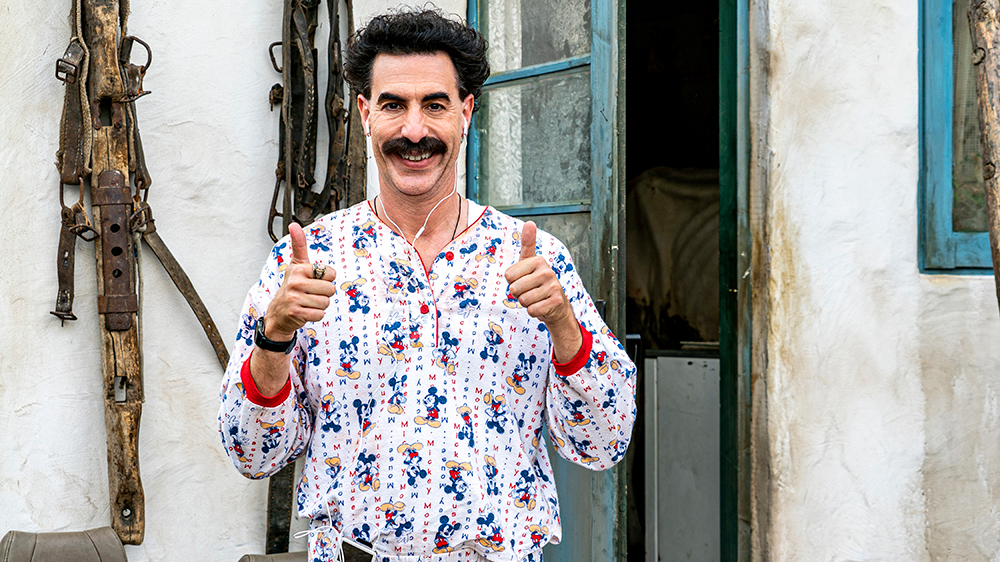 The early-to-mid-2000s, after all, were when Baron Cohen enjoyed his high point of fame, when TV’s “Da Ali G Show” and the 2006 film “Borat,” a mocking journey through the heartland, made comic use of undercover documentation of what Americans are willing to say and do behind closed doors. The classic Baron Cohen act capitalized on widespread distrust of institutions, politicians, and civic society in general; it was entertainment made for a moment in which the mood had turned sour, but in which exposing, say, the hypocrisies of elected leaders or the prejudice of the white populace felt novel and potentially useful. For many among the target audience for “Who Is America?,” Baron Cohen’s new series on Showtime, such aspects of contemporary life hardly need to be exposed—and Baron Cohen’s approach, so good at stripping away bland niceties hiding cruel intent, seems hardly necessary for an era in which the intent is hardly hidden.

What a pleasant surprise, then, that “Who Is America?” feels both as richly comic as anything Baron Cohen has done in the decade-plus since “Borat” and urgently resonant with our own era. The show’s format—using four new Baron Cohen personae in order to expose the nature of contemporary American culture—is particularly effective, moving as it does beyond the boldface names who’ve come forward to say they’ve been pranked by the comic. The first episode, for instance, puts gun lobbyists in conversation with Erran Morad, a former Israeli colonel played by Baron Cohen. “Morad” is traveling the U.S. to learn more about gun policy and to share his full-throated support for a particularly libertine understanding of the Second Amendment; by episode’s end, gun lobbyists as well as past and present members of Congress are on tape endorsing his “Kinder-Guardians” program, designed to teach children of three and four how to shoot.

This is the magic of Baron Cohen at his best: Simultaneously devising bizarre and seemingly impossibly outré bits of social commentary, and knowing the culture well enough to be sure that his targets will be along for the ride. The lengthy “Kinder-Guardians” segment, culminating as it does in a bizarre pro-toddler-riflery PSA endorsed by Dana Rohrabacher and Trent Lott, is the episode’s creative high point. Less engaging is much of what led up to it: An interview between Sen. Bernie Sanders and an Alex Jones-style web-”journalist” (played by Baron Cohen, of course) sees plenty of good jokes but Sanders utterly failing to take the comic bait.

That segment feels a bit like an especially half-baked sort of equal time, working to ensure that the show “feels fair” by pranking the left and right evenly even when the material isn’t quite there. Same with an overlong segment confronting an evidently liberal-minded California gallerist with the artwork Baron Cohen’s ex-con character made out of bodily fluids. The gross-out gag strains patience and credulity, though its point—that liberal folk are forgiving beyond reason—comes through loud and clear.

This is where Baron Cohen’s nihilism can, for a moment, itch and irritate more than enlighten and entertain. His point of view, that not merely both sides but really all people, public figures and anonymous civilians willing to step before a camera, are fallible, silly, and fraudulent. His gallerist target doesn’t come off badly, exactly—just naive and overeager to be seen doing good. These values, hardly the best of humanity, still seem not quite worthy of pillorying. It feels like a sign of just how little Baron Cohen’s ultimately successful comedic formula has evolved since his mid-2000s heyday that he has anger enough to spare for everyone, but it accidentally, and uncomfortably, ends up fitting neatly into an era of free-floating contempt. Baron Cohen’s in-your-face willingness to test the limits of tolerance ends up feeling as of-the-moment as refreshing Twitter.

The gallerist segment, or another in which a liberal Baron Cohen character berates conservative South Carolinians with the details of his wife’s practice of bestiality, were oddly more engaging than the thought of a much-publicized segment, to come in the show’s future, with Sarah Palin. (The former vice-presidential candidate has long been an appealing subject for comics, but she’s been out of the Alaska governor’s office since 2009 and has become a marginal political figure since then. It’s time to move on.) In both, Baron Cohen is not exactly successful in two ways; his routine grows tiresome long before the sketch has ended, and he also fails to get what it sometimes seems he wants above all else, the violent reaction, the confrontation that ends in tears or blood.

But he proves some larger point: Both the California gallerist and the South Carolina Trump delegate hear him out for as long as he’s willing to speak, and plainly force themselves to suspend judgment. They’re less hypocrites or buffoons than simply patient and polite. (And the gallerist really seems to love Baron Cohen’s outsider art.) Who is America? It’s more than its leaders—it’s all of these silly and benighted and strange and idiosyncratic people who voted for or against them. They’re people for whom you may sense, at moments, a flickering of something new from Baron Cohen: Affection. These people’s civility may be wildly misplaced and misjudged, but it’s there, sitting strangely at the center of the least civil show on TV. Some traditions, it seems, are hard even for a comic as gifted as Baron Cohen to push past.