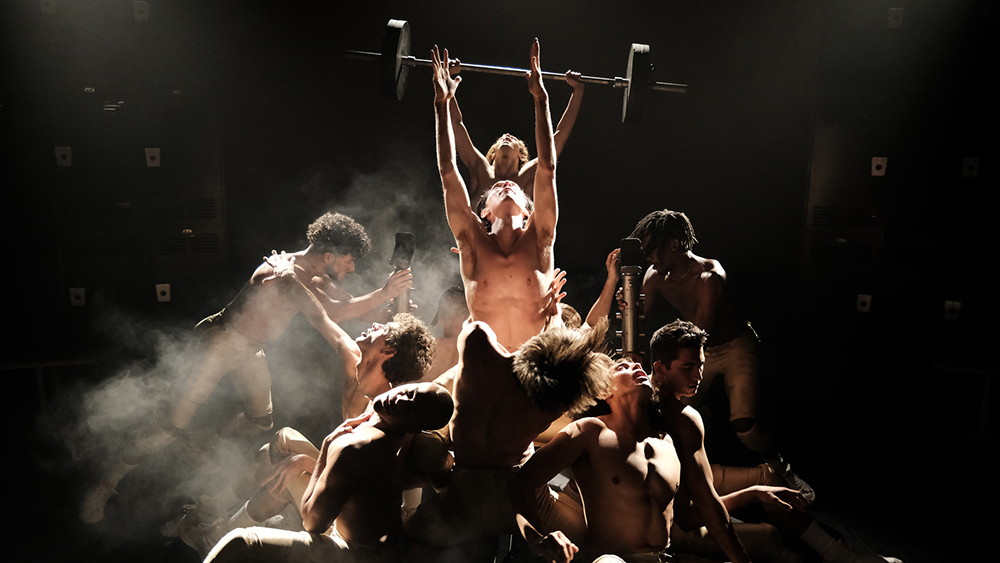 SPOILER ALERT: Do not read if you have not seen “Euphoria” Season 2, Episode 7, “The Theater and Its Double.”

When Ryan Heffington set out to choreograph the dance number in the penultimate episode of “Euphoria” Season 2, he took a cue from the song it’s set to, Bonnie Tyler’s “Holding Out for a Hero.”

“I knew it was — and had to be — larger than life,” Heffington tells Variety of the dance, which takes place during Lexi’s (Maude Apatow) play and features over a dozen men in shiny gold football pants gyrating against work out equipment — and each other — in the locker room. Ethan (Austin Abrams) stars in the dance as a character mirroring Nate (Jacob Elordi), whose sexuality (and homophobia) has been bottling underneath the surface during the past two seasons.

When Heffington — who choreographed “Tick, Tick … Boom!” and several Sia music videos — first talked with show creator Sam Levinson about the scene, he remembers the initial script calling for “tons of baby oil and rubbing and massaging,” and that it “would be super homoerotic to the nth degree.”

Heffington says Levinson “wanted David Bowie to look straight” in comparison to the dance. “So that was a really good launching point of where I should go with this piece,” Heffington says.

From there, Heffington and his assistant Ryan Spencer began conceptualizing the piece, leaning on Tyler’s ’80s hit and teenage hormones to inspire the movements.

“It’s based in the psyche of a teenager, so I wanted it to have this definite humor foundation to it. In high school, boys are all about ejaculation and the senses being sexual 24 hours a day, so I wanted to get as much of that into this piece as possible,” Heffington says. “It was just an ode to us boys in high school. There’s a lot of flexing, and it’s campy. When you think of high school plays, they’re a little campy sometimes. That’s why we love them. So I wanted to honor that as well — that it’s not a professional production, even though the budget was way over the top.”

He then handpicked professional dancers to join Abrams in the number, making sure they were comfortable with its content and looked as though they could pass for high schoolers. “I wanted people that would have fun with this piece and not have it weigh on their psyches, you know, that it was super homo — that we could celebrate homoeroticism and make it tongue-in-cheek,” Heffington says of casting.

As for Abrams, who didn’t have much dance experience, Heffington chose to approach the choreography more like a scene, working with him to nail the motivation behind the dance.

“We talked a lot about this being a fraction of Nate’s psyche, and maybe this would be an ultimate fantasy of Nate’s — if indeed, he’s gay or bi or whatever,” Heffington says. “But it was complicated choreography that moved really fast, and I think once Austin could see that we trusted him and his choices as well, he blossomed as a dancer. We worked really hard on the movements that were challenging for him, and he brought it. He was never fearful, and that’s the best type of actor to work with.”

Heffington says he only had “four or five” days of rehearsals with the dancers until it was time to film — but the grind was worth it when he got that first reaction from Levinson. “He said, ‘You’re a fucking genius.’ So I knew I was doing something right,” he says.

In true camp fashion, the piece ends with two medicine balls and a punching bag coming together to form a penis, which then ejaculates streamers. Of the finishing moment, Heffington says: “It was just like, this is why this whole piece is happening — based on this lower chakra, grunt, caveman-type existence as a teenager. So let’s just pay tribute to the peen.”

Of course, social media was set ablaze by the dance number when “The Theater and Its Double” premiered Sunday night, with many users praising its tongue-in-cheek nature and calling it the best use of “Holding Out for a Hero” since “Shrek 2.” Though he doesn’t have Twitter and therefore missed some of the chatter, Heffington hopes his work can inspire others to push the envelope themselves.

“‘Euphoria’ is fictitious — it’s an exaggerated take on the lives of teenagers and addiction, homophobia, the fear of coming out. I hope they understand that it’s a depiction, and not real life,” Heffington says. “Let’s enjoy this art that Sam has created, and not take it to heart that this is how it is or how it should be, but let it inspire you to make more art.

“Let’s up the game at the high school recital — let’s bring it!”