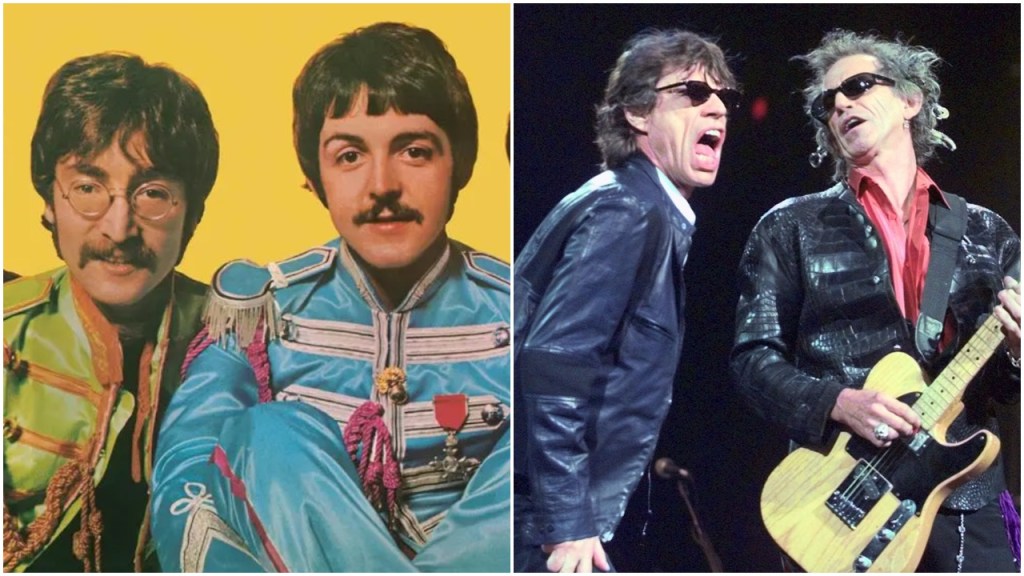 Although it appeared to the public that there might be a bit of beefing going on between the Rolling Stones and Beatles — shades of 1967 — Keith Richards says in a new interview that the matter was quickly resolved, with Paul McCartney reaching out to him to assure him no contemporary slight was intended.

The continuation of their alleged friendly feud came up in a discussion the Stones’ guitarist had with writer Brian Hiatt for an episode of “Rolling Stone Music Now,” in which Richards also discussed what it was like to hit the road without their late drummer Charlie Watts, and whether they’ll be able to complete the studio album he started with them.

Asked about 2021’s minor Stones/Beatles controversy, Richards said, “I got a note from Paul about that, saying ‘I was taken totally out of context,’” Richards says.

The possible tiff came up with McCartney was profiled in a lengthy New Yorker piece and was quoted by the magazine’s famous editor as saying, “I’m not sure I should say it, but they’re a blues cover band, that’s sort of what the Stones are. I think our net was cast a bit wider than theirs.” It followed similar comments McCartney had made to Howard Stern to 2021, when he remarked, “They are rooted in the blues. When they are writing stuff, it has to do with the blues. [The Beatles] had a little more influences. There’s a lot of differences, and I love the Stones, but I’m with you. The Beatles were better.”

In the new podcast, Richards says McCartney blamed it on the New Yorker not understanding that he was talking about first impressions, not current thoughts.

“He said (to the New Yorker), ‘That’s what I thought when I first heard them.’ Because Paul and I know each other pretty well. And so when I first read it, I said, ‘Ahhh, there’s been a lot of deleting and editing going on here.’ And the next day I got a message from Paul saying, ‘If you’ve read this shit, it’s all out of context, believe me, boys.’”

Hiatt wondered if this didn’t seem credible because the Stones and Beatles did have a history of minor snipes, with Richards having once called “Sgt. Pepper’s Lonely Hearts Club Band” “rubbish.”

“That could have been the thing, but Paul isn’t that way,” Richard said. “I felt for him. He replied so quickly on that. If he had meant to say it, he wouldn’t have bothered replying. Hey, Paul’s a great guy, man. I mean, Jesus Christ, look at the songs he’s written. You can’t knock a guy like that. We let little things come out in the press and kind of ignore ‘em.”

(Read Variety‘s full history of the half-century-long “frenemy” relationship between the Stones and Beatles here.)

Even though McCartney apparently cleared the air with Richards in his note, that didn’t stop Mick Jagger from joking about it when they were headlining L.A.’s SoFi Stadium a few nights after the remark made the news last October. Jagger jibed to the audience that McCartney was backstage and would be “joining us in a blues cover.”

Richards was also asked about the status of the Rolling Stones album that had gotten underway before Watts died last year, and spoke about Steve Jordan replacing Watts on tour last fall and possibly in the studio this year.

“As far as status goes, I can’t really report anything,” Richards said in the podcast. But when Hiatt asked if it was true that Watts had finished up his parts for an entire album before he died, Richards says: “No, it’s not true at all. I mean, Charlie Watts was playing along… He did some stuff with Mick, and we already have quite a lot of stuff in the can with Charlie from last year. But Charlie Watts certainly wasn’t in the mind of, ‘I’m going to record things because I’m not going to be here.’ He isn’t that kind of guy, and he didn’t think like that. Charlie would work if somebody said, ‘Hey, I’ve got a couple of songs, drop by and play.’ And that’s the way it was. We do have a lot of stuff with Charlie Watts still in the can, because we were halfway through making an album when he died. But goddam, I loved that man.”

Will Jordan step in to finish the album? “Yeah, I guess,” Richards said, sounding less than 100% committed to the idea that the sessions will soon pick up, with the word “if” popping up. “I mean, this is one of the things that we’re gonna be having to sort of sort out this year. So of course, I mean, if we want to carry on recording, then we’re gonna need drums — and Steve Jordan.”

Richard talked at length about his musical friendship with Jordan, who was a part of his band the X-Pensive Winos, which backed him on the 1992 solo album “Main Offender,” being reissued today.

“Actually, at the beginning of the tour a few months ago, I was, ‘Oh no, I cannot do this without Charlie.’ Except Charlie was saying to me (when he fell too ill to carry on with the tour), ‘Listen, Keith, you can do it with Steve. You’ve done it many times. He can take my seat anytime.’ And he talked me into it. Not that I had to (be), because I knew Steve could do it. But you just wonder how the thing’s gonna coalesce. I was beautifully amazed by how everything fell into place. And I’m looking forward to doing some more…

“It felt like the new blood, fresh blood in there and it felt very energetic… Steve was watching himself, saying ’I don’t want to overdo it’,” referring to a much more demonstrative playing style than Watts had. “But he has a feel for the way Charlie Watts plays that makes it very, very easy for us to continue without going through incredible convolutions. Steve’s a consummate pro and a great lover of Charlie Watts’ style. ….‘I can do it like Charlie.’ ‘I’ll leave it to you, Steve, like I would if it was Charlie sitting there, I would leave it to Charlie. And now you’re sitting there; I’m gonna leave it to you, Steve.”

Said Richards, “We had a great time on tour and I see no reason why we shouldn’t continue on to this year.” As indeed they will, as the Stones announced just a few days ago that they will do 14 shows in Europe in June and July to commemorate the group’s 60th anniversary. “Who can wrap their head around 60 fucking years? It all seems impossible it’s been that long.”