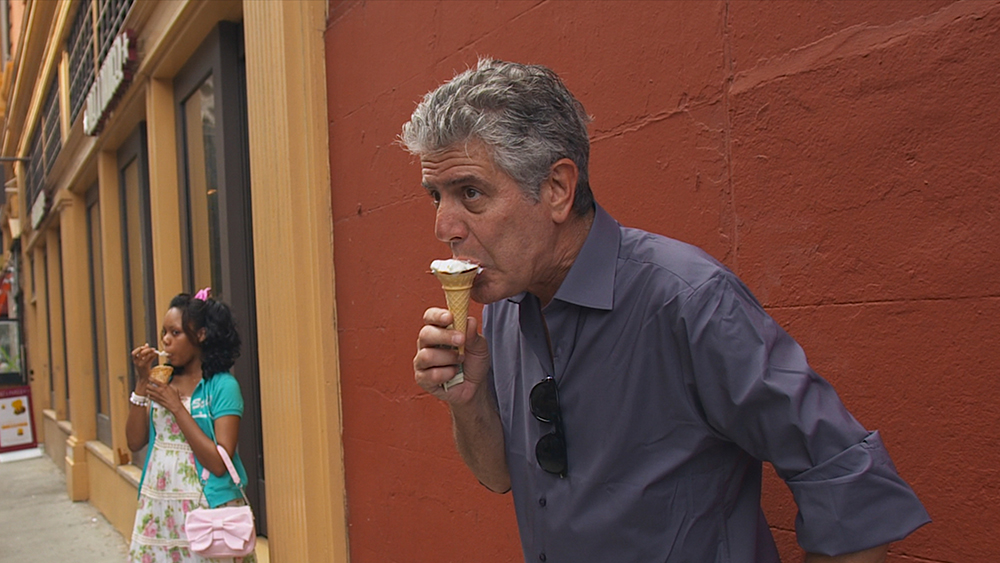 The documentary, chronicling the life of the late celebrity chef Anthony Bourdain, landed in eighth place on box office charts, which is pretty good for a non-fiction film. Its ticket sales, averaging to a strong $2,050 per location, surpassed Roadside’s spy drama “The Courier” ($1.88 million) and A24’s social media satire “Zola ($1.2 million) to land the biggest opening weekend of the year for a specialty film. It also secured the top debut for a documentary in 2021, outperforming Searchlight’s “Summer of Soul,” which opened to $650,000 from 752 screens.

Unlike “Black Widow,” “Space Jam: A New Legacy” and other recent releases, “Roadrunner” is only playing in theaters and won’t be available on streaming services or TV until a later date.

For director Morgan Neville — whose credits include “Won’t You Be My Neighbor” about the beloved television personality Fred Rogers and the pop music portrait “20 Feet From Stardom” — the launch of “Roadrunner” marks the largest opening weekend of his career. “Won’t You Be My Neighbor” is currently the highest-grossing biographical documentary with $22 million in U.S. ticket sales. In its first weekend on the big screen, that film kicked off with $475,419 from 29 theaters.

“Roadrunner” had a significantly bigger head start compared to the equally acclaimed “Won’t You Be My Neighbor” because the pandemic has dramatically shifted the way indie movies are released theatrically. In pre-COVID times, specialty titles traditionally opened with platform releases, meaning a film would play in select theaters in Los Angeles and New York City to build awareness and boost word-of-mouth, before expanding nationwide. That practice proved impossible amid the global health crisis because multiplexes in California and New York were among the last in the country to reopen. Lisa Bunnell, the president of domestic distribution at Focus Features, says she doesn’t foresee “Roadrunner” broadening beyond its current theater count and predicts the pandemic may have permanently altered the preferred rollout for indie films.

Even with its nationwide release, the film predictably had the best turnout in New York City, Los Angeles and San Francisco and was a boon to arthouse theater owners, who have been particularly hard-hit by the turmoil of the movie industry. “Roadrunner” sold the most tickets at Angelika Film Center in Manhattan, followed by Tampa Theatre in central Florida. Other top-grossing theaters were Belcourt Theatre in Nashville, Brooklyn Academy of Music and Alamo Drafthouse locations in Brooklyn and Austin.

“It’s rare for any documentary to make it into wide release,” says David A. Gross, who runs the movie consulting firm Franchise Entertainment Research. “The market is still quite sluggish for smaller movies, but that doesn’t detract from this weekend — those are good numbers.”

Before the movie opened, Focus Features launched a pop-up restaurant inspired by the famed New York eatery Les Halles, where Bourdain worked as the executive chef. The documentary begins as Bourdain’s career takes off with the release of his tell-all book “Kitchen Confidential” and chronicles his rise through the success of his culinary travel shows “No Reservations” and “Parts Unknown.” He died by suicide in 2018. The speciality studio also partnered with movie theater chains to offer recipe cards of Bourdain’s favorite meals. Additionally, patrons were offered the option to donate to the Suicide Prevention Hotline as they bought their tickets online.

“People are hungry to see this kind of stuff in theaters,” says Alamo’s head of programming Kayla Pugh. Though Alamo Drafthouse is known for its in-theater dining options, the chain didn’t plan any specific programming tied to the movie’s release. Still, Pugh says, “because our audience associates us with food and film, it worked to have a doc about a great chef. It’s a sweet spot for us.”

“Roadrunner” sparked mild controversy on social media after Neville revealed he used AI technology to create a deepfake of Bourdain’s voice. Yet it doesn’t appear to be affecting ticket sales. “It’s social media chatter,” Bunnell says. “I haven’t heard anything [about it] from exhibitors.” The doc also made headlines about Neville’s decision to not interview Asia Argento, whom Bourdain was dating when he died.

Looking ahead, there are several upcoming films that could make a dent at the indie box office including A24’s “The Green Knight” with Dev Patel, the Focus Features drama “Stillwater” starring Matt Damon, and Searchlight’s “The Eyes of Tammy Faye” with Jessica Chastain. For “Roadrunner,” Bunnell says the pandemic has made it tricky to predict the film’s final box office prospects, but she anticipates it will have a long run in theaters.

“We’re hopeful that it will have a great run throughout the summer and a positive sign we’re moving back towards normalcy for our business and our partners in exhibition,” Bunnell says.