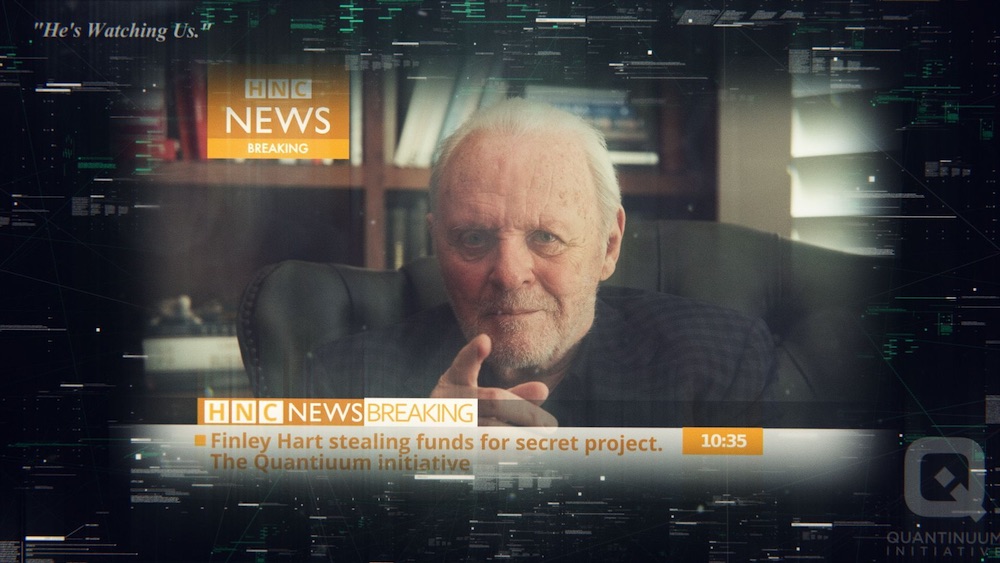 The mild initial curiosity stirred by Zoom-shot movies died quickly, because so few of them were watchable, and because filmmakers quickly found workarounds to create more fluid entertainments while still observing COVID precautionary measures. Thus “Zero Contact” arrives as a novelty that’s already more than worn out its welcome, aiming for dubious additional distinction as “the world’s first star-powered feature film NFT.” (It was released in that form last September — whether anyone actually purchased it as such is unknown.)

We’ll just gingerly step around that factoid, as the aptly named “Zero Contact” has plenty of more tangible ways in which it is a steaming pile of nada. Producer turned first-time director Rick Dugdale and screenwriter Cam Cannon’s would-be thriller has five globally-scattered protagonists yelling at their screens during a conference call in which the fate of all humanity supposedly hangs in the balance from some murky high-tech threat.

All telling, no showing, the tediously convoluted opener for a planned trilogy is not at all brightened by intermittent appearances from Anthony Hopkins, the principal “star power” here. It’s hard to believe any viewers will return for two (presumably non-Zoom) in-progress sequels once they’ve waded through this Lionsgate release.

Opening fictitious news footage encapsulates the career of Finley Hart (Hopkins), “enigmatic” genius behind an Apple-like tech empire he was eventually ousted from. Already widowed, he then purportedly died of kidney failure, orphaning a now-adult son (Chris Brochu as Sam) he pretty much ignored while alive.

Thus the junior Hart, caring for a baby at home while his wife is out of town, is not particularly pleased when a mysterious package delivery prompts an online meetup with four other people currently or formerly tied to Hart Enterprises: Snarky tech chief Trevor Williams (Aleks Paunovic) in Seattle; humorless German legal rep Veronica Schultz (Veronica Ferres); Japanese “chief innovation officer” Riku Matsuda (TJ Kayama) in Japan; and board of directors chair Hakan Nordquist (Martin Stenmarck) in Sweden.

They’ve been called upon in order to reactivate the Quantinuum Initiative, some kind of machine based on Finley’s “singular truth” discovery that was apparently shut down by his foes within the company. Just what it is or does we never quite figure out, though terms like “alien technology,” “AI,” “teleportation” and “resetting the space-time continuum” get tossed around. It is also said that if it is not reactivated pronto, “a globe-killing disaster event” will ensue.

Well, that certainly sounds momentous. Not enough so, however, to effectively distract us from being stuck with five quarrelsome strangers on a Zoom call. Soon one of them is dead, while the others suffer home invasions and other threats from the project’s shadowy enemies. To the extent that we see these things happen, we do because the protagonists carry around their devices to film themselves, for no obvious reason. Or perhaps (as onscreen graphics suggest), those devices are filming them without their knowledge. None of which makes “Zero Contact” any less a movie about a bunch of people talking conspiratorial nonsense while acting very hard at appearing frightened.

Needless to say, that places the performers in a bind, having to run gamuts of urgent emotion in a static contextual vacuum. They (also including some subsidiary figures, including spouses) cope variably well under the circumstances. Arguably the worst showing is by Sir Anthony, whose arbitrarily scattered interview flashbacks and video messages have him delivering improvisational-sounding gobbledygook with the twinkle-eyed self-indulgence of a veteran performer certain his every tic and utterance will delight. It’s a particularly awkward assumption to be so wrong about.

“Contact” means to set up an epic, globetrotting puzzle combining elements of “Atlas Shrugged” and “The Matrix,” coincidentally also both trilogies. But there isn’t a moment here that doesn’t scream “COVID-necessitated contrivance,” or takes on a convincing narrative life of its own. While some thought went into production designer Tink’s settings, the notion that this film was shot in 17 countries plays as a worthless gimmick, since we’re almost entirely trapped in rooms with characters’ laptops and phones. Klas Wahl and Anders Niska’s mostly electronic score tries to whip up high tension around onscreen events that stubbornly refuse to become exciting in the least.

And just when you think this nothing-burger can’t get any more exasperating, it spends a full 10 post-fadeout minutes on final credits. Oh, there’s more: As names crawl by, we are meant to be impressed by behind-the-scenes footage showing cast and crew applauding one another’s wizardry in making a Zoom movie. It’s enough to make you nostalgic for the simpler times of watching paint dry.

“Zero Contact” opens May 27 in 13 U.S. theaters, simultaneous with digital and on demand launch.