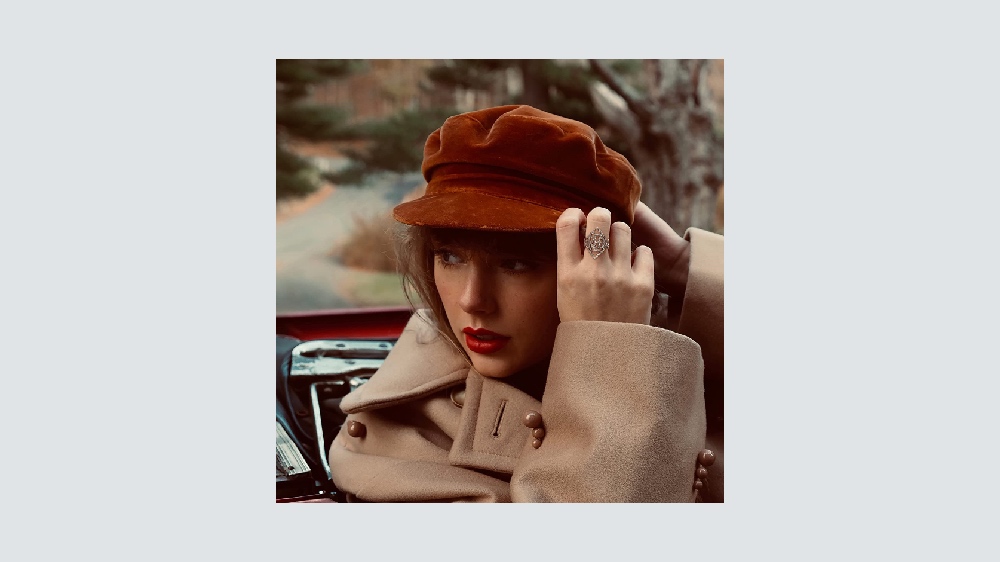 “What’s past is past,” Taylor Swift sang nine years ago on “Begin Again,” one of the original tracks from “Red.” And what a damnable lie that was. Sure, it was said in the context of one of the few unabashedly uplifting songs on that 2012 release, so she could be forgiven for getting caught up in the ray of hope the tune provided to cap off an otherwise not-that-optimistic album. But everyone knows that by then she’d established herself as a pop music giantess who built a large part of a career on agreeing with William Faulkner that “the past is never dead. It’s not even past.” At least it’s not past if have total lyrical recall of key scenes with the One That Got Away, and you’re convinced that he kept your scarf for sentimental reasons and not because it, like, got stained in the wash.

There was something about “Red” that felt a little meta: an album about obsession that we ourselves became obsessed with (speaking for the Taylor Nation, anyway). Swift has gotten even better since then; pound for pound and track by track, 2020’s “Folklore” and “Evermore” are, very arguably, more consistent records, as you’d hope for from a top-flank singer-songwriter who’s pushing herself. But especially if you grew up with her, maybe you never get over the first time you felt she got you Not Getting Over It. There was exhilaration in that identification: one of those original “Red” song titles could have been amended to “Sad Beautiful Tragic Giddy.”

There was more where that came from, and it’s arrived in the form of “Red (Taylor’s Version),” the second in her series of re-recordings of her original seven-album Big Machine catalog. (Why is she redoing all those albums? Because she hasn’t gotten over it, of course… Hold this, Ithaca Holdings, right?) As with the first in the series, “Fearless (Taylor’s Version),” which came out earlier in 2020, much will be said and written about how identical the remakes are or aren’t to the originals. (Does she utter the word “What?” in “We Are Never Ever Getting Back Together” with more or less insolence than she did in 2008? You be the judge.) A general initial impression is that the more acoustically based stuff is easier to exactly recreate without producer Nathan Chapman than her very first forays into electro-pop are without Max Martin, although the differences may be hard for the non-Swiftie ear to immediately be heard. She does have the benefit of having nearly all the original producers back on board, save for those two — Dan Wilson, Jacknife Lee, Butch Walker and even Martin’s longtime partner, Shellback, doing his part on three songs. Swift’s foremost co-producer on the remakes, producer Christopher Wray, who fills in for both Chapman and Martin, definitely merits some plaudits as the most skilled mimic this side of Dana Carvey.

But it’s the “From the Vault” bonus material we’re really anticipating on these new albums; the A/B-ing on the recreations can be left to the pros. On “Fearless (Taylor’s Version),” the new-old stuff was just of moderate interest, since Swift was not yet as crafty a writer as she’d be just a few short years later … and also, let’s be candid here: You weren’t really waiting for more forensic information on what went wrong with Joe Jonas, were you? Whereas the answer to that basic question with “Red” (filling in the blank accordingly) is: Yes — not just out of morbid celebrity curiosity, but because by the time 2012 arrived, Swift had graduated from winsome country-pop petulance into a poet, with every detail that seemed to corroborate what fans knew from real life making her feel kind of like a journalist as well as modern-master librettist.

“Red (Taylor’s Version)” has nine previously unrecorded songs that kick in after the recreation of the original album (plus O.G. bonus cuts like “Ronan”) is over. Narrow that down to six, if you want to just to consider songs that have never heard in any form before, because “Better Man” and “Babe” were later given to Little Big Town and Sugarland, respectively, to become enormous country hits, and the new 10-minute version of “All Too Well” previously existed in five-and-a-half-minute form, of course. But we’re not going to disregard those — especially not that latter track, which has been the holy grail of fandom ever since the secret of its long-form existence got out.

An assessment of those nine new-to-us numbers, with relative-scale grading for a collection of songs that doesn’t have a real dud in the bunch:

Little Big Town’s hit cover of a few years back already established that Pearl Jam had some competition for who had the better “Better Man.” (OK, Pearl Jam wins it, but not by that huge a margin.) There’s solid country craftsmanship but also a palpable sense of real regret and sorrow here. And besides having the benefit of the true authorial voice, Swift also does LBT’s version one better by having both lap steel on the track and the London Contemporary Orchestra. (There are a lot of strings in these bonus tracks, mostly arranged by Bryce Dessner, getting some moonlighting gigs from his producer brother Aaron.) On “Fearless (Taylor’s Version),” it was easy to see that the outtakes got left on the cutting room floor because they weren’t quite A-grade. But in this case, you’d have to say “Better Man” got the shaft because Swift was already moving on from country sounds with “Red,” even though it took her officially announcing it circa “1989” for slow thinkers to get it. (Rating: 4/5)

Holy hell, is this a good match-up  … modest as it might initially sound. Had Swift just done a solo recording of this vault number, it might not be nearly the standout it is with Bridgers aboard for a full-on verse-trading duet, not just harmony vocal. This wryly spooky little number was written as a “New Kid in Town”-type scenario, with Swift imagining a possible impending obsolescence and wondering: “Lord what will become of me / Once I’ve lost my novelty.” Things get more interesting as she fantasizes a replacement: “I know someday I’m gonna meet her / It’s a fever dream / The kind of radiance you only have at seventeen / She’ll know the way and then she’ll say she got the map from me / I’ll say I’m happy for her then I’ll cry myself to sleep.” The prescient thing is that Swift goes to pains in the lyrics to imagine her fill-in as being exactly five years younger than she is. Guess what the age difference is between Swift and Bridgers? Five years. What kind of evil genius does it take to will that into being? Fortunately, these words didn’t prove all that prophetic, otherwise — this town is big enough for the singer-songwriter brilliance of both of ’em. (Rating: 5/5)

It’s like “Better Man’s” slightly less good-looking cousin. There was something tangy about the sound of Jennifer Nettles’ voice on the Sugarland version that made the repetition of the title word a little more palatable than it is here. But then there are the trumpets, saxes and flutes that enter in late into Swift’s version and elevate the track into something that swings a lot more than the hit country cover did… so, point, Swift. (Rating: 3.5/5)

“Message in a Bottle”

How did a bop this strong — and such a strong shot for hit single status — get left off “Red”? This was a Max Martin/Shellback co-write/co-production that somehow didn’t make the cut alongside the trio of tracks that did. Martin didn’t make the return trip to re-produce this version, but Shellback did, along with umlauted new partner Elvira Anderfjärd, and it’s thoroughly infectious. Yet in the end, it’s not so difficult to figure why it might’ve gotten the shaft when the running order was settled upon: As good as it is, you can imagine almost anyone in pop singing it, and aside from the kind of telling reference to freckles that fans love, it feels slightly impersonal in a way few of her released songs do. Still… it sounds like a hit, nominally more generic or not. (Rating: 4/5)

“I Bet You Think About Me” (featuring Chris Stapleton)

What would it sound like if “Betty” met Garth Brooks’ “Friends in Low Places”? Now we know. It’s another track that probably got jettisoned primarily because it was too country — albeit, at least in this newly recorded arrangement, a rowdier kind of country than Swift was pulling off at the time. The “Friends in Low Places” comparison is because Swift paints herself as a proud rube who knew she didn’t fit in with her upper-crust, Beverly Hills-bred boyfriend and his allegedly snobby clique. “I bet you think about me when you’re out / At your cool indie music concerts every week” — a reference that would have been one “indie” slam too many if it’d been released on the album alongside “We Are Never Ever Getting Back Together,” but which serves now to shout in capital letters that it’s about the same guy as that song, with additional damning details about his “organic shoes and million dollar couch.” If there’s a call-forward moment, it’s when she sins, “I bet you think about me when you say ‘Oh my god / She’s insane, she wrote a song about me’” — embracing the image of the crazed ex in a way she’d go all-in with on “Blank Space.” Stapleton contributes a harmony vocal, not true duet part, but it’s a good-and-loud one. (Rating: 5/5)

The maturity is welcome as Swift looks to lift up a depressed and cynical friend or beau. A slow grower, with some nice, bittersweet trumpet and sax flourishes from Jack Antonoff. (Rating: 3.5/5)

Sheeran becomes the first and probably last fellow star to get two full duets on a a Swift album, since he already had one on the O.G. “Red.” It’s the first in a line of Swift songs about wanting to get away from prying eyes with a lover — think of it as the much kinder, gentler precursor to “1989’s” “I Know Places.” (Rating: 3.5/5)

A happy-sounding, uptempo pop song about missing someone… maybe a little too pleasant to convey much in the way of real angst, even for fans of ironic melodic juxtaposition. Yet, much like “Message in a Bottle,” it’s easy to imagine this as a top 40 hit, then or now, and one it’d take you a while to get tired of. Espionage, the Norwegian duo that co-wrote and now gets to co-produce it, didn’t go on to do any tracks with Swift that did get released, but they must be feeling pretty vindicated as this becomes a global bop right now. (Rating: 3/5)

“All Too Well (Taylor’s Version)”

Co-writer Liz Rose says she was brought in on this track because Swift needed some advice in cutting down its epic-ness. Most of us might feel like we could have probably broken out the red pens and offered the same advice as Rose’s: “Well, Taylor, maybe you’ll want to lose the verse that says ‘And you were tossing me the car keys / “Fuck the patriarchy” keychain on the ground.’” But it’s a good thing she did’t throw away those extra four and a half minutes’ worth of lyric scraps — “All Too Well” only gets better turned into a stream-of-consciousness epic ballad, profane keychains and all. This original version is overstuffed with more references to someone whose name sounds like Drake Hillengall than you would have thought possible even for someone as prone to spe