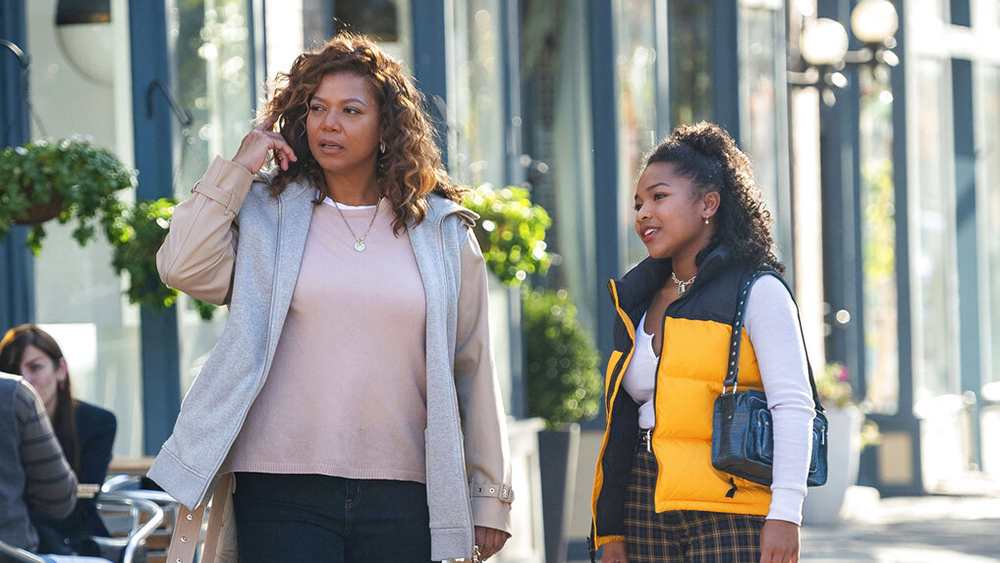 Queen Latifah is an enigmatic hero in the 30-second teaser for CBS’ “The Equalizer,” which is a reimagining of the 1980s series of the same name starring Edward Woodward.

Latifah stars in the series as Robyn McCall, a single mother with a mysterious background who uses her skills to protect and defend those who cannot do so for themselves. While acting as a guardian angel to others, Robyn is also seeking her own redemption.

The teaser introduces Latifah’s character and her daughter, Delilah, played by Laya DeLeon Hayes. “What’s up with you, mom? Out of nowhere you quit your job last month, you wanna talk about it?” Delilah asks in the clip, to which Robyn responds: “It’s complicated.” Cue a montage of Latifah’s character wielding guns, dodging explosions and saving people.

Chris Noth, who portrays an ex-CIA director, also appears in the teaser, giving viewers a hint about Robyn’s past career. “This new side gig of yours is raising questions to the CIA,” Noth’s character says. “I don’t work for them anymore,” Robyn quips.

Set to premiere Feb. 7 after the Super Bowl, the series marks the second reboot of “The Equalizer” franchise, following the 2014 film starring Denzel Washington and its 2018 sequel. The cast also includes Tory Kittles, Lorraine Toussaint, Liza Lapira and Adam Goldberg.

Besides her starring role, Latifah is also credited as a co-creator of the series alongside Richard Lindheim, who was one of the creators of the original series. John Davis, John Fox, Debra Martin Chase, Andrew Marlowe and Terri Miller serve as executive producers.

Watch the teaser below.

She’s the one you call when you can’t call 911. #TheEqualizer premieres February 7 after the Super Bowl on @CBS and @CBSAllAccess. pic.twitter.com/Hsu3Ubs41a

Queen Latifah has long been a trailblazer for women in the industry, transitioning from rapper to actor to producer to entrepreneur, while emphasizing the importance of having a seat at the table when it comes to business.

And with her latest venture, the Queen Collective — a mentorship initiative designed to give multicultural women directors a platform (and the financial resources) to get their projects made — the multi-hyphenate star is focused on providing young filmmakers a meaningful way to move up in Hollywood and change the nature of the industry as a whole.

“We’re talking about layers and layers and layers of systemic racism and classism that’s sort of like worked its way into every fabric of our society,” Latifah told Variety over the phone Thursday. “It’s not something that’s going to get dismantled overnight, but each person who has an opportunity to be their own boss and tell their story their way, gives you an opportunity to just see something through a different lens.”

It’s a powerful position that Latifah knows well, after co-founding her production company Flavor Unit Entertainment in 1995 and executive producing films since 2013.

“When you look at the stats of what happens behind the camera, how these women hire is also indicative of how we can solve the problem,” Latifah added. “Because they hire much more diversely, which gives opportunity and experience to various people of diverse backgrounds, so it continues to build the pool of people with experience that directors and producers will want to go to as they continue to work in our business.”

In another parallel, the Grammy-winner and Oscar-nominee embodied another trailblazer earlier this year, playing Hattie McDaniel (the first Black person to win an Oscar, for her performance in “Gone with the Wind” in 1939) in the Netflix limited series “Hollywood,” which imagined a more-inclusive vision for Tinseltown’s Golden Era. McDaniel’s name has been back in the headlines this week as HBO Max decided to temporarily pull “Gone with the Wind” from its lineup, a move that Latifah agrees is the right call. “We’re gonna have a lot of places where people have hiccups,” she explained. “It’s not just about the knee jerk reaction and get rid of you. No, it’s about ‘Okay great, let’s fix this and hopefully make it move forward.”

“Her story is an important story and unfortunately her story is not a unique story. There are so many actors of color that were treated so disrespectfully in her time and faced so many challenges,” Latifah explained. “Hattie McDaniel was gifted, but she was relegated to certain types of roles and when you have to decide between putting food on a table or playing a certain role, it is very difficult to make those decisions. And that’s the position a lot of Black actors were put in at that time … and that’s still been happening. It’s been happening up through the ‘80s and ‘90s for sure —you know, play a rapist in this role, play the mugger in this role, play the murderer in this role, or nothing at all.”

“It could happen again if we don’t say vigilant and make sure that our stories are told properly,” Latifah added. “Look at me, I am the example of breaking down walls. If you would ask any agent back at my agency back in the day — which literally my partner/manager Shakim [Compare] did — ‘Do you think Latifah can be an A-list actor?’ They said ‘No.’ And it was strictly based upon the fact that I’m Black, that I’m not skinny, that I’m not white, I’m not thin, I don’t have blue eyes. So, everything from that moment on was like, ‘Okay, we have to create this ourselves if it’s going to happen.’ And that’s what we did.”

Latifah explained that every creative move she’s made sense was about allying with forward-thinking partners who understand that there is a demand for stories by and about people who, like her, aren’t the “antiquated vision of what a Hollywood actress is supposed to look like.”

One such alliance was Latifah’s “Queen Collection” make-up line with Procter & Gamble’s CoverGirl, which ultimately led to the Queen Col