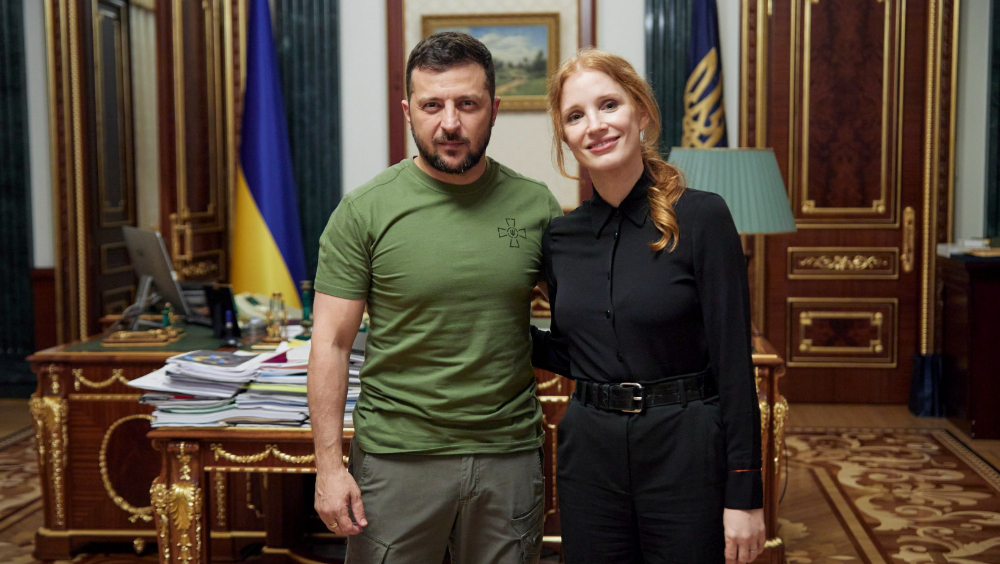 Oscar-winning Hollywood actor Jessica Chastain was in Kyiv, Ukraine, over the weekend. She visited children’s hospital Okhmatdyt on Sunday and later met with Ukrainian President Volodymyr Zelenskyy and head of the presidential administration Andriy Yermak.

Chastain, who won the best actress Oscar this year for her performance in “The Eyes of Tammy Faye,” is the latest celebrity to display support for Ukraine, where the Russian invasion of the country continues.

Zelenskyy posted pictures of the meeting on his Telegram account with the note: “American actress Jessica Chastain is in Ukraine today. For us, such visits of famous people are extremely valuable. Thanks to this, the world will hear, know and understand the truth about what is happening in our country even more. Thanks for the support!”

In his daily address to the people of Ukraine, Zelenskyy said: “Ukraine will do everything to make our struggle and Ukrainian needs known in all countries of the world and in all audiences — even those who usually do not follow political life. In particular, American actress Jessica Chastain arrived in Kyiv today. She visited Okhmatdyt and saw with her own eyes the consequences of the Russian occupation in Irpin, Kyiv region.”

“Her story about our war will definitely be heard. We are preparing an important humanitarian event,” Zelenskyy added. “And I am grateful to all friends of Ukraine abroad and to everyone who helps expand our ties in the world. We are doing everything to win, everything to protect our country.”

Most of the major networks, including public broadcast giant NHK, and the private sector NTV, TBS, Fuji and TV Asahi channels, have ditched their schedules to cover the shooting. The NTV and TBS CS (communications satellite) news channels are also airing non-stop coverage. TV Tokyo, a terrestrial channel that is a frequent counter-programmer, is sticking to its regular lineup. Print media, including the Yomiuri Shimbun, have also rushed out special editions.

Abe was speaking on the street at a campaign stop for a Liberal Democratic Party candidate in Nara Prefecture at around 11:30 am local time. Japan is holding a nationwide election for the upper house of parliament.

Phone images from spectators present at the event are appearing on national television, including NHK. But broadcasters are not showing the actual moment of the shooting, when Abe was felled by what appeared to have been two shots. That may be due to the jerky reaction of the person using a smartphone as a camera when the bullets hit.

Footage from immediately before and after Abe was felled by the shots is being aired, however, indicating his collapse to the ground are not included.

Smoke from the gun can been seen in the ‘before’ footage and people gather around the fallen Abe can be viewed in the ‘after’ footage.

Other amateur footage appears to show the moment the gun was fired. But NHK’s broadcast cuts away before Abe falls to the ground.

Later, other cell phone images emerged of the shooter standing just three metres (approximately 10 feet) behind Abe as he spoke. Security at the event, largely provided by the local police force, rather than a specialist protective detail,  has quickly been criticized.

An NHK reporter on the scene captured security police subduing the apparent shooter, a 41-year-old man, Yamagami Tetsuya, and seizing his weapon, which appears to be a handmade gun.

The shooter is being questioned by police, but his motives remain unknown.

NHK has been the only channel to cover live footage of current Prime Minister Fumio Kishida’s press conference about the shooting.

NHK is also reporting the foreign reaction to the shooting, including reports on CNN and Reuters, as well as reaction of ruling LDP and opposition politicians.