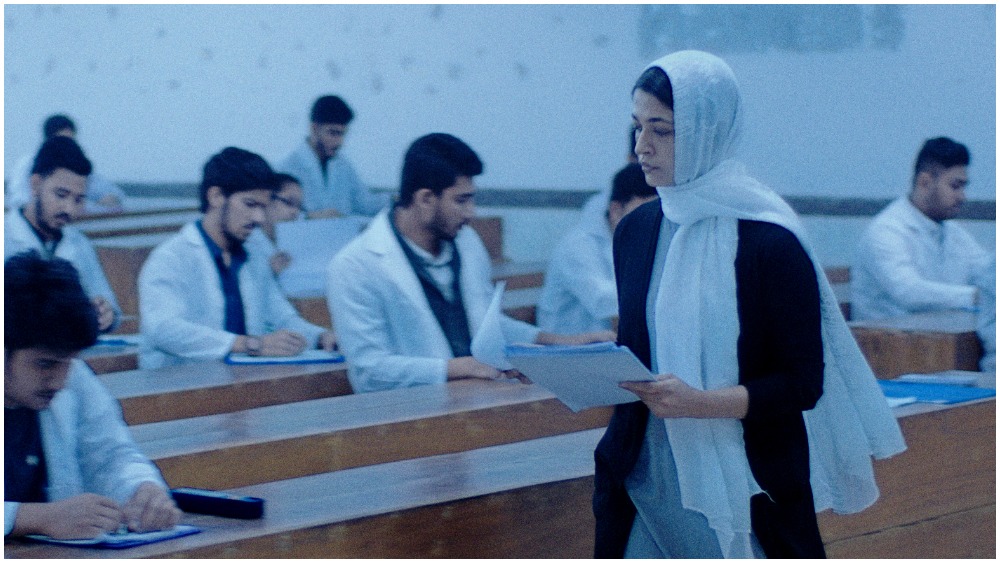 The film follows Rehana, an assistant professor at a medical college, who struggles to keep the harmony between work and family, as she has to play all the complex roles of a teacher, doctor, sister, daughter, and mother. One evening, she witnesses a student storming out of a professor’s office, crying. Deeply impacted by this event, Rehana’s life starts to spiral out of control. She gradually descends into obsession, seeking retribution, just as she receives a complaint from the school about her six-year-old daughter’s unusual behavior.

“Rehana” debuted at Cannes, where it was nominated for the Un Certain Regard Award award and has subsequently played at the Melbourne, Busan, London and Pingyao festivals. The cast includes Azmeri Haque Badhon, Afia Jahin Jaima and Kazi Sami Hassan. Badhon has a best actress nomination at the Asia Pacific Screen awards.

Saad’s debut feature “Live from Dhaka” won best director and best actor at the Singapore International Film Festival in 2016, and went on to screen at other festivals including Rotterdam and Locarno.

Chua is a festival veteran whose producing credits include 2016 Cannes title “A Yellow Bird.”

The film has secured domestic distribution in Bangladesh and will release Nov. 2 in cinemas.

Set in rural Tamil Nadu, South India, the film follows a young boy who is dragged between villages by his abusive alcoholic father to bring his mother back home.

The film’s Variety review lauds it for having “all the focus and penetration of a perfectly constructed short story” and for its “larger, unforced statement about toxic patriarchy, limited resources, and the silent, enduring place of women as enablers of life.”

The film had its world premiere at Rotterdam earlier this year, where it won the festival’s top honor, the Tiger Award. It has also won awards at Yerevan and Transilvania and is nominated at the Asia Pacific Screen Awards. It is produced by Rowdy Pictures, an outfit run by popular South Indian actor Nayanthara and filmmaker Vignesh Shivan.

“The Stranger,” a first feature by writer-director Ameer Fakher Eldin about a doctor going through an existential crisis in the occupied Golan Heights, has been selected as Palestine’s official entry in the International Feature Film category at the upcoming Academy Awards.

Italy’s Intramovies has announced that it is taking world rights to the picture shot on location which recently launched from the Venice Film Festival’s independently run Venice Days section where it won the Edipo Re Award.

“The Stranger” stars Palestine’s Ashraf Barhoum (“The Kingdom,” “Paradise Now”) playing an unlicensed doctor whose life takes an unlucky turn when he rescues a wounded man upon his return from the war in Syria.

“The Stranger” is intended to be the first instalment of a trilogy directed by Ameer Fakher Eldin. His second feature with the provisional title “Nothing of Nothing Remains” is being developed by Red Balloon. Intramovies is discussing the possibility of a continued collaboration with the director’s team.

Hong Kong has selected “Zero to Hero,” a sports and family drama film as its contender in the Academy Awards’ best international feature category. The decision was announced Friday by the territory’s Motion Picture Industry Association.

Directed by Jimmy Wan Chi-man, the film is a biopic of the Paralympic athlete So Wa-wai who was born with cerebral palsy but went on to win 12 medals between 1996 and 2012, and break world records.

With production handled by One Cool Films, the film premiered at the Udine festival of Asian films and was released commercially in Hong Kong on August 12. Leading Hong Kong actor Sandra Ng, who plays the pivotal role of So’s mother, is credited as one of the film’s producers.

Asghar Farhadi’s “A Hero” has been selected by Iran to represent the country at the upcoming Academy Awards in the Best International Feature Film category.

The widely expected decision by the Iranian Film Board was announced on Thursday by the Farabi Cinema Foundation, which is the country’s international film body.

Farhadi has previously won two international Oscars for, respectively, “A Separation” in 2011 and “The Salesman” in 2016,  the former of which was also nominated for original screenplay.

“A Hero,” which launched positively in July from the Cannes Film Festival where it tied for the Grand Prix, the fest’s runner-up prize, is the story of Rahim (Amir Jadidi), who is in prison for a debt that he was unable to pay. During a two-day leave, an act of kindness provides him with an opportunity to convince his creditor to withdraw the complaint so he can go free, but not everything goes as planned.

It will be released by Amazon in the U.S.

Tatiana Huezo’s “Prayers for the Stolen” (“Noche de Fuego”) has been selected by Mexico’s Oscar committee to represent the country in the international feature film race.

The drama, which follows three girls as they come of age in a village rampant with human trafficking and the drug trade, competed in Cannes’ Un Certain Regard section and was awarded a special mention. “Prayers for the Stolen” also took home the best Latin American film award at San Sebastian. The film stars Mayra Batalla, Norma Pablo and Olivia Lagunas and was produced by Nicolás Célis and Jim Stark. “Prayers for the Stolen” has been acquired by Netflix.

Julia Ducournau’s Palme d’Or Winning “Titane” has been selected by France’s Oscar committee to represent the country in the international feature film race.

Valdimar Jóhannsson’s “Lamb” has been selected by Iceland’s Oscar committee to represent the country in the international feature film race.

The body horror film, which was recently released domestically by Neon across 562 screens, was chosen over Audrey Diwan’s “Happening,” winner of Venice’s Golden Lion, and Cedric Jimenez’s “The Stronghold.” “Lamb” is Jóhannsson’s debut feature film, and he co-wrote the screenplay with Icelandic poet Sjón. The film follows a childless couple in rural Iceland who make an alarming discovery one day in their sheep barn.

The decision was announced by Austrian Films and the Film and Music Austria industry association of the Austrian Economic Chambers, and confirmed by the film’s distributor MUBI.

Set in Germany after World War II, it tells the story of Hans, a man repeatedly sent to prison over multiple decades for his homosexuality. With each return, he grows ever-closer with his cellmate Viktor, a convicted murderer serving a life sentence, and what begins as revulsion blossoms over time to something far more tender.

“Great Freedoms” also opened Filmfest Hamburg in late September and had its U.K. premiere at the BFI London Film Festival in early October. It film will continue to screen at festivals globally this fall and winter, including Chicago International Film Festival, Montclair Film Festival, Philadelphia Film Festival, Denver Film Festival, and others, before releasing theatrically in the U.S. and U.K. on March 4, 2022.

Japan has selected Hamaguchi Ryusuke’s “Drive My Car” as its contender for the Academy Awards’ best international film category.

The selection was made by the Motion Picture Producers Association of Japan (Eiren). The news was first reported by Japan’s Sankei News organization and confirmed by the film’s local distributor Bitters End.

The three-hour film debuted in competition at the Cannes film festival in July, where it won a handful of prizes including the best screenplay award for Hamaguchi and Takamasa Oe’s adaptation of Murakami Haruki short story. It tells the tale of a widower director and his stoical female chauffeur as they drive to Hiroshima.

It is now a star attraction on the fall festival circuit, with appearances at Toronto, San Sebastian, New York, Busan, London, Sydney and the New Zealand festivals. International sales are handled by Germany’s The Match Factory. Japanese theatrical dis