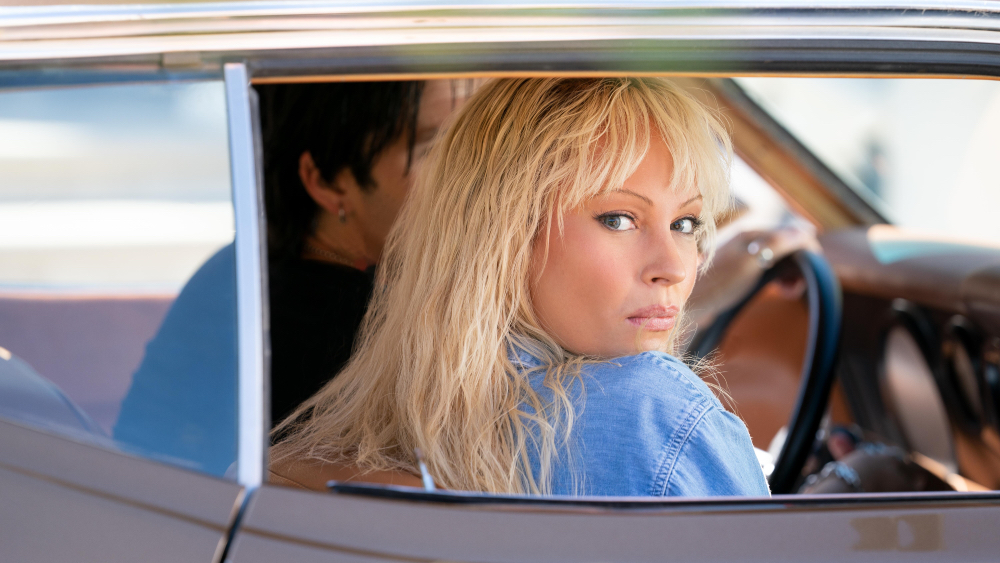 While Hulu’s “Pam & Tommy” chronicled the events behind Pamela Anderson and Tommy Lee’s infamous stolen sex tape, Anderson announced last week that she is preparing to tell her side of the story in a new Netflix documentary. Lily James, who plays Anderson in “Pam & Tommy,” says she looks forward to watching it.

At the series finale premiere for “Pam & Tommy” at the Greek Theatre in Los Angeles Tuesday night, the Hulu series’ cast and creatives stressed the importance of spotlighting Pamela Anderson’s story in today’s world.

“I think these violations of privacy happen way too often — and the way that the media responds and us, as a society, respond is often so awful, particularly toward women,” James told Variety on the red carpet. “There are these huge double standards, women are torn down and reduced… So I think we really need to look at that.”

Hulu’s eight-episode series follows the release of Anderson’s sex tape with her then-husband Lee (Sebastian Stan), including what motivated carpenter Rand Gauthier (Seth Rogen) to steal it, leading the video to explode nationwide.

“The more things change, the more things stay the same… It’s actually more intense now because there’s less privacy,” said co-showrunner D.V. DeVincentis. “Even though [the show is] from the past, it’s also a cautionary tale about the present and the future.”

Added director Gwyneth Horder-Payton: “It was the birth of the internet and the dark underside of it, which was really the exploitation of women… To hear the real story was fascinating and horrible.”

James noted that she’s “so excited” that the real Anderson will share her own story in the recently announced documentary she is developing for Netflix.

Anderson shared the news about her doc on social media on March 2 — about one week before the “Pam & Tommy” finale — with a handwritten note on the Netflix letterhead, reading, “My life / A thousand imperfections / A million misperceptions / Wicked, wild and lost / Nothing to live up to / I can only surprise you / Not a victim, but a survivor / And alive to tell the real story.”

Anderson and Lee’s sons, Brandon Thomas Lee and Dylan Jagger Lee, reposted the note. Brandon Thomas, who is also a producer on the project, highlighted the words “The real story.”

Anderson and Lee were not involved in the production of “Pam & Tommy,” so the series producers drew from other sources, notably a 2014 Rolling Stone article by Amanda Chicago Lewis.

“Pam & Tommy” co-showrunner Robert Siegel told Variety in January that, after James and the producers reached out to Anderson, the “Baywatch” star had “chosen not to engage… so we’ve respected her desire not to be involved.”

Both Siegel and DeVincentis also shared that they would be looking forward to seeing Anderson’s documentary — as well as the actor’s upcoming Broadway debut in “Chicago” — on Tuesday night.

“She really is a heroic person to us, and we entered this process feeling that way,” DeVincentis said. “Anything that she does, we can’t wait to watch.”

When asked about Anderson’s documentary at last week’s “Fresh” premiere, Stan told Variety, “I think it’s great… I’m feeling grateful and hopeful that the show inspired further conversation and another deeper look that it deserves, so I look forward to seeing it.”

“Pam & Tommy’s” production designer Ethan Tobman added that the production team focused on “getting this [story] right, and treating these people with dimensionality and with empathy. To do that, we didn’t want to resort to making them feel like cartoons… I hope if [Anderson] watches what we’ve done, she feels that we treated her fairly — with humanity and with respect. That was ultimately the goal. But I’m very, very happy to hear she’s able to tell her story.”