Giant Marilyn Monroe Statue in Palm Springs Draws Criticism: ‘Have We Learned Nothing?’ 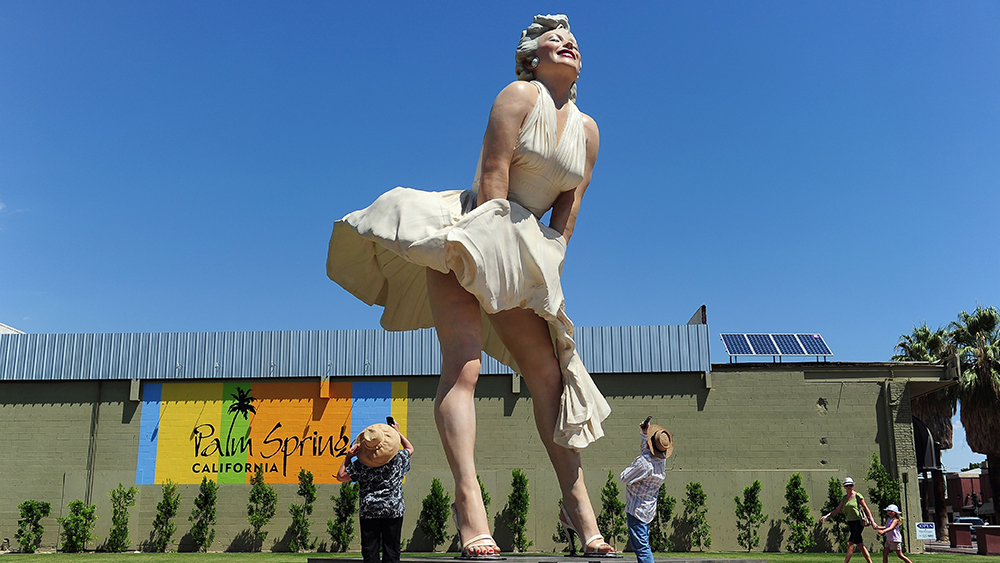 Marilyn Monroe would have turned 95 on June 1.

What would she think of her 26-foot-tall image greeting visitors to the Palm Springs Art Museum with her skirt permanently blown up by a sidewalk air vent, exposing her underwear in an undeniably iconic yet rather suggestive pose?

A number of residents in Palm Springs think she wouldn’t like it at all. But some business owners say the kitschy pop culture figure will help draw tourists, and the debate has divided the town.

The statue had been scheduled to be installed in front of the museum by the end of summer, but a lawsuit brought by residents objecting to the placement blocked the installation, and is winding its way through the court system, with another hearing set for July 20.

Detractors feel that a giant fiberglass statue of her in the famous “The Seven Year Itch” billowing-skirt pose is not the right symbol at the right time — at least not in that prominent location.

“It’s a battle for the identity of Palm Springs,” says Liz Armstrong, a former director of the museum. “How does it represent this city? This placement of her gigantic panty-clad rear end being the first thing you see when you come out of the museum, is so disrespectful, it’s such a slap in the face.”

Frequent visitors to the desert resort will remember when the statue served as a backdrop for tourists’ snapshots from 2012-2014 at the central crossroads of Palm Canyon Drive and Tahquitz-McCallum Way. The Seward Johnson-designed statue traveled on to other locations, but now a booster group backed by local hotel owners, which bought the statue for $1 million, wants to re-install the three-story-tall star smack in front of the museum for at least three years.

Putting the statue in front of the museum would conflict with the 1976 design by architect E. Stuart Williams and obscure the sightlines envisioned by the downtown renovation plan when it was approved, say those who object, like fashion designer Trina Turk. Turk started the Committee to Relocate Marilyn and raised money for a lawsuit against the city, which she says switched the statue’s location from a less obtrusive park nearby, to the front of the museum, without residents’ approval.

What started as an aesthetic objection from the community’s architecturally minded preservationists has now also raised questions around whether the statue represents a symbol of sexism. A petition called #MeTooMarilyn has garnered nearly 50,000 signatures objecting to the placement.

“Everybody knew the Marilyn statue was coming back, but when I found out the city council had made this abrupt switch of location, we thought, ‘you’re kidding,’” says Turk, a member of the Palm Springs Modern Committee who owns a boutique and historic house in the city.

“Part of what was decided was that there would be a view corridor, which is what Museum Way is, a new road to integrate the art museum into downtown,” Turk explains. “We’re really contesting the fact that the city completely ignored the downtown plan.”

P.S. Resorts and the attorney for the city of Palm Springs did not reply to request for comment.

Turk says there is no proof Monroe was discovered at the Palm Springs Racquet Club or even that she owned a house in the city as some have claimed, making the star an unlikely choice for a mascot. “I admire Marilyn Monroe as an artist and a pop culture icon, but I don’t think the statue is the best representation of who she is,” Turk says.

Armstrong, now an independent curator, feels strongly that the emphasis on the sexualized image of the star does not send the right message at a time when monuments everywhere are being reassessed. “We’ve had a big cultural shift, It’s just an old bygone stereotype, it’s not fair to her.”

The recent attention on the meaning of public monuments has made Armstrong rethink the statue’s appropriateness, she says. “Have we learned nothing? When you erect something 26’ tall, you’d better be sure about what it represents. This is a reminder of systemic sexism.”

Though many local art and architecture lovers don’t think the statue is a good ambassador for the city, they’re resigned to the idea that some hotel and store owners insist on keeping it in the city as a draw for visitors — as long as it’s not in front of the museum.

“It’s a lot different in the park because you don’t have her rear end in someone’s face, maybe it’s a little kitschy and fun. It’s about the nostalgia of Hollywood, but more from a male point of view,” Armstrong says.

“It’s a monumental throwback in a city known for art, architecture and a progressive culture,” Armstrong contends.