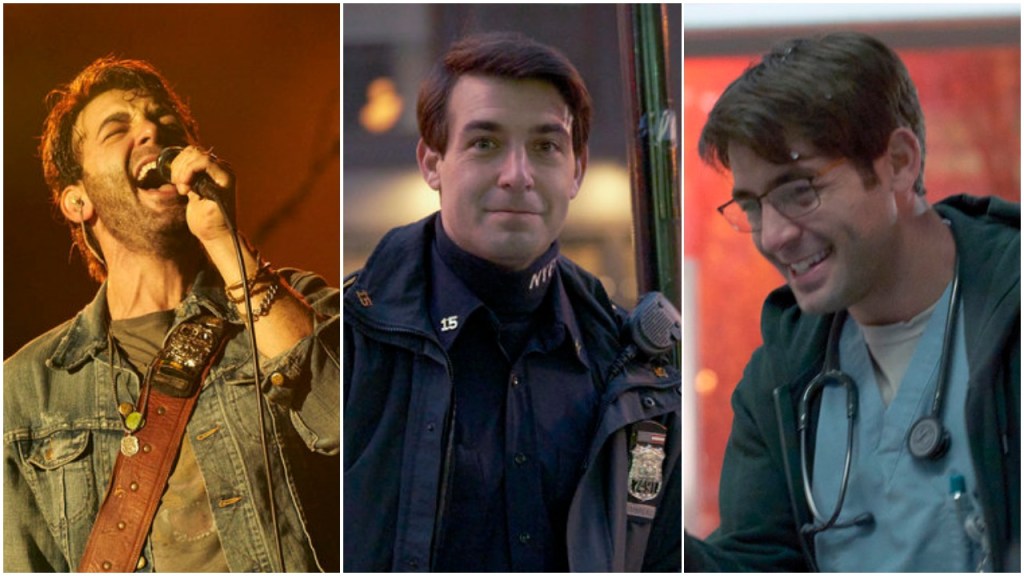 SPOILER ALERT: Do not read if you have not watched the series premiere of “Ordinary Joe.”

“Ordinary Joe,” NBC’s latest tearjerker drama, starts simply enough with the eponymous young man (played by James Wolk) graduating from college. He is at a time in his life where the world is both widely open to him, but also demanding that he make important decisions about who he will be and what he will do — and because of that, the narrative of the show splits into three distinct timelines.

In one, Joe goes to his “friend with benefits” Jenny’s (Elizabeth Lail) graduation party and they end up getting married and having a son, Chris (John Gluck); in that life he becomes a nurse. In another, he goes home with his family after the ceremony and ends up following in his father’s and uncle’s footsteps, becoming a cop, and staying single and living at home for the next decade. And in the third, he asks out Amy (Natalie Martinez), a woman he just met, and they go on to be together for 10 years, trying to have a baby while he becomes a famous musician.

“Something interesting that’s starting to happen just by virtue of doing the show a number of times — we’ve already shot six episodes — is the clothing really helps,” Wolk tells Variety of rooting himself in each distinct version of Joe.

“Nurse Joe is wearing stuff that I would call just a guy who cares about being a dad more than fashion. He’s not thinking about what brands he can buy to look cool; he’s thinking about what’s practical, what’s comfortable because he wants to take his kid to the park. And the same thing with hair and makeup; I don’t even know if I can call it a hairdo — it’s just the way his hair falls. Whereas someone like [Musician] Joe, he wants to make a statement with his jewelry and his clothing. So all of that makes me feel like I’m in his skin when I put it on.”

In all three of these timelines, Joe’s 10-year college reunion proves a pivotal second crossroad in the premiere episode. Nurse Joe uses it as an opportunity to have a date night with his wife who has served him with divorce papers. Cop Joe wasn’t planning on attending, but crosses paths with Amy again and makes a pact with her that they will go, where he also bumps into Jenny, who has their son with him — only he doesn’t yet know Chris is his son. Musician Joe performs a new song he wrote for his former classmates before reconnecting with Jenny and learning that she had been pregnant with their child, but gave him up for adoption, making him vow to find his son.

“The thing I have to keep reminding myself of is the given circumstances. The challenge isn’t feeling like a different version of Joe, it’s remembering what’s happening throughout the different versions,” Wolk says. “Just keeping up with one character throughout a TV show and all of the twists and turns it takes, that’s one muscle you develop as an actor. But all of a sudden, keeping up with three different worlds and three different timelines, that’s a constant, ‘What happened the last time we saw each other? What were we talking about, how did we leave each other?’ I constantly have to remind myself of that so I don’t slip into this comfortable feeling of, ‘I know this relationship.’ We’re playing these relationships in different worlds and we want to make those relationships different.”

The way Joe’s life has played out in each timeline is unique, as are the circumstances that inform his behavior in the present-day portion of the storyline. Getting a chance to perform in a stadium helped Wolk craft the level of confidence and “swagger” Musician Joe carries, for example. However, there is a common backstory for all three versions of Joe that shapes who he is. Most importantly, losing his dad on Sept. 11 is a big piece of the character, who was only a teenager at the time.

“Joe harbors a guilt for his dad passing away and being in town when 9/11 happened. Not rightfully so, but he feels that guilt, and that is a baseline for all three Joes. And we dive into that story; the audience will find out a lot more about Joe and his dad and we will flash back to see them,” Wolk shares.

Additionally, Joe’s relationship with Jenny’s father throughout their college years had a heavy hand in how he treated her, Wolk says.

“There were certain boundaries around Jenny that Joe grew to know,” he explains. “When you see them graduating, she has big plans for her future, and Joe feels like he can’t live up to that — ‘I’m on the other side of the tracks.’ So his choice to not go to Jenny’s party is because he almost feels a little hopeless: ‘This is my friend, I don’t want to do this anymore because it’s going to be awkward because she’s going to end up with someone else anyway. I’m not the kind of guy that’s good enough for her.’”

Even in the timeline where he and Jenny do end up married, the tension between him and her father is in the back of Wolk’s mind.

In order to portray each version of Joe as honestly as he could, he created his own timeline of what happened to Joe over the 10 years between graduation and where the show finds him now. For Nurse Joe, that included things like, “When did things get tough, what were those conversations like, how many months have they tried before she asked to be separated, what was the blowout fight they got in that finally made her say enough is enough?” he says. For Musician Joe, he thought a lot about, “How many times have we tried and lost a baby, how many times have we gone down this road, and what were those conversations like?”

Of the latter, Wolk says, “We came to find out that Amy really supported Joe’s dream and was there for him, and I look at her as a woman of strength who I look to for strength.”

The show will dive into some of this backstory on screen as well. Although there are three present-day timelines, Wolk says the first season continues to flash back to the college years, creating a fourth one.

Thus far, Wolk says the most complicated aspect of the show is Musician Joe. Wolk works with on-set consultants for both Cop Joe and Nurse Joe to ensure they are “bringing integrity and honesty to those professions,” but Musician Joe demands more of his time off set, from working with a vocal coach a few hours a week to getting in a recording booth for hours at a time and then also singing live on the day of production.

Musician Joe is also the version Wolk admits to having to keep himself from judging in the early days. “That was the one that was most foreign to me,” Wolk explains. “I had to find my way into it to understand why he would act that way and do those things. If you judge the character then you’re looking at it from the outside and you’re not doing justice to the character.”