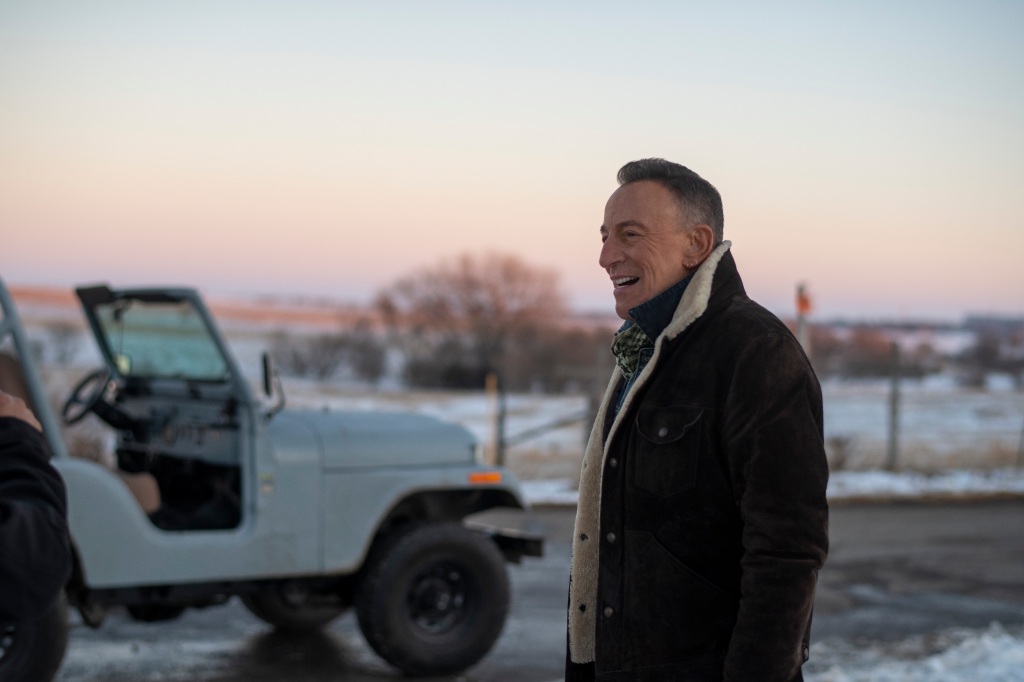 After driving “Thunder Road” for decades, Bruce Springsteen is taking a detour on Madison Avenue.

The musician known as “The Boss” will command two minutes of commercial time in Super Bowl LV Sunday night, all part of a mammoth Jeep ad meant to reflect a national mood of coming together after four years of politics and polarization. The spot does something else, too: It ends a decade-long quest by one of the industry’s most colorful marketing executives to convince the iconic artist behind  stirring songs like “Born in the U.S.A.,” “Growing Up” and “The Rising” to do something he has never done before — align himself with an advertiser.

The commercial is designed to spur viewers to mend the various rifts that have erupted in the nation in recent years.  “We just have to remember the very soil we stand on is common ground,” Springsteen says as he holds forth from a small chapel in Lebanon, Kansas, with his own 1980 Jeep CJ-5 in the picture. He adds: “Our light has always found its way through the darkness. And there’s hope up on the road ahead.” The ad ends with the tagline, “To The ReUnited States of America.” Springsteen and producer Ron Aniello scored the ad with original music that ends with a lilting violin.

The ad is inspiring, to be sure, but also certain to raise eyebrows. Springsteen is not known for taking part in commercials. Indeed, the only example one Springsteen expert could find is of the artist jokingly reading a promotion for wine while visiting Philadelphia radio station WMMR in 1974 before his landmark album, “Born To Run,” became a cultural phenomenon. “Since that moment, I don’t think he’s ever endorsed a commercial or a product,” says Louis Masur, a professor of American studies and history at New Jersey’s Rutgers University who teaches a course called “Springsteen’s American Vision.”

Meanwhile, executives at Stellantis, the large automaker behind Jeep, had no idea the commercial would even be made until a few weeks ago. Springsteen only agreed to do it after the start of 2021. It was filmed on location just last Sunday.

“This is the triumph of perseverance and stubbornness,” says Olivier Francois, chief marketing officer of Stellantis, in an interview. The executive says he has spent the past ten years suggesting potential ideas and concepts to Springsteen’s longtime manager, Jon Landau. “Bruce is not for sale. He’s not even for rent,” says Francois. “He certainly doesn’t need anything you think you have.”

Stellantis, however, may need Springsteen. Fewer automobile advertisers are showing up on Super Bowl Sunday this year, owing in part to the economic fallout of the coronavirus pandemic. One rival, General Motors, will come to Game Day fully loaded. The auto giant is running two commercials meant to burnish its new move into the production of electric vehicles and Will Ferrell, Kenan Thompson and Awkwafina are among those along for the ride.

Created by a merger between Fiat Chrysler Automobiles and Groupe PSA last month, Stellantis had originally purchased two 60-second slots for other commercials already created for the Super Bowl. So when Francois realized he had a short Springsteen film ready to go, he rushed to CBS, the network showing the game on Sunday, and asked if he could combine his purchases to show a single, long-form ad. Because arranging a Super Bowl ad roster can often be as complex as a top coach’s book of defensive maneuvers, Jeep considered a 90-second cut for its Springsteen ad. But Francois says he felt some other commercial showing up after Springsteen’s stirring oratory would ruin the ad’s effect on viewers, and so he pressed to have the new Jeep ad take up an entire break.

Springsteen has long sung of a “’69 Chevy with a 396,” of a Cadillac that is “long and dark, shiny and black,” and of the “crushed velvet seats” of a “pink Cadillac.” But Francois was convinced the songwriter embodied many of the attributes that make Jeep appealing to car buyers. “It is obvious to anyone. He is exactly like Jeep — iconic, American, rugged and authentic,” says Francois. As he cast about to try and put different concepts into action, music producer and executive Jimmy Iovine helped him strike a relationship with Landau in late 2011.

“I thought he could be a good candidate, and that is when I met Jon, who very nicely, kindly, explained to me that this will never happen,” recalls Francois. “He starts telling me all these stories, how [former Chrysler CEO] Lee Iacocca reached out really offering him a ton of money to just get a song in a commercial, with Bruce always turning down every offer.”

Even so, Francois and Landau kept in contact. “Along the way, from time to time, not presuming too much, I would try to pitch some ideas. They would turn me down — always. Obviously, I didn’t want to abuse my relationship, “says Francois. “But I’m a car salesman, so I can’t help but try to sell my ideas. It never worked. It never worked.”

Until early in 2021. David DeMuth, the CEO of Doner, one of the company’s ad agencies, reached out to Francois with something he thought warranted attention.

Based in Southfield, Michigan — close to Detroit, America’s auto-manufacturing center — Doner has a history of helping to sell cars. Its executives devised the famous “Zoom Zoom” slogan that was a big hit for Mazda for nearly 15 years. Now DeMuth had a script for a commercial called “The Middle.” The ad describes the tiny U.S. Center Chapel in Lebanon, purportedly in the exact geographic center of the contiguous 48 United States.  The ad copy described a church that “never closes. All are welcome to come meet here — in the middle. It’s no secret: the middle has been a hard place to get to lately, between red and blue, between servant and citizen, between our freedom and our fear.” Francois stored it in a folder in his computer.

When he and Landau exchanged New Year’s pleasantries via text, Francois decided to send the manager the script. “Don’t take it as a push,” he recalls telling Landau. “I know he’s not going to do it.  But who knows?”

Landau liked it. But he downplayed any chance of something taking place. “Curb your enthusiasm,” Francois says he was told, “Calm down. We all know the outcome.” He told Francois he would suggest Springsteen consider the idea, even as he warned: “It’s beyond a long shot.”

Turns out it wasn’t.

Springsteen thought the concept would be very spiritual, says Francois. “He looked at this as a prayer,” and that interpretation played a role in whether the musician would contribute one of his actual songs to the piece, an idea Francois says was indeed under consideration. “If this is a prayer, he didn’t want the music to distract from that.” Springsteen opted to contribute a score instead, with Francois requesting the music finish on an upbeat note after the artist’s voice over finished.

“Our goal was to do something surprising, relevant, immediate and artful,” says Landau in a prepared statement. “I believe that’s just what Bruce has done with ‘The Middle.’”

Some generations of music lovers have long insisted that rock and pop songs remain free from commercial entanglements. Yet in recent years, the stigma of advertising alliances has faded. Bob Dylan has allowed his songs to be included in commercials from Apple, Chobani and Victoria’s Secret. Billy Joel, who once kept his music away from product endorsements, has made his songs available for Gap and Merrill Lynch. Even Neil Young, who once vowed that he “Ain’t singing for Pepsi / Ain’t singing for Coke” in a 1988 tune, endorsed Amazon’s high-quality music streaming in 2019.

“Those boundaries have become much more permeable. Songs are used in commercials all the time,” says Masur, the Rutgers professor.

Springsteen’s decision comes as many artists and producers of his generation have begun to sell complete or partial oversight of their rights to outside entities. Dylan, Stevie Nicks and Lindsay Buckingham are among the musicians who have done so. And it takes place as one of the artist’s favorite activities — touring — has been scuttled by pandemic conditions. Springsteen released his latest album, “Letter To You,” in October.

His appearance on Super Bowl Sunday is still guaranteed to give some viewers pause, a reaction that any advertiser desperately craves.  For a decade, Francois has struck alliances with iconic figures and devised Super Bowl commercials that shock and surprise the game’s huge audience. In 2011, he used the Eminem song “Born of Fire” to get viewers thinking about the nation’s rebound from a massive economic recession. The Chrysler automobiles shown in the resulting two-minute ad were “Imported From Detroit.” In 2012, Chrysler worked with actor Clint Eastwood in a spot that appeared just before the second half of Super Bowl XLVI, and urged consumers to keep working to revive the nation. “This country can’t be knocked out with one punch,” Eastwood says in the ad. “Yeah, it’s halftime, America. And, our second half is about to begin.”

Last year, Jeep ran a Super Bowl spot featuring Bill Murray in a reprisal of his role from the 1993 comedy “Groundhog Day” showing how the vehicle could shake up a life of repetition and ennui. In 2014, none other than Dylan appeared in a Chrysler ad during Super Bowl XLVIII, telling people about the value of American-made automobiles. “Let Germany brew your beer,” Dylan says in the spot. “Let Switzerland make your watch. Let Asia assemble your phone. We will build your car.”

Like any Super Bowl ad, the Jeep commercial has the potential to inadvertently spur a tough reaction. There is no controlling how viewers interpret the ads or speak about them on social media. Springsteen has long been active in social causes, and there’s always the chance a consumer with conservative politics might not appreciate his appearance or the message he delivers.

Springsteen “was 100% sincere, and honest and authentic. This is an attempt to contribute, to heal. This is not an attempt to pick a side,” says Francois. Springsteen “felt it was time for him to be this guy in the middle of America, talking to America from this little chapel in the epicenter of America, and stand for the middle and nothing else. I hope, really hope, that this will be understood,” he says, adding: “We acted in good faith, and as good people, and trying to do this thing for the greater good. Now, it will be in the public domain and we will see what happens, but I have no regrets.”

Springsteen, isn’t a celebrity to be hired and told what to do or how to act. “A celebrity you pay, and a legend you have to respect,” Francois says. “They are not going to put in their mouth one single word they are not deepl