Last year’s growth was almost a match for 2020, which saw a year-on-year revenue increase of 28%.

The figures were revealed in broadcasting regulator Ofcom’s annual Media Nations report, which reviews trends in the media sector and looks at how U.K. audiences are being served.

According to the report, TV broadcasters found that between 2020 and 2021 average viewing – across all devices, including live TV and on-demand – was down by 9% while SVoD viewing was down by 6%.

2020 and 2021 were when the U.K. found itself in repeated lockdowns due to the COVID-19 pandemic. As restrictions began to ease, the average amount of time people spent watching content across all TV/video devices began to drop.

With the U.K. almost entirely out of lockdown restrictions, that spells worrying news for both broadcasters and streamers, particularly with record spending on film and high-end TV and a cost of living crisis hitting the country.

That can already be seen in SVOD subscriber numbers across the U.K., which have declined from 68% in the first quarter of 2022 to 67% in the second quarter. That equates to 350,000 households who no longer subscribe to any streaming service.

However, Ofcom reported that 73% of those who had cancelled their subscriptions thought they would re-subscribe in future.

There is increasingly a gap between those committed to streaming and those who can live without it. A fifth of U.K. homes (5.2 million) subscribe to the three most popular streaming platforms – Netflix, Amazon Prime Video and Disney+ – at a cost of around £300 ($363) a year.

But the report noted that the number of households who have yet to try a streaming service is becoming “harder to convert,” which has also accounted for a slowdown in subscriber growth.

That has made the landscape all the more difficult for the newer market players, including Apple TV+, Discovery+ and Paramount+ all of whom, the report said, “face strong competition to be one of several services used in households that already take one or more of Netflix, Amazon Prime Video or Disney+.”

Unsurprisingly, live sports topped the list of most-watched broadcast TV programs in 2021, with the final of the Euro 2020 soccer championship emerging the winner with a combined audience of 22 million. That was followed by the EUFA European Championship Final at number 2.

However, rounding out the top 5 were the “Line of Duty” series finale on BBC One at number three, Oprah’s interview with Prince Harry and Meghan Markle at number four and the Prime Minister’s COVID-19 statement in January 2021 at number 5.

The most-watched event in the first six months of 2022 has been coverage of the Queen’s Platinum Jubilee celebrations on BBC One. The Eurovision Song Contest placed number 6 with an audience of 9.4 million.

The report also noted the most-watched U.K. shows on the streamers in 2022 so far. For Netflix that included “After Life,” “Bridgerton” (pictured above) and “The Tinder Swindler,” as well as “Reacher” on Amazon Prime Video and “Book of Boba Fett” and “Moon Knight” on Disney+.

Half of the top most-watched Netflix titles in the first quarter of 2022 were produced in the U.K., according to the report.

“The streaming revolution is stretching the TV generation gap, creating a stark divide in the viewing habits of younger and older people,” said Ian Macrae, Ofcom’s director of market intelligence. “Traditional broadcasters face tough competition from online streaming platforms, which they’re partly meeting through the popularity of their own on-demand player apps, while broadcast television is still the place to go for big events that bring the nation together such as the Euro final or the jubilee celebrations.” 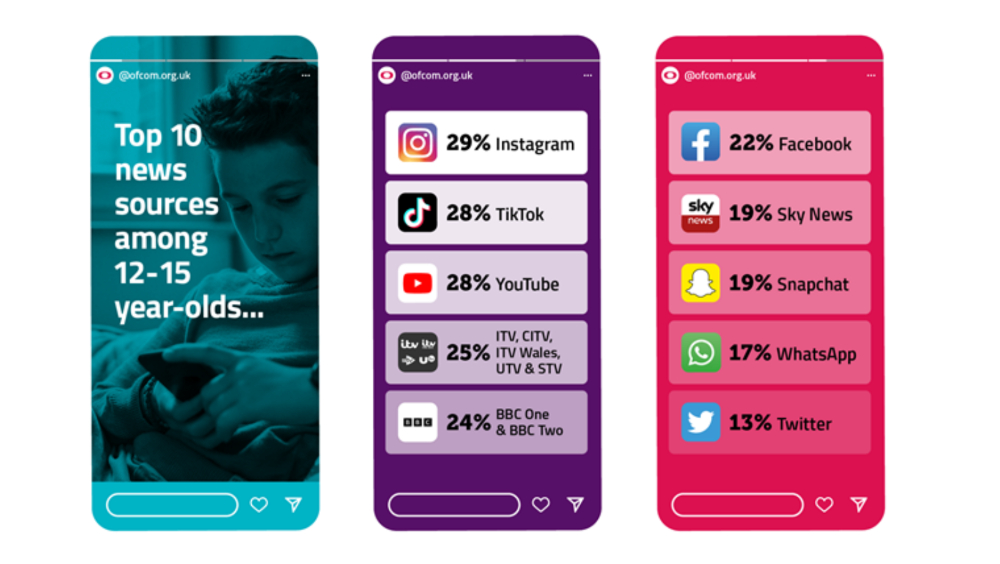 Instagram, TikTok and YouTube are now the preferred mode of news consumption for British teenagers, a report by U.K. media regulator Ofcom has found.

Ofcom’s News Consumption in the U.K. 2021/22 report reveals that for the first time, Instagram is the most popular news source among teenagers, used by 29%. TikTok and YouTube are close behind, used by 28% of teenagers to follow news.

BBC One and BBC Two — historically the most popular news sources among teens — have been knocked off top spot down to fifth place, below the ITV news cluster. Some 24% of teens 24% use these channe