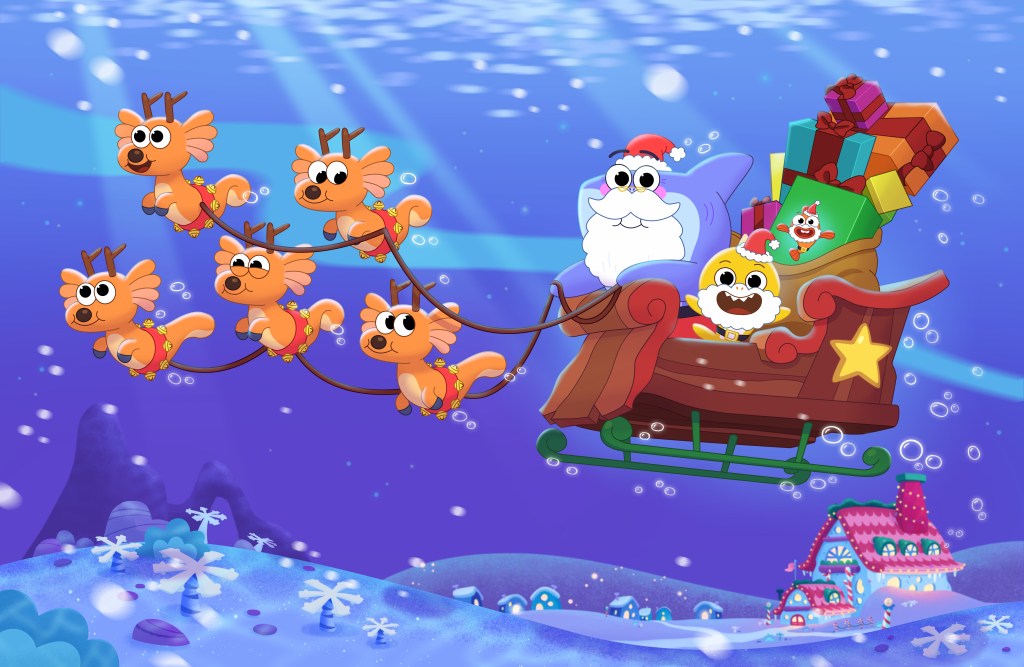 Nickelodeon set the cast for its new preschool series “Baby Shark’s Big Show!,” which will premiere with an original holiday special Dec. 11. The 2D animated series will feature Kimiko Glenn as the titular Baby, a sweet and fearless little shark; Luke Youngblood as William, a clever, adventurous pilot fish and Baby’s best friend; Natasha Rothwell as Mommy, who works for the mayor of their community Carnivore Core; Eric Edelstein as Daddy, a goofy and loud dentist who flosses when he’s nervous; Debra Wilson as Grandma, a perpetual prankster, and Patrick Warburton as Grandpa, a charismatic shark who loves to tell tales about the glory days. Co-produced by Nickelodeon Animation Studio and SmartStudy, the series will follow Baby Shark and William as they set out on comedic adventures in Carnivore Core, making new friends and singing catchy original tunes along the way.

Food Network Kitchen announced a new Tastemade series “Just Ask the Baker” has launched on its app. “Just Ask the Baker” is a baking show that is hosted by Meghan Rienks and incorporates advice and commentary in response to questions sent in by viewers. Each 30-minute episode will delve into a wide range of topics from mastering a cake to navigating relationships. The first five episodes of the 10-episode original are available now, with the latter five becoming available in December. “Just Ask the Baker” is one of five shows that Tastemade is debuting on the Food Network Kitchen app, including “Sourced” featuring host Guy Turland eating his way around the world, “Cooking with Pride” with Ingrid Nelson discussing LGBTQIA+ issues, “Dish It Healthy” about clean eating and “Raw. Vegan. Not Gross.”

IMDb TV is developing “Hialeah: Dade F-ckin County,” a half-hour family comedy series co-created by writers Monique Alvarez and Jessica Lee Williamson. Produced by Amazon Studios, the series follows first-generation Cuban American ChiChi Rodriguez, who escapes from her failed marriage and ends up with her disapproving family in Hialeah, Fla. — a world away from lavish South Florida and the last place ChiChi wants to be. Regardless, she’s primed to reinvent herself and work with what she has. Alvarez and Williamson will serve as executive producers alongside Danielle Claman Gelber and Teri Weinberg. Clark Johnson is attached to direct and produce.

‘Avatar: The Last Airbender’: 8 Facts That May Surprise You

It’s been 15 years since “Avatar: The Last Airbender” first premiered on Nickelodeon in 2005, becoming a massive commercial success. Now that the animated series is available on Netflix (and the streamer’s no. 1 most popular show this week), fans old and new are able to experience the story of 12-year-old Aang, the Avatar and sole survivor of the Air Nomads, as he and his friends work to restore harmony between the Water, Fire, Earth and Air nations.

However, the popular series that fans know and love today didn’t turn out to be what the creators originally envisioned. It’s hard to imagine the show without Zuko, the vindictive fire nation prince fans hated to love, or the “cabbage man” who became a recurring fan favorite, but both characters were nearly erased in the writer’s room.

Here are eight surprising facts about the beloved series:

‘My Cabbages!’ ’is a line all-too-familiar with viewers of the show. Originally meant as comic relief, the “cabbage man” wasn’t supposed to stick around long, but the writers kept him as a running gag throughout the series.

Prince Zuko was initially just an extension of the Fire Lord’s persona, and never actually meant to be a main character. To give some more allure and storyline to the Fire Lord’s vindictive quest, they had to write in a character that would bolster the cat and mouse chase around the kingdoms that would eventually birth a maturing and relatable cast of characters. It also gave us someone that we honestly kept around to hate, but won our hearts over by revealing a complex persona behind a detestable facade.

Toph Was Originally Meant to be A Guy

To serve Toph’s tough and rugged exterior, the show’s producers suggested that she be given a more correlated physique. She, the most powerful earth-bender, was initially meant to be a “he” that was as strong physically as they were appearance wise. Shocker.

Zuko and Katara Were Almost a Thing

The relationship between these two was supposed to blossom into a full-blown romance. The writers of the show tossed around the idea of Zuko and Katara ending up together. Unfortunately, their romance was not meant to be.

Where would this series be without Sokka’s goofy humor to cut through the animosity? Originally meant to be yet another dry and sobering serious character, the character’s voice actor Jack DeSena decided to add his own flair to the character’s personality. It wound up being quite the success and ended up perfectly enveloping the nature of the show’s biting yet moving nature.

Azula Was Meant to Have an Arranged Marriage

Yup, Azula, spearheaded to be the most heinous of the fire nation’s armory, was supposed to get married. According to the show’s creators, during Book Three, Azula was actually meant to have an arranged marriage. Thankfully, the idea was later scrapped.

One of the co-creators of “The Last Airbender,” Michael DiMartino, actually worked on “Family Guys” for years, directing and writing a number of episodes, but left the Fox comedy show in 2002 to work on his passion project, “The Last Airbender.”

There isn’t a more likeable character in the series than Uncle Iroh, so it’s hard to imagine that the series finale ended with him stabbing his favorite nephew, prince Zuko, in the back. In Iroh’s original role in the series, the uncle was intended to betray Zuko, acting as a double agent that would have been a major plot twist in the animated series. Thankfully, the writers finished the series with the happy ending Uncle Iroh deserved.

Nickelodeon has announced Victoria Justice will host the “Kids Choice Awards” on Saturday, May 2 at 8 p.m. ET/PT.

The newly titled and virtually produced show, “Nickelodeon’s Kids Choice Awards 2020: Celebrate Together,” was originally set to air on March 22, but was rescheduled due to the coronavirus pandemic.

In addition, cast members of “The Avengers: Endgame” are set to make an appearance, and the show will feature a sneak peek of Nickelodeon’s new live action series “The Astronauts,” from Imagine Entertainment. The virtual event is set to include a segment from Jojo Siwa and a performance by recording artist and actor Asher Angel. There will also be an exclusive look at Nick’s Slime in Space Voyage.

NBA champion and global icon LeBron James will receive the 2020 Generation Change Award, honoring his commitment to creating real and lasting change through education. James’ Quibi series “I Promise” premiered this month, documenting the lives of the most at-risk students in his hometown of Akron, Ohio attending the I Promise school and their day-to-day struggles.

Nickelodeon will also support the mission of No Kid Hungry, a national campaign to end childhood hunger in America, and will present a $1 million donation in support of those affected by the COVID-19 pandemic.

The leading nominees for the award show include “Avengers: Endgame” with 11, followed by Taylor Swift with five and Lil Nas X, the “Frozen 2” film and the “Henry Danger” series with four nominations each.

Nickelodeon’s new competition series, “America’s Most Musical Family,” which was announced in February, has revealed its judges lineup and recording partner. Ciara, who serves as executive producer, will be joined by singer Debbie Gibson and YouTube star David Dobrik on the panel. Nick Lachey, of the group 98°, hosts the show.

The 12-episode series will feature 30 talented families competing for a recording contract with Republic Records, home to Post Malone, Taylor Swift and The Weeknd, among many other marquee acts, as well as a $250,000 cash prize.

Production starts in Los Angeles imminently with the show’s premiere slated for later this fall.

Said Rob Bagshaw, Nickelodeon’s executive vice president of unscripted content who oversees production for “America’s Most Musical Family”: “This competition for all ages is about celebrating exceptionally talented families. We’re in for a spectacular show.”