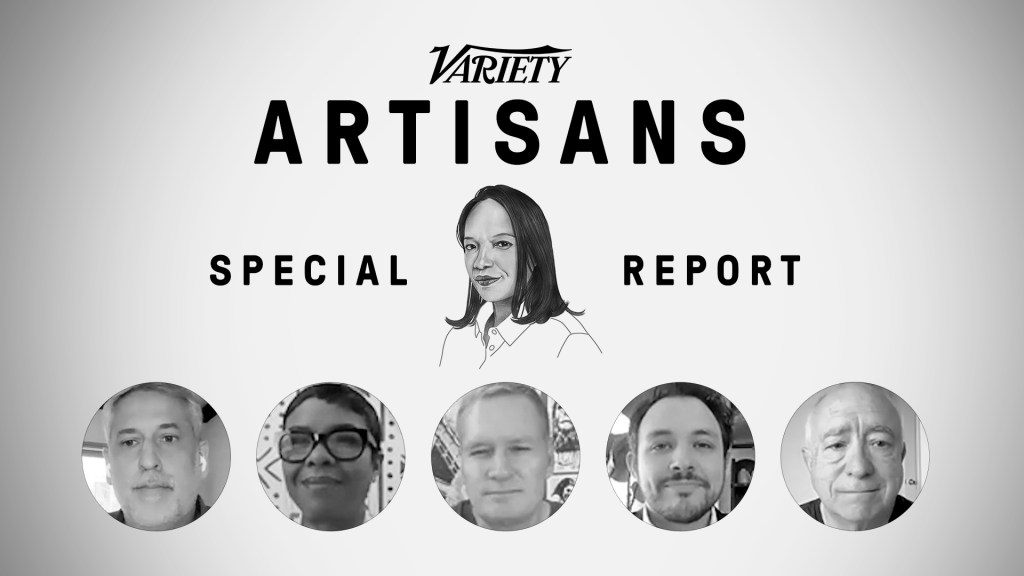 The hardest blow is the feeling that their work doesn’t matter as much as other filmmaking disciplines. That was the sentiment shared by a panel of veteran artisans who represent the craft categories that will no longer be presented live at this year’s Academy Awards ceremony on March 27.

“What offends me is that somebody in the Academy would claim to or imply that they know which crafts are more important and more deserving of respect than time than other crafts,” Randy Thom, a two-time Oscar winner for sound. Thom was among the participants in the “Variety Artisans: Special Report” virtual panel, moderated by Jazz Tangcay, Variety‘s Senior Artisans Editor, to examine the fallout from the Academy of Motion Picture Arts and Sciences’ decision to reformat the Oscars ceremony this year.

Like the other panelists, Thom is no stranger to the Academy Awards. He’s been nominated 15 times and won for 1983’s “The Right Stuff” and 2004’s “The Incredibles.” Thom was joined by editor Myron Kerstein, nominated this year for “Tick, Tick … Boom!”; hair department head Mia Neal, an Oscar winner for 2020’s “Ma Rainey’s Black Bottom”; editor and composer John Ottman, who won for editing for 2019’s “Bohemian Rhapsody’; and director , nominated for documentary short subject for “The Queen of Basketball.”

On Feb. 22, AMPAS confirmed that the awards for Documentary (Short Subject), Film Editing, Makeup and Hairstyling, Music (Original Score), Production Design, Short Film (Animated), Short Film (Live Action), and Sound will be presented at the Dolby Theater before the start of the live show and “folded seamlessly” into the telecast.

The quintet gathered March 2 for a lively discussion about why AMPAS’ telecast decision cut so deep. The much-decorated artisans also offer insights into how their craft specialities contribute to the collaborative work of filmmaking.

Watch the full conversation above.

Tell us about the feeling of being nominated for an Oscar. Tell us what it means for your professional career. Mia, you made history last year when you became the first Black woman to be nominated in the makeup and hair category.

Mia Neal: It was unbelievable for all of us. You have the build up to it, so you have a little bit of an expectation.

We all work so many hours. We do so much in our crafts, but when you get that recognition from other people in the same field, it is like joining a sorority or fraternity. It is like — you see me, and you like my work. It is a validation that is unlike any other. But there is something about other artisans in this field operating at that level, to acknowledge your work and feel like you deserve an Oscar for it, is next-level. It’s something that I have so much gratitude for and that feeling will never die down.

Myron Kerstein: It was an out-of-body experience. I’ve spent most of my career with imposter syndrome thinking that I wasn’t good enough. To be recognized by your peers in that way, you finally get a little validation, and it makes you want to be better, ironically enough. It makes you want to keep pushing.

Ben Proudfoot: It’s a full-body emotional experience. As a documentary filmmaker, it’s exciting to be recognized by your filmmaking peers. We’re an ally and advocate for the storyteller in the film, in this case, Lusia Harris. It’s a huge win for her, her family and her story to be recognized in this way. It was a win for closing the gap for her, her significance and her recognition.

Randy Thom: Oscar is such an icon that there’s nothing that can prepare you for getting the news that you’ve been nominated. The confusion and exaltation never go away, no matter how many times it happens.

I was in my late 20s, and I was nominated for three different films in the same year. It was just a matter of luck having worked on these three particular films over a previous couple of years, all of which got nominated in the sound category: ‘Never Cry Wolf,” “The Right Stuff” and “Return of the Jedi.” “The Right Stuff” won the Oscar. In my confusion, my main worry was that I was going to thank the wrong group of people.

The best thing about being nominated and certainly about winning is the level of respect you feel you’re getting from your peers, people who don’t do the same kind of work that you do, but who have a pretty good idea of the challenges involved in doing the work.

John Ottman: It’s great to win, but the nomination in a way is more of an honor because your craft nominated you. The nomination is an acknowledgment of your peers acknowledging your work.

There’s also the envelope opening, that walk up [to the stage] and you hear your name. Talk about that.

Ottman:  Almost a billion people are watching the Oscars, and I thought I’d be so scared, but when you get up there, you forget you’re on live TV. The venue is a lot smaller than you think, and you walk up there. Honest to God, I was not nervous at all, because I think you’re on adrenaline. My biggest fear was I didn’t memorize any speech.

Thom: It is an out-of-body experience. You’re getting up from your chair and you are numb, but you realize that there are people around you who are congratulating you. I don’t remember what my feet were doing. There are often lots of steps to climb. You think, ‘I don’t want to make a complete fool of myself by tripping on the steps.’ But it’s a dream-like experience that I wish everybody could have.

Neal: They said only one person can speak because of COVID [Neal was nominated with Jamika Wilson and Sergio-Lopez-Rivera. Originally, they said 90 seconds. I said, ‘Everyone, give me 30 seconds of what you’re going to say.’ But the night before, they cut the time down to 60 seconds. I was overwhelmed with needing to respect the Academy’s wishes around the time limit. Right before we went out, Sergio said to me, ‘Honor your ancestors.’ And because of the situation with Jamika and I being the first Black people ever nominated and to win in this category, it was also that this moment is not really about us. It was much bigger. There was a responsibility to honor that. I was very nervous, and a lot of the excitement of it all was taken away in the moment just because I was afraid of not honoring the people that were on the stage with me, not honoring the people that came before me, and it was this overwhelming pressure to acknowledge all of these things and to do it very respectfully.

Thom: One of the tragedies about this decision is that the Academy has traditionally been one of the most egalitarian of all the major awards-giving entities. It’s included more of the crafts and treated the crafts more on an equal basis than the others have. So t’s tragic that they’ve decided to backpedal on that and become less egalitarian and establish more of a class system.

Ottman: They’ve become, in this decision, less about moviemaking. It’s entertainment and the (award) shows need to be entertaining to get people to watch. But I think part of the intrigue of the (Oscars) is that they talk about making the show for the common man and so forth who aren’t necessarily in showbiz, but the common man wants to open up the hood and see what’s going on underneath. The common man wants to go through Willy Wonka’s factory gates and see how it’s done.

This is a huge moment of being completely out of touch with their own existence. They’re supposed to intrigue the audience with the craft of moviemaking, not distract them by a tap dance number.

Myron and Ben, you were both on the town hall Zoom call where the decision to eliminate the live presentation of the eight categories was revealed. How did that feel?

Proudfoot: There were a lot of grumpy people. I think it was just a surprise. Two conversations are happening; one is, hurt feelings and how the news is delivered. The other is the larger philosophical question about how artists, craftspeople and filmmakers now and in the future will be recognized and that the Oscars do that in a way that doesn’t impinge on any perceived importance of any one category over the other.

People were disappointed and hurt, and in some cases angry, and understandably so. At least for me, in the time since, I’m much more out of my feelings about it, and more in my mind. I’ve been trying to educate myself about the fact that there’s been a long conversation about whether or not categories should be removed from the telecast altogether.

In as much as I think we can do better than this decision, I am glad that somebody made sure that at least all the categories would be in the telecast itself.

Kerstein: You go from this, which outside of getting married or your kids being born is one of the greatest moments of your life, to shock and confusion, and a bit of anger and sadness.

I acknowledge that the Academy has a huge problem in its hands. Not only [do they have to] compete on live television, with all the kids who are on TikTok, and in the thousands of hours of other programming at any given moment. To get people hooked in for three hours, that is nearly impossible. This is what we do as filmmakers trying to keep people engaged.

Ottman: Those kids on TikTok, don’t you think they are intrigued by how a movie is made? Wouldn’t it be interesting if the show is more about that?

Kerstein: I have a 15-year-old son who has three devices open at any given point. He’s watching, he’s drawing and watching YouTube, checking social media, and maybe he cares about watching something live. Live television is a tough thing, it’s a bit of an antiquated thing that needs to be modernized.

I don’t know what the right answer is. There was one year when the Academy showed a little package of how editing works, and it got me excited. I thought, ‘This is what we need to do every year, educate the audience.’ Editing is the invisible art, you get caught up in the storytelling, you don’t notice the editing anymore. I believe that films and art can change the world, but it’s also a business. I understand that but from the Academy’s perspective, and the network’s perspective.

Director Guillermo del Toro did speak up, saying that this is not the year to silence voices. Randy, you had some thoughts on that.

Thom: People who are nominated are notoriously careful about saying anything controversial at this point when they don’t know whether they’re going to win or not. But it was incredibly b