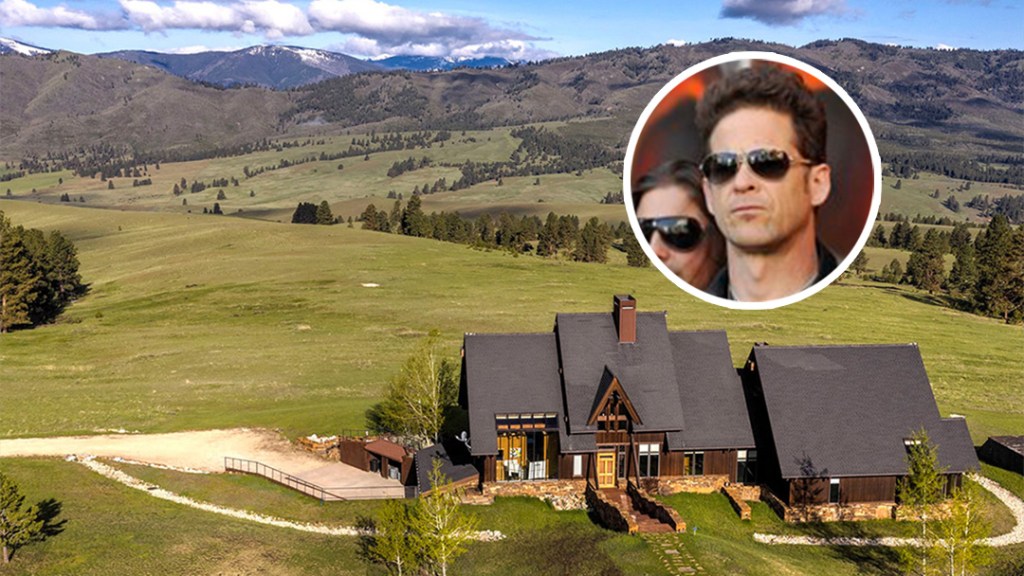 It’s a long way from the stadium rock of Metallica, but former bassist Jason Newsted, who left the band in 2001, found the right (and remote) place to recuperate after years on the road with the heavy metal legends. And he must’ve finally got the ringing out of his ears, because the 57-year-old put his scenic 545-acre spread near Sula, Montana, on the market for just under $5 million. Along with the the almost 6,000-square-foot, two-bedroom and two-bath main residence, the compound comprises a caretaker home, a two-bedroom guest apartment, two large machine shops and a greenhouse.

Rust-tinted concrete steps lead down to the main residence’s front entrance, where cavernous, open-plan interior spaces mix Rocky Mountain rusticity with clean-lined architecture, and are defined byvariegated flagstone floor tiles, majestically high cathedral ceilings befitting an actual cathedral, and vast windows that continue across the ceiling to allow for unusually expansive mountain and sky views. At the center of the huge space stands a commandingly massive, freestanding Rumsford-style stone fireplace. With the same, voluminous vaulted exposed wood ceiling as in the living room and anchored by another imposing fireplace, the principal bedroom looks out through a towering wall of windows that frame serene mountain views beyond the undulating valley floor.

Other features include a petite wood-paneled library, a glass-walled solarium that allows for truly, almost unnervingly unbridled views and — unsurprisingly — a soundproof lower-level recording studio. The vast, bespoke recording space features a custom guitar safe and a decorative starburst on the wall at the studio’s entrance, fashioned from exotic woods sourced from the nearby Gibson guitar factory. The studio area also boasts another stone fireplace, plus a a flatscreen TV that makes the space ideal for lounging between fireside recording sessions. Not visible from the front of the house — and no-doubt a great crash pad for visiting musicians — the guest apartment is a more traditional log cabin.

Newsted never fully retreated into his wilderness getaway since quitting Metallica almost twenty years ago. Most notably he’s been involved with Echobrain, Ozzy Osbourne, and led the band Newsted from 2012 to 2014. He is also the founder of the Chophouse Records studio and label, based in California.