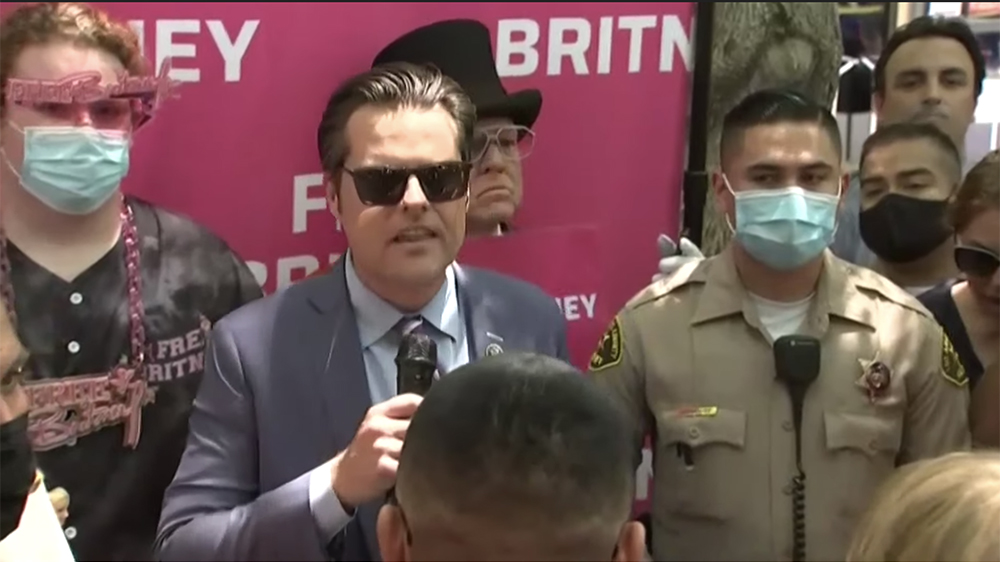 Rep. Matt Gaetz, the highly controversial conservative Republican congressman from Florida, made a surprise appearance at a “free Britney” rally, accusing her father, Jamie Spears, and others of being “grifters” who have victimized the singer, as a court hearing was taking place in Los Angeles. He also called Spears’ father “a dick.”

“If this case does not result in freedom for Britney Spears,” Gaetz told the cheering crowd, “it is a black eye for the American justice system.”

“There were grifters in this process,” the congressman said, that claimed “they knew what she wanted. And now the whole world knows what Britney wants – it is the freedom and liberty that should be offered to every single American.”

He claimed the current system “empowers people to take advantage of the weak,” noting that Spears is “nearly 40 years old. She should make her own decisions… Britney has a chance because we all love her and care about her.”

On July 1, Gaetz was one of several Republican members of Congress — he cited the support of Reps. Marjorie Taylor Greene (Ga.), Burgess Owens (Utah) and Andy Biggs (Ariz.) — who invited Spears to come to Washington and testify about her conservatorship.

Not all of Spears’ fans wanted the polarizing politico’s support. “Matt Gaetz speaking at the Free Britney rally right now is the crossover I did not see coming,” tweeted one. “Leave Britney alone, Matt Gaetz!” wrote another.

Gaetz, one of Donald Trump’s most faithful supporters in Congress, is currently under investigation for obstruction of justice after an associate, Joel Greenberg, pleaded guilty to sex trafficking of a minor and implicated his former friend.