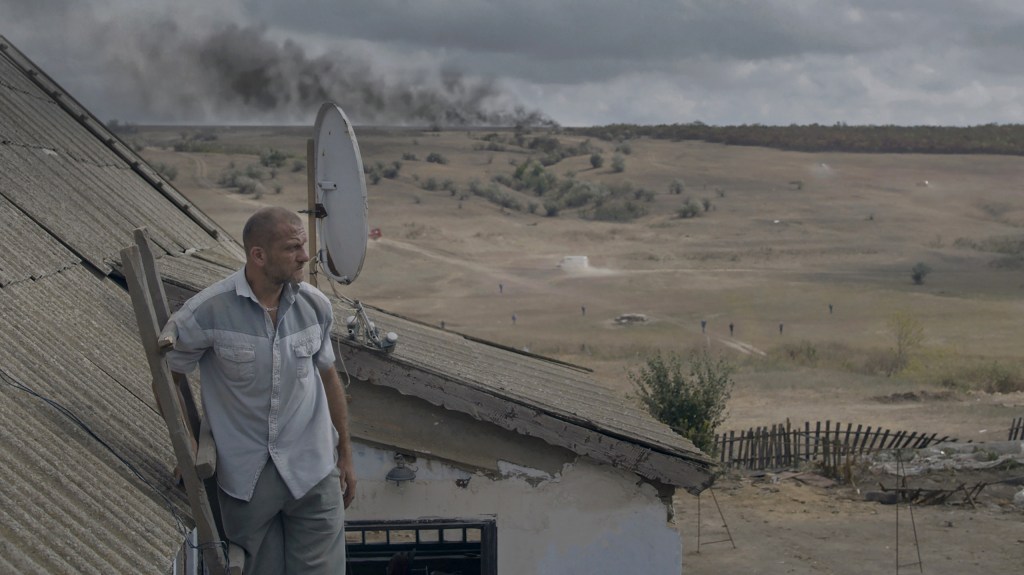 Personal and political turmoil face a serene camera in “Klondike,” a vision of the ongoing war in Donbass war that brooks no compromise in depicting the severe impact of the conflict on the region’s civilians — in particular, the innocent women to whom the film is dedicated. Ukrainian writer-director Maryna Er Gorbach largely assumes the viewpoint of a heavily pregnant farmstead owner as her life and home quite literally fall apart on July 17, 2014, the day a Malaysia Airlines passenger flight was shot down over Donbass, killing nearly 300 people. Irka (Oxana Cherkashyna) is determined to stand her ground even as her fellow villagers flee oncoming armed forces. In Er Gorbach’s potent film, shot in unbroken, unblinking takes that observe obscene violence and destruction with cold candor, Irka’s resistance to warfare is at once fierce and futile.

Winning the directing award in Sundance’s World Dramatic competition — ahead of a European premiere in Berlin’s Panorama strand — ought to boost “Klondike’s” profile with more adventurous arthouse distributors. Er Gorbach’s film remains a tough sell, however, with its relentlessly downbeat worldview only sporadically tempered by quietly mordant humor, stray instances of domestic tenderness and the considerable beauty of cinematographer Sviatoslav Bulakovskyi’s deep, desolate widescreen compositions. As Russian military buildup on the Ukrainian border intensifies, meanwhile, “Klondike” has chilling topicality in its favor, even if the tensions it shows are all too longstanding.

The real-life plane crash isn’t the first shattering event that jolts “Klondike’s” fictional narrative into action. That comes in the film’s opening scene, as the modest farmhouse that Irka shares her her husband Tolik (Sergey Shadrin) falls prey to a mortar misfire — decimating one exterior wall, and leaving the interior a wreckage site of dust and debris. An alleged “mistake” on the part of local anti-Ukrainian separatists — one of whom is a none-too-apologetic friend of Tolik’s — the incident is, in Tolik’s view, the final straw that should prompt he and his wife to get out of dodge before their child is born. Irka, however, resents the idea of having to leave her home over men’s fighting, and obstinately enters survivalist mode: preserving vegetables, milking their one weary cow and attempting a cleanup of their ruined, now al-fresco living room.

Yet when the plane goes down not far from their farm — the crash site a smoking red flag on the horizon, approached in long shot by crawling emergency vehicles — even Irka’s doughtiness takes a knock. A large scrap of aircraft fuselage is flung into their farm, standing in stark fields like a surreal, skeletal monument to lost life; they’re further drawn into the tragedy when a Dutch couple turn up days later in search of their missing daughter, one of the plane’s passengers. Er Gorbach’s script condenses history somewhat by having contentious NewsCorp footage of anti-Ukrainian rebels ransacking the crash site — embedded in the film itself — emerge mere days rather than a year later, fueling ideological discord between Irka and Tolik.

Irka, like her volatile younger brother Yuryk (Oleg Scherbina), is loyally pro-Ukrainian, and while Yuryk condemns Tolik as separatist scum, the truth is he’s that not very politically impassioned at all. As Tolik attempts to play all sides for the sake of domestic contentment and protection in the community, his middle ground becomes untenable once aggressive soldiers invade their vulnerable home turf — with Irka due to give birth at any moment. Without undue contrivance or melodrama, El Gorbach overlaps escalating marital tension with the larger war closing in on the couple to claustrophobic life-or-death effect, building to a finale of staggering savagery. There’s enough vivid conflict at play here that the insertion of the real-life Malaysia Airlines horror perhaps isn’t strictly necessary as a contextual device — though its accompanying circus of mourners, gawkers and authoritarian ghouls contributes to the film’s spiraling end-of-days atmosphere.

That air of chaos, meanwhile, is kept in check by the stark formal rigor of El Gorbach’s filmmaking. Acting as her own editor, she’s sparing with her cuts, opting to reveal key information either through long, patient pans, or by letting human interactions play out in full, sometimes in the middle distance, as the camera plants itself and watches. The rolling panorama from Irka’s bombed-out living room — over multiple planes of emptying, pointlessly fought-over farmland, toward the smoldering atrocity on the horizon — becomes the film’s default view, picturesque and unspeakable in equal measure. Irka is sufficiently fascinated by it to suggest they rebuild the missing wall simply as a giant window, though it pains the viewer to imagine what will ultimately be left to look at, and who will be left to look.