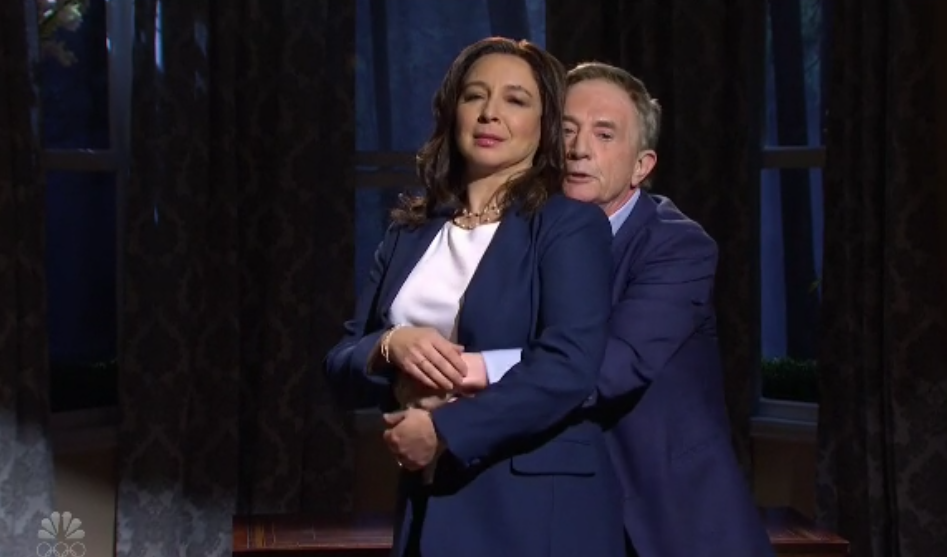 When Maya Rudolph returned to Studio 8H to host “Saturday Night Live” on March 27, so too did her take on Vice President Kamala Harris make a comeback.

It didn’t come until a third of the way through the episode, but when it did, it included bonus Martin Short as the second gentleman of the United States, Doug Emhoff.

Delivering what at first appeared to be an address to America, she said, “This has been a difficult year for all of us, but I really do feel that we are about to see some light. And what better night to celebrate a new beginning than Passover — or, as my adopted people call it, Pesach.”

The lights came up on her, and she revealed she was really doing “A Kamala Harris Unity Seder,” during which she would tackle the four big questions at such events: “How’s school? Did you eat? When are you giving me grandchildren? And, what’s with that haircut?” And to help her with such things, she brought out Short as Emhoff.

Although he started out shy, she encouraged him by telling him to pretend it was just the two of them. The lights lowered again, music flowed in and they exchanged romantic words. But soon enough it was time for the guests to arrive. The first was Aidy Bryant as Ted Cruz, because, as Rudolph’s Harris put it, the president encouraged her to reach across the aisle, so she started “at the bottom.”

“I’ve never been to a Jewish dinner so I brought some Israeli flag cupcakes,” Bryant-as-Cruz said, “and I’ve got a ton of these leftover from the CPAC. And I’ve got some pigs in a blanket.”

Bryant-as-Cruz then blamed his daughters for one of his mistakes again, this time “scraping the crap out of a Prius in your driveway.”

Kenan Thompson as Rev. Sen. Raphael Warnock was the second guest. When Rudolph-as-Harris asked how things were going in Georgia, he replied, “You saw ‘Roots,’ right? That’s how it’s going in Georgia.” She wanted to make sure Georgia stayed blue “for the next presidential election — and the one after that.”

Thompson-as-Warnock pointed out that won’t be easy because “if they had their way,” Black people wouldn’t be allowed to vote on anything, “not even ‘American Idol.’”

Alex Moffat reprised his role as Joe Biden, who came by to ask if they caught his press conference and to tell Rudolph-as-Harris that he was putting her “in charge of solving the little immigration problem down at the Mexican border.”

“Thank you for the opportunity. Such a fun, solvable problem. And what are you in charge of?” she replied.

With Moffat-as-Biden was a German Shepherd who played Major, “back from being retrained,” the cast member noted. The show piped in some dog growls and “he” soon lunged at Short-as-Emhoff. Using a stuffed animal that someone tossed at Short from off-camera, the veteran comedy star rolled around on the floor as if being attacked, while the others went on with their conversation in the background.

Short-as-Emhoff got up after “something spooked that hell hound.” “Why, it’s Marjorie Taylor Green,” Rudolph-as-Harris said, as Cecily Strong as the U.S. rep climbed through the window.

“Ever since Jan. 6 I’ve only been entering dwellings insurrection-style,” she said.

And Chloe Fineman portrayed Ella Emhoff, who came out to runway music and struck a pose before saying, “Shalom to the children.” As she vogued, she said she might look “insane” to some but could assure that she’s “the most normal looking girl in Bushwick. Mamala’s serving matzo while I’m serving looks.”

Worried that the “unity” event was actually pulling people apart, Rudolph-as-Harris needed a bit of a pep talk from her husband. The lights dimmed again, the music returned, and Short-as-Emhoff quoted “Dayenu,” saying, “It would have been enough. And if you’re just Vice President–“