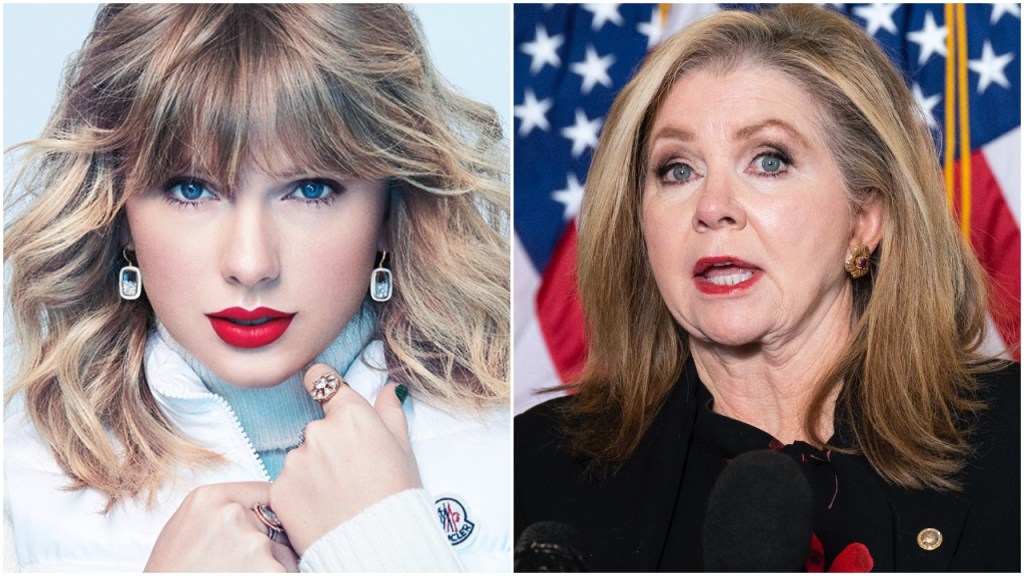 Although Taylor Swift is probably not inclined to take any advice from Marsha Blackburn, the Republican senator from Tennessee that she forcefully campaigned against in the last election. Blackburn is offering the singer some anyway: Watch out, because the Marxists who want to take over America will be coming for you first.

In an interview with the conservative outlet Breitbart, Blackburn warned of leftist totalitarianism she believes is an imminent thread to American freedom, saying that Swift will be banned altogether from public life if the country takes a leftward tilt, and all but suggesting she would be headed for a gulag if progressive trending goes unchecked.

“Taylor Swift came after me in my 2018 campaign. But Taylor Swift would be the first victim of that,” Blackburn said as her interviewer nodded, “because when you look at Marxist socialistic societies, they do not allow women to dress or sing or be on stage or to entertain or the type of music she would have. They don’t allow protection of private intellectual property rights.”

Blackburn also warned her supporters that country music is already under a subversive attack from within, saying the genre is in danger of becoming too “woke.”

“When you talk about country music,” said Blackburn, “and I know the left is all out now and trying to change country music and make it woke… When I’m talking to my friends who are musicians and entertainers, I say, ‘If we have a socialistic government, if we have Marxism, you are going to be the first ones who will be cut off because the state would have to approve your music.’”

Sen. Marsha Blackburn continues her running feud with Taylor Swift, warning her that if we have a “socialistic govt,” the state would have to “approve her music,” and won’t “allow women to dress, or sing, to be on stage, or entertain.” pic.twitter.com/HGXziiai8K

Three days ago, Blackburn subtweeted Swift on Twitter, referencing her song “All Too Well” as she praised conservative singer Aaron Lewis, the Staind frontman turned belligerent country solo artist, for putting out an anti-liberal song. The Breitbart article Blackburn tweeted out noted that Lewis’ song “Am I the Only One” had nudged ahead of Swift’s new collaboration with Big Red Machine on the iTunes singles chart.

“Aaron Lewis’ song has resonated with the American people All Too Well,” read the shifty, Swiftie-baiting tweet.

Lewis’ song includes lines like: “Am I the only one who quits singin’ along, everytime they play a Springsteen song?”

Aaron Lewis’ song has resonated with the American people All Too Well. They are replying you are not the only one!https://t.co/IEWJOiWJLS

Blackburn may still be most famous across America for her feud with Swift first, and as an avid challenger of the “tainted” 2020 election results only secondarily.

Swift broke her political silence in 2018 to come out against Blackburn’s campaign. “Her voting record in Congress appalls and terrifies me. These are not MY Tennessee values,” the singer wrote at the time. Later, in the 2020 “Miss Americana” documentary, Swift was portrayed as discussing just how forcefully to come out against the woman who is now her home-state senator, telling cohorts, “She gets to be the first female senator in Tennessee, and she’s Trump in a wig. She represents no female interests.”