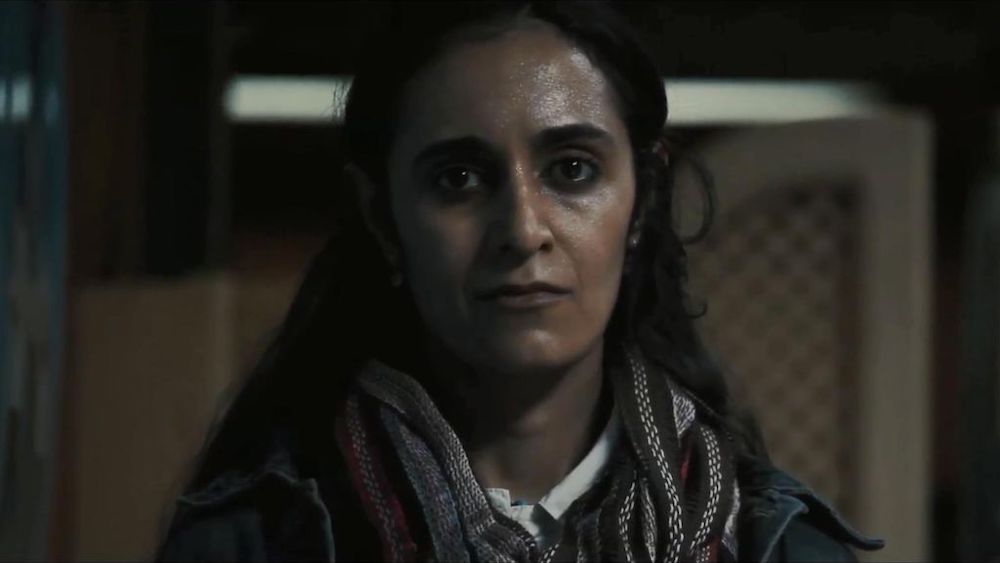 Ten years ago in January, the people of Egypt took to the streets to demand the fall of President Hosni Mubarak and his regime. It was the most spectacular of the revolutions during the so-called Arab Spring both in numbers and media coverage, as well as for the abject failure of its goals. Manal Khaled’s long-gestating, aptly-named “Trapped” is composed of three stories set in those early days, when people from all walks of life were thrown together during the struggle for freedom, sharing their fears and hopes with strangers. The film is a relic in some aspects, begun in that heady time but only finished now, trying hard to resurrect the moment in a way that still feels relevant. That it struggles to do so is more a reflection of the prosaic nature of the filmmaking rather than the spirit of those involved.

The subject alone is a dangerous one to address in the current Egyptian political climate given the heightened state of repression under the military dictatorship, and Khaled struggled to find backers, ultimately crowdsourcing funding via Indiegogo (the film has no production company behind it). She plays it safe for the most part, careful not to proclaim any affiliations, though portraying plain-clothes cops as crass heavies may raise red flags at home. The real kicker is in the final line, when the camera pans above the actors and a character wonders aloud, “Do you think that we will ever take to the streets again?” It’s at this final moment that the film’s title feels especially germane to the present situation, when the sense of being trapped has never been greater, and street protests seem a distant dream.

The first story, shot by Mahmoud Lotfy, takes place in the wee hours of Jan. 25, in a typical cell phone store in Downtown Cairo. The owner (Osama Abo El Atta) is about to close after a long day in which unrest in the streets has only just settled down, when a young woman (Reem Hegab) seeks refuge from the police. Terrified of getting caught and uncertain whether the shop owner will protect her, she passes tense moments cowering in the back until realizing he’ll keep her safe until morning.

Story number two, shot by Tarek Hefny, is set in a characteristic crumbling small apartment building, where nurse Neama (Neama Mohssen) frets that the street protests will make it difficult to get to work. With no one to help look after her young daughter Farah (Farah Maged), she plunks her in front of the TV, tells her she’ll be back in an hour, and locks the door. Shortly after, a middle-class woman (Mona Mokhtar) fleeing the police hides in the building’s foyer; realizing she’s there, they slyly padlock the gate with the idea of coming back when they have time. Trapped, she searches for a resident to help get her out, but only Farah is at home and she’s unable to open her own bolt, so the two carry on a conversation through a window in the door.

The final chapter, shot by legendary cameraman Zbigniew Rybczynski, is set in a down-market bathhouse in Historic Cairo. Some manhandling cops throw a couple of women protesters inside and tell the imperious owner Fouz (Zeina Mansour) to keep them there until they return. The two are from opposite ends of the spectrum: Salma (Habiba E’fat) is a short-haired mannish activist while Jihan (Caroline Khalil) wears a hijab and never joined a protest before. Together with Fouz’s earthy slavey Rabab (Rajwa Hamed) and a young actress client named Sally (Tharaa Gabel), the women measure each other up, trade barbs and finally relax into a sense of shared feminine solidarity.

With each story, the people who initially feel trapped discover the links of commonality with people of different perspectives and socioeconomic backgrounds. Though the physical camaraderie will be short term, the suggestion is that the sense of unity from being locked together (in a particular space, in a moment in time, in a nation) might fade but won’t vanish — a connection has been made, and the sense of common purpose will, hopefully, resurface.

The film’s shortcomings however can’t be ignored: Editing is weak, and especially in the last story, one suspects that the color correction hasn’t been finished. Acting too is uneven, not helped by the stereotyped nature of the characters at the end, each clearly representatives of types long familiar to fans of Egyptian cinema. Especially in the first two sections, Khaled clearly wants to convey a tactile sense of the city, fitfully captured in various closeups, but given the film’s piecemeal nature, it’s not enough to hold it all together.