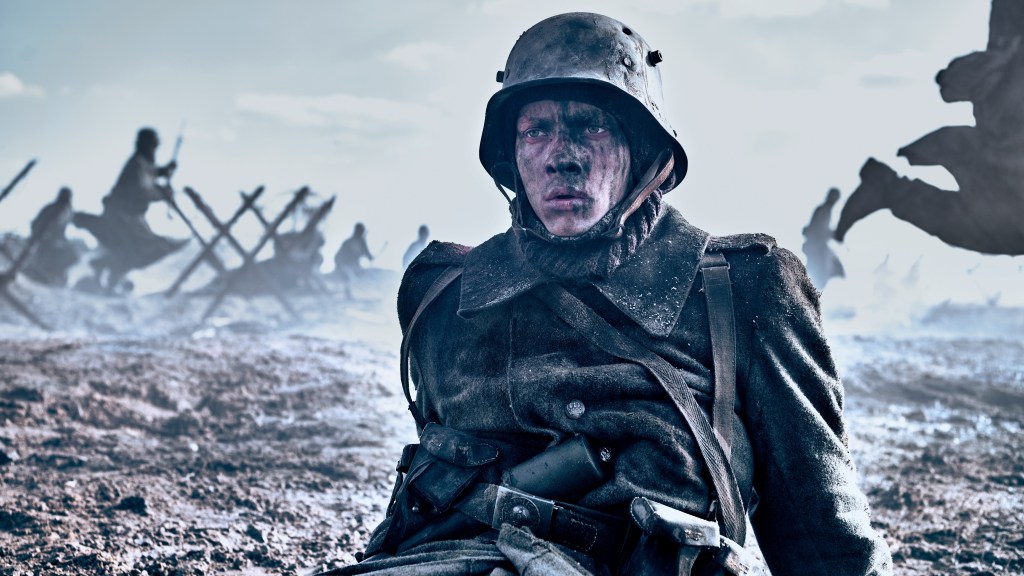 Director Edward Berger and producer Malte Grunert are set to follow up their new adaption of Erich Maria Remarque’s harrowing war novel “All Quiet on the Western Front” with a much more upbeat work, a remake of the rollicking 1967 French-Italian pic “The Last Adventure,” which starred Alain Delon, Lino Ventura and Joanna Shimkus.

Grunert and Berger had been working on the remake and were already in development when “All Quiet on the Western Front,” which makes its world premiere at the Toronto fest Sept. 12, came along.

They are now planning to return to the project after Berger finishes his next pic, the Vatican-set thriller “Conclave,” based on the Robert Harris novel and set to star Ralph Fiennes, John Lithgow, Stanley Tucci and Isabella Rossellini. Berger goes into prep on “Conclave” in October in Rome, with production scheduled to start in January.

Directed by Robert Enrico, “The Last Adventure” follows two down-on-their luck adventurers and a similarly destitute artist who team up to find a sunken plane full of treasure off the coast of Congo.

“That is going to happen after ‘Conclave,’” Berger says.

Adds Grunert: “With all the intangibilities of the film industry, that’s definitely what I’m planning for and it would make me very happy because basically I want to make every single film in the future with Edward.”

After the traumatizing subject matter of “All Quiet on the Western Front,” lighter fare would bring a welcomed change for the filmmakers.

“I need to get it out of my system and make something fun,” Berger stresses. “The immediate impulse is, let’s do the opposite. Let’s do something that is extremely entertaining and just fun for the audience. … That’s the main goal.”

For Grunert and Berger, the opportunity to adapt Remarque’s novel was nevertheless something neither could pass up.

“It’s such an important book, such a unique perspective on the First World War,” Grunert notes. “It is the bestselling German-language novel of all time for a reason.”

“It tackles certain issues that are extremely relevant. It’s a story about young boys who are, through propaganda, being pushed into a misguided sense of patriotism and who set off to war thinking it’s an adventure and are confronted with the realities of war.”

“It feels to me as if there are political instances happening all over Europe and the U.S., a growing nationalism, a sense of the European Union being under attack — the very things that enabled us to live peacefully and prosperously for 70 years now are being questioned. I think the book, and hopefully our film, talks about the consequences of that happening. And that felt very timely.”

Indeed, while Grunert says the film is not a direct comment on the Ukraine war, its story of war and the atrocities that happen to both sides can be seen as a message that “this should be avoided at all costs, if at all possible, because it’s a horror for everybody. It didn’t matter whether you were German or French, you died in exactly the same horrible way in the trenches. That’s what’s at the core of the novel: there are no heroes. The death of an enemy is not a good thing.”

When Grunert first approached him with the offer to direct the film, Berger recalls, “It just made so perfect sense.”

Describing the book as a “national treasure,” Berger says it seems like a complete oversight that it had never been adapted as a German-language film.

“It was probably also lack of opportunity. We fortunately live in a film funding time where suddenly that opportunity also came with the collaboration with Netflix. Now we can make international movies of that scale.”

The novel was adapted by Lewis Milestone in his Oscar-winning 1930 U.S. version and again by Delbert Mann in a 1979 TV movie starring Richard Thomas.

Berger and Grunert intended from the outset to make their version in German.

“There was no question about it. The only possibility was German,” Berger says, adding that the script by Lesley Paterson and Ian Stokell served as “a great basis.”

Berger further developed the script, adding more of a German perspective and sensibility to the story.

American and British films “have a different heritage. They bring a different feeling to a war movie. They bring a feeling, inevitably, of victory and heroism to it. As a German, you cannot bring that. You bring the feeling of guilt and shame and terror to it. From that perspective, the movie must feel very different.”

“All Quiet on the Western Front,” Germany’s contender for a best international feature film nomination at next year’s Academy Awards, boasts a large cast that includes some of Germany’s leading actors, among them Daniel Brühl, Albrecht Schuch, Devid Striesow and Edin Hasanovic. It’s Austrian newcomer Felix Kammerer, making his big-screen debut, who is at the center of the film as the young protagonist Paul Bäumer, however.

The filmmakers discovered Kammerer at Vienna’s Burgtheater, where he is an ensemble member.

For Berger, the young actor had the right look — a face that was “old-fashioned” and “transparent” — and the necessary acting chops for the demanding role, impressing the director with a “fantastic” performance in his first audition and continually outdoing  himself. “He was so eager to learn and to inhale the world of film.”

Berger shot the film in the Czech Republic, outside of Prague, where set designers built the German and French trenches and the no-man’s land in between, and a battlefield covered in barbed wire, bomb craters, corpses and animal carcasses.

Working with cinematographer James Friend and composer Volker Bertelman, Berger set out to create an atmosphere that reflected the terror and disorientation felt by the young main character. “Everything in this movie is there to express what Paul Bäumer is feeling, what’s inside his stomach.” The music, the set design and especially the position of the camera is always trying to give the audience the feeling of being in Paul’s boots, Berger adds.

He asked Bertelman to “make music that doesn’t emotionalize what this boy is [feeling], that doesn’t tell the audience what to feel but that tries to copy what the character is feeling. The music was supposed to break or destroy the image rather than score it.”

“All Quiet on the Western Front” screens Monday at the Toronto Film Festival and also unspools at the upcoming Zurich Film Festival.