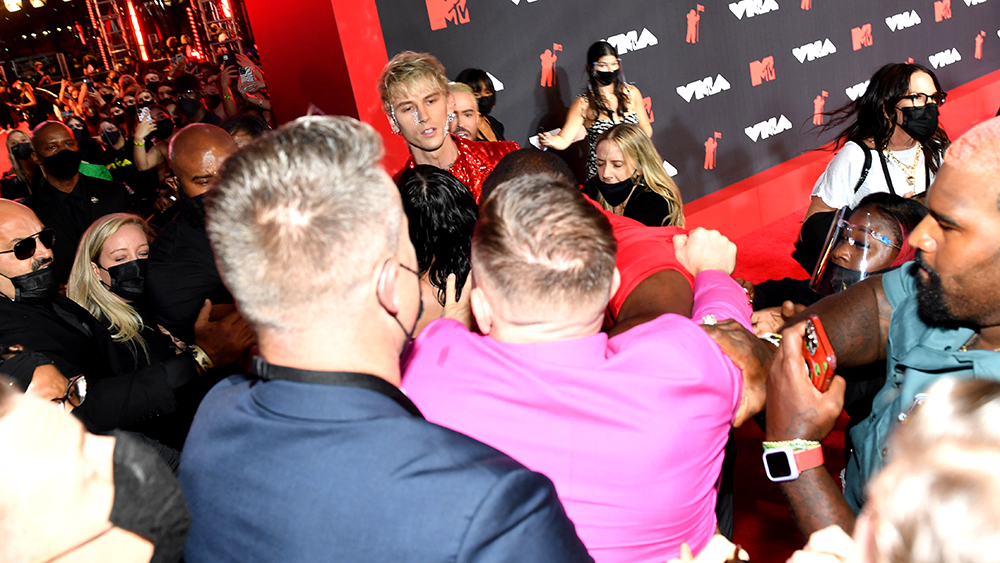 Machine Gun Kelly and UFC Champ Conor McGregor got into a scuffle just before the broadcast of the MTV Video Music Awards at Brooklyn’s Barclays Center, according to multiple reports on social media.

Shortly after, MGK, who’s nominated for his hit “My Ex’s Best Friend” featuring Blackbear, stopped by Variety‘s red carpet spot where he was asked what happened, but declined to answer (watch video below).

TMZ reports that the skirmish happened after Kelly refused a photo with the Irish UFC fighter. Sources are quoted as saying that McGregor stumbled, spilled his drink then threw the remainder at Kelly.

Shortly after, Kelly and Fox — wearing a Mugler dress — walked the carpet posing for photographers. Prior to the show, Kelly shared a picture of the couple dolled up for the evening with a sweet caption: “I found a mermaid.”

McGregor, 33, is recovering from breaking his leg following a recent bout in the ring, and was walking the carpet with a cane. He was at the VMAs to present the artist of the year award to Justin Bieber.

A rep for McGregor denied that a fight had transpired, telling Page Six, “Conor only fights fighters.”

Kelly is scheduled to perform  his new song “Papercuts” with Travis Barker at the awards show. He was a winner last year for Best Alternative video for “Bloody Valentine.”