Larry King’s widow has gone to court to challenge a handwritten will which purports to divide the talk show host’s estate among his children.

Shawn Southwick King argues that her husband had “questionable mental capacity” at the time the will was signed, just two months after he filed for divorce. According to her lawyers, King had just suffered a stroke and was susceptible to “outside influences.”

King died on Jan. 23 at the age of 87. He was survived by Shawn and their two children, Cannon and Chance, as well as by Larry King Jr., a son from a previous relationship. At the time of his death, the divorce had not been finalized.

In a petition filed on Feb. 10, Larry Jr., submitted the handwritten will, dated Oct. 17, 2019, which states that King wanted “100% of my funds to be divided equally among my children.”

In her filing on Tuesday, Shawn argues that the handwritten will has “no legal effect whatsoever.” She states that it conflicts with the will he signed in 2015, in which she was named executor of the estate. She was also made the sole trustee of the King Family Trust, which appears to hold the bulk of her husband’s assets.

She also accuses her stepson of exerting undue influence over his father in his waning years. She claims that she recently discovered a “secret account,” from which King gave his son more than $260,000. She contends that those were improper gifts of community property, and suggests she may try to recoup some or all of it.

In his petition, Larry Jr. argued that his father and Shawn were no longer together at the time of his death. Their house had been sold, and they were living separately.

But Shawn’s attorneys contend that King had allowed the divorce petition to languish, and that the couple still could have reconciled.

“After the filing, the parties had gone to counseling, were still speaking, and reconciliation remained possible until Larry’s health conditions made that impractical,” her filing states.

Larry Jr. asked the court to appoint him a special administrator of the estate. He also said that new officers needed to be appointed for his father’s companies: Larry King Enterprises and LK Productions. He said that someone needed to pay various bills, and that King’s assistant and health care aides had gone unpaid. He also asserted that King’s likeness was being infringed by online marketers, and that action was needed to stop it.

Shawn countered on Tuesday that the companies are loan-out companies, which are no longer have active business due to her husband’s death. She also states they are part of the trust that she controls.

According to Shawn’s filing, King split from Larry Jr.’s mother before Larry Jr. was born. She states that King had never met his son until the latter was well into his 30s, and that he had previously been unaware of Larry Jr.’s existence.

“Petitioner has never been involved in Larry’s career or business, and it would be highly inappropriate to place him in a position of representing Larry’s estate,” her filing states.

A hearing has been tentatively set for Feb. 24 in Los Angeles County probate court. 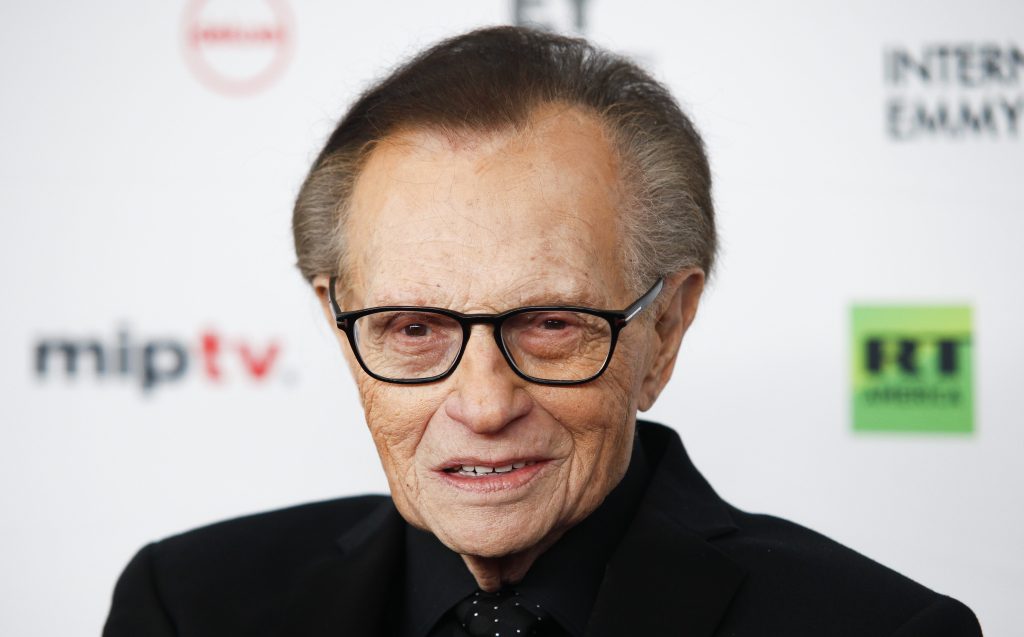 Larry King, the broadcast legend who died Saturday at the age of 87, deserves more credit than he typically gets for helping to build CNN and realize Ted Turner’s audacious vision for a 24-hour global news network.

In his prime, King’s “Larry King Live” interviews regularly made headlines thanks to his unique questioning style, which could be remarkably incisive about the subject at hand as well as, occasionally, cringe-worthy misinformed. As CNN gained prominence in the late 1980s and ’90s, King’s show became one of the hottest stops on the TV circuit for newsmakers, political leaders, captains of industry, crusading activists and celebrities, ranging from Barbra Streisand and Liza Minnelli to Donald Trump and Oprah Winfrey to Suzanne Somers and Barbara Eden.

The variety of King’s guests and the fact that it went out live every night at 9 p.m. ET/6 p.m. PT gave the show extra sizzle. The inclusion of call-in questions from viewers was a nod to King’s earlier radio days as a talk jock. The host took cues about what the general public wanted to know from the tenor of his listeners’ queries.

In a sign of how much the media universe has changed, it’s unimaginable in the age of social media that major stars, ex-presidents, U.S. senators and myriad celebrities would go live for an hour on TV with an interviewer who proudly didn’t like to prepare. King’s show sought to be the Instagram of its time, a hub of news and dish on the story that everyone in the country was talking about on any given day.

Naturally, King had good instincts for compelling stories. He was capable of coaxing his guests to explain the human dimensions of scandals, political battles or issue advocacy campaigns. He made stars of crusading, camera-hunting lawyers like Mark Geragos, Johnnie Cochran and Alan Dershowitz.

King first became famous in Miami but never lost his Brooklyn touches. He had a baritone voice that was made for AM radio and a presence on TV that commanded attention. He showed genuine exuberance for his work and curiosity about the people, causes and controversies that came before his old-school signature microphone. As CNN’s international reach expanded in the 1990s, King’s show served as a beacon of American culture for the world.

“Larry King Live” mostly originated from CNN’s studios in Hollywood. That made King perfectly positioned to zero-in on the O.J. Simpson murder drama from day one, following the brutal stabbing deaths of Nicole Brown Simpson and Ron Goldman in June 1994.

Family members of the Browns and the Goldmans and all manner of lawyers, witnesses and hangers-on connected to the case were regulars during the legal storm that engulfed O.J. Simpson in the mid-1990s. Simpson famously surprised King by calling in to his show (when his lawyer Cochran was the guest) the day after Simpson was acquitted of the murders in October 1995.

King was frequently criticized for softball questions and an overly friendly style. When Simpson called in, King mostly let him rant for about three minutes about the deficiencies of the prosecution’s case.

King made no apologies for his style when I sat down with him in 2013 in Miami. He was there for the annual NATPE programming convention to push international sales of his post-CNN interview show “Larry King Now.” King’s final series aired on the Ora TV digital platform funded by Mexican billionaire Carlos Slim.

King was proud of being an equity partner in the company. And while his reach may have been smaller than CNN, King’s legacy was strong enough to command such guests as Winfrey, Tony Hawk, Bob Woodward, Bill Maher, Ryan Seacrest, John Cena and many other boldface names.

In 2013, it was clear from his quips and cracks that King was still more than a little unhappy to have been ushered out of CNN after 25 years.

“I don’t answer to suits anymore,” he said with a grin. He was also clear that he didn’t feel the need to reinvent his approach to TV.

“I’m still doing what I did 55 years ago, asking questions of people,” King said.