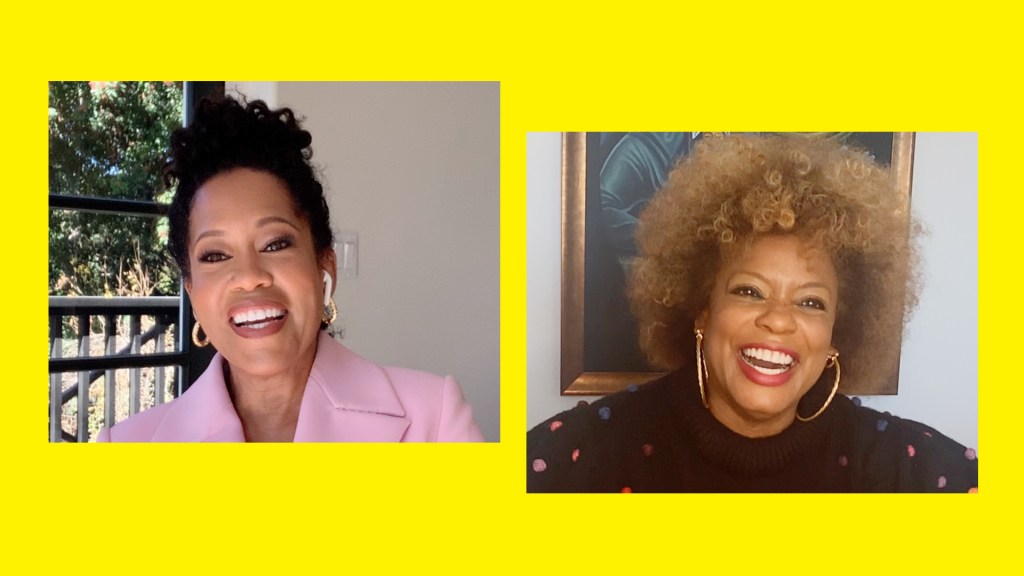 Aunjanue Ellis (“King Richard”) and Regina King (“The Harder They Fall”) sat down for a virtual chat for Variety’s Actors on Actors, presented by Amazon Studios. For more, click here.

Regina King and Aunjanue Ellis have shared the screen twice, in 2004’s “Ray” and 2018’s “If Beale Street Could Talk.” In both outings, the actors played adversaries — first as songstresses competing for Ray Charles’ affections and then as the mothers of the central lovers in “Beale Street” who don’t see eye to eye about their children’s relationship.

“I feel like we’ve been robbed,” King says. “We need to have something where it’s just me and you all the way through.” To which Ellis jokes: “What do you mean? Two women actually talking on screen?”

The laughs continue as the actors discuss their creative process crafting their latest characters — King’s “Treacherous” Trudy Smith in “The Harder They Fall” and Ellis’ Oracene Price, mother to (and coach of) future tennis legends Venus and Serena Williams in “King Richard.” But as the conversation turns more serious, King and Ellis tear up talking about the responsibility they feel toward the next generation of Black women. (This interview was conducted before King confirmed on Jan. 21 the sudden death of her son, Ian Alexander Jr. He was 26.)

AUNJANUE ELLIS: I just remember during “Ray,” we were going at it, and I tried to sidle up to you a couple times, just trying to chat …

REGINA KING: And I wasn’t having it? I was giving you Method actor?

ELLIS: But what was so great about it, as soon as the day was over, you were like, “Hey, what’s up?” I just realized, “Oh, she was focused,” Because, of course, my little feelings were all like, “She don’t like me, for real.”

KING: I was scared too.

ELLIS: Why? What were you scared of?

KING: It was the story of Ray Charles, the first time I had to study music as well as an era. It was that wonderful challenge that you get as an actor when you’re taking on a new role, but this one in particular just had so many more layers to it. I still get nervous, actually, to this day, right before I start a project.

With Oracene, did you have any of those trepidations playing someone that’s alive, that’s going to see you portray her?

ELLIS: Honest to God, I felt like I had so much to do that I didn’t have time to be scared. All I wanted was to show up, have the words right and get through the day. I’m thankful for that, because if I had gone into that head space, I would be playing the result of something, rather than the process. It would’ve brought me off focus, and just made me worse.

KING: Well, there’s no such thing as “worse” when it comes to you. It’s easy to fall into playing the result, especially when you know the whole story. That’s part of being an actor and active in the performance, remaining present in the moment. Ms. Oracene doesn’t know what’s about to happen on Tuesday, because right now is Saturday. “Play the process, not the result” — I have to write that down and put that on a sticker in the dressing room.

ELLIS: I wanted to ask you about “Jerry Maguire” and how whatever “technique” is for you, whatever your method is, played into it. What I saw in you in that performance was a clarity and a confidence in character. I see confident actors all the time, but I don’t necessarily see a confidence in character. That scene when you were talking to Jerry like, “I know the value of a dollar,” is tattooed on my brain.

KING: I can’t believe it’s been 25 years since that film. The character that I was playing, Marcee Tidwell, was so clear on the page. I felt like, “I wish I had her confidence. I wish I had her assuredness.” You hear that saying: “The woman behind the man, the woman is the backbone.”

ELLIS: Compare that to playing Trudy.

KING: First of all, I don’t have a technique. The only thing that I can say that I do that is the same with every role is building a backstory. Do you?

ELLIS: No. For me, technique is just what it takes to do what I’m trying to do. So that can be studying the words; that can be the music I listen to. I can’t talk to nobody before I go to set.

KING: We subscribe to the same thing, sis, because I’m the same exact way. When you said that on “Ray,” during the day I was not engaging — I don’t even remember that. But that’s the technique I must have felt I needed to have to play that role then. You don’t know what it’s going to be that you’re going to need to execute. It changes from role to role.

With Trudy, I decided to have a dialect. Do you remember Benicio Del Toro in “The Usual Suspects”? He had this accent that you didn’t really [recognize] like, “Where the hell is he from?” I wanted Trudy to be like that. Giving her that and the wardrobe was something that helped very much in informing how I would play her.

But it was tough because it was during COVID. Did you guys have a time where you had to break — stop, start back, any of that?

ELLIS: Yeah, we did.

KING: Did you find that that helped or hindered the process of your performance, having to start and stop again?

ELLIS: When we stopped in March 2020, I just thought that was going to be the end of it. I didn’t think we were going to come back at all, so I had let it go. I really didn’t think about it.

But I think because those couple months that we did shoot, and we’d had a really intense rehearsal period — Will [Smith] uses the word “marinate” and I think that’s a proper word for it — gave it time [for the role] to really get in my bones and get in my cells. When we did come back, I was probably a lot more relaxed than I was before.

KING: That kitchen scene, that tennis match between Richard and Oracene, did that happen before or after the break?

ELLIS: It happened after. I think maybe that scene wouldn’t have been as lived in if it happened before. Part of the reason, though, is that we were still writing. We were working on that scene that morning with Isha [Price, an executive producer on “King Richard”], Ms. Oracene’s daughter.

KING: That is really interesting because normally, you hear about writing still happening on a show. You don’t usually hear about that so much on a film. Sure, we get changes and new pages, but [not] to that extent. What was that process like?

ELLIS: Let me say that Zach’s script was great from jump. When we started working, what was revealed to everybody is that we could expand the women characters. When we got in the room and we started hearing it, everybody agreed that we can do better. But Zach had already written a really brilliant piece of work.

KING: That’s the beauty of thespians, right? Something can read a certain way on the page, and when you’re doing your homework before. I do a lot of my work by myself, because there is something so beautiful and magical that happens when I get to the set and we’re together, doing it live. Now I’m hearing the work that you are doing and feeling the work, and it turns into something that was nothing like what I was doing when I was by myself.

It sounds like that’s what happened on “King Richard” — it was great on the page, but then Will came and the young ladies came playing Venus and Serena and the orchestra comes to life.

ELLIS: I’ve heard Mark Wahlberg say something about this — when some people do the work by themselves in their room, then they come do it with you and the only thing they want to do is what they did by themselves. They win all the awards in their hotel rooms, so they don’t want to do nothing but that. [Both laugh.] But it’s a joy when everybody comes to work and says, “We are a part of an orchestra here. This is a collaborative thing that we are doing.”

KING: Thank you. [Wipes away tears.]

ELLIS: I wanted to hear a little bit about your awareness of that. Because that can feel like a heck of a responsibility, right? Then take that river down to the ocean of “The Harder They Fall” with Trudy, once again re-creating our idea of what is possible for a Black woman on screen.

KING: Whew, girl. Well, thank you for that, and for making it specific, because I’m so proud of being a Black American. I know that we call ourselves African American, but I’m a Black American, and I’m very, very clear about the history of being Black in the country that I live in. The thing that is so beautiful about it is how different we all are — and I don’t mean this to be funny — but we are so colorful. We are so rich in culture. We have so much substance. And so often, we allow that little box in our house or that big screen to tell us who we are and what our experiences are, instead of actually feeling who we are. That’s what