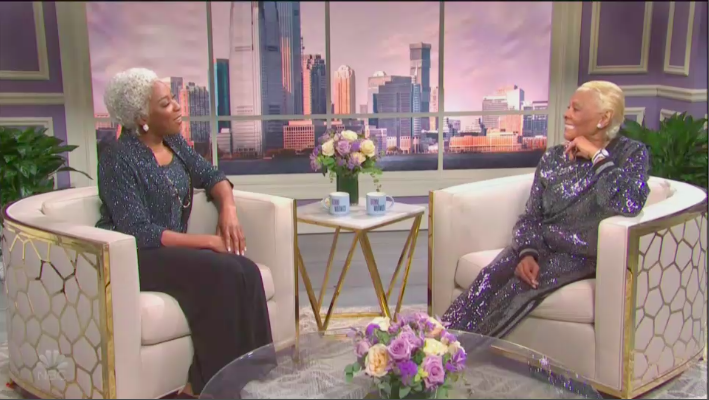 Played by Pete Davidson, this fictional version of Rodgers appeared on “Justice with Jeanine Pirro,” with Cecily Strong of course reprising her beloved role as Pirro. He joined her remotely to discuss how the “woke mob” is now coming after him.

“It’s my body and my COVID. I can give it to whoever I want,” he tried to argue. He also said he never lied about his status, noting that he took all of his teammates into a huddle, “got their faces three inches from my wet mouth and told them, ‘Trust me, I’m more or less immunized. Go team.’”

“People can talk all they want,” he continued, “but at the end of the day, my record is still seven and one. Meaning, of the eight people I’ve infected, seven are fine.”

That wasn’t the only weekly news “SNL” wanted to skewer in the cold open, though. Alex Moffat as Governor-elect Glenn Youngkin was the second guest on the show, saying that his win in Virginia proved how concerned voters are over education, though he said most of his voters are people who didn’t go to college. When Strong’s Pirro asked him what critical race theory was, he admitted it’s what got him elected, but said what it is is “not important.”

Instead he pivoted to allow one of his supporters to speak about “dangerous material that should be banned.” This woman was played by Heidi Gardner and said she was a big fan of Pirro’s judging but was against Toni Morrison’s “Beloved.”

“I put down my copy of ’50 Shades’ and said, ‘No. A woman named Toni? Not my America,’” she said. She then listed a few other books she feels should be banned, including Louis Sachar’s “Holes” because it “sounds sexual” and Jane Austen’s “Pride and Prejudice” because “prejudice is fine, but pride is a term that has been co-opted by the gays by some sort of Lady Gaga-themed nudity parade.”

“Moby Dick,” she said was a “toss up” because while the “title is dirty, love that the whale is white.”

Having Youngkin on the show allowed a segue into the return of Trump, now played by Johnson, as Trump wanted to take credit for getting Youngkin elected.

Johnson’s Trump ran down a list of advice he claims to have given over the years, some of which was not taken and “it didn’t work out so great for some of those people.” First on his list was “Star Wars,” which he said should have been done with swords. “The lasers are not enough,” he said he told George Lucas. “And look at what they’re doing with ‘Dune.’ … I see a lot of possibility with ‘Dune’ — two, three, four, 15 movies. And frankly, I see a lot of possibility with Virginia.”

Kieran Culkin was the episode host, while Ed Sheeran was the musical guest.

While this episode marked Culkin’s “SNL” hosting debut, he did appear on the late-night sketch show before — almost exactly 30 years ago when his brother, Macaulay Culkin, hosted on Nov. 23, 1991. The brothers, who had starred together in “Home Alone” the year before, performed a flashback sketch of Rob Schneider’s Richmeister character. Macaulay, the elder Culkin, played the younger version of Richmeister, while Kieran was a classmate on the receiving end of his incessant nicknaming. The official “SNL” Twitter account shared a clip from this sketch earlier in the day, but when Culkin took the stage at Studio 8H for his monologue, he reflected further on that experience, showing the clip of him on stage for the goodnight moment in the 1991 episode when he asked Kevin Nealon to lift him up since his brother was riding on cast members’ shoulders victoriously. Nealon obliged. Culkin recreated his hamming in mid-air during his own outro in this episode.

Culkin also used his monologue time to reflect briefly on the success of his HBO drama “Succession,” for which he was Emmy-nominated in 2020. He mentioned how fans often tell him how perfect the role of Roman Roy is for him, which he said is like being told a perfect role for you is Rudy Giuliani.

Later in the episode, Ego Nwodim brought back her beloved “Dionne Warwick Talk Show,” which featured Chloe Fineman as Miley Cyrus, Davidson as Post Malone, Culkin as Jason Mraz and Sheeran as himself. But most notably, it allowed for the real-life legendary singer to cameo as herself.

Sitting down with Nwodim as Warwick, she had to answer tough questions like, “Why are you perfect?” and whether she’d like to sing a song. With both women dressed in sequins and holding hand mics, they did a brief few bars of “What the World Needs Now Is Love.”

‘Succession’: Who Rises and Who Falls in the Season 3 Premiere?

SPOILER ALERT: Do not read if you have not yet watched “Secession,” the Season 3 premiere of HBO’s “Succession.”

Is it a coincidence that the two years since HBO aired a new episode of “Succession” have been two of the worst years in recent memory? Well, probably. Still: it certainly didn’t help that the exquisite catharsis of the Roys — in all their bickering, calculating, jaw-dropping glory — was unavailable to us in our darkest hour. As of Oct. 17, though, “Succession” finally returned to unpack the aftermath of the metaphorical bomb Kendall (Jeremy Strong) dropped on his father Logan (Brian Cox) in the Season 2 finale. Picking up mere minutes after the press conference in which Kendall decides to turn the tables on his dad for good, laying the blame for decades of abuse and negligence at his feet, the Season 3 premiere of “Succession” doesn’t let anyone, let alone its audience, take a breath before diving right in.

Reeling from the shock of his foot soldier stabbing him in the back on national TV, Logan sets about furiously figuring out his next moves now that his reputation, and perhaps even legal standing, is in more jeopardy than ever. As Kendall declares moral victory for taking a stand against the traditional Waystar Royco way of doing business, Logan and the rest jet around Europe in a half-panic, avoiding cities where he could be extradited. No one, least of all Shiv (Sarah Snook) or Roman (Kieran Culkin), quite know what the hell to do with themselves.

Suffice it to say, this premiere (cheekily called “Secession”) sets up a complex web of shifting loyalties, misguided schemes, and intriguing possibilities yet to come. This third season should be an especially seismic one for the Roys — which is saying something, considering that the show’s already featured everything from bribery to blackmail to vehicular manslaughter. In order to sift through it all, Variety will be taking a weekly look at where everyone in “Succession” stands in a way that even the Roys can understand: in powerful rises, and falls from grace.

So without further ado, here’s the rundown of “Secession,” the Season 3 premiere of “Succession.”