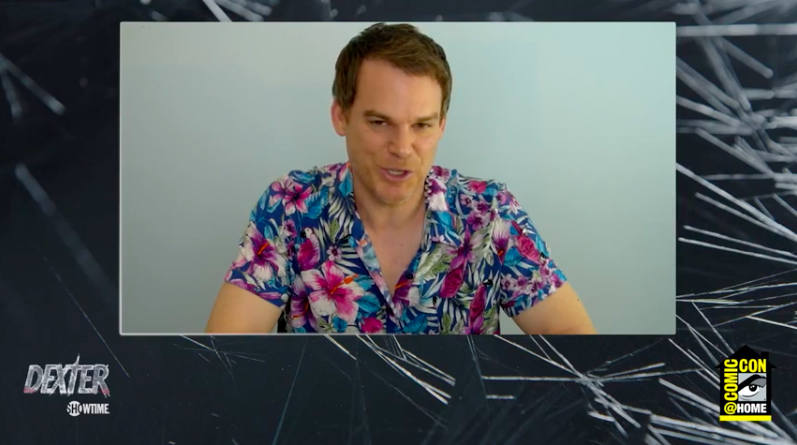 Michael C. Hall — serial killer Dexter Morgan himself — has known since Showtime’s serial killer drama “Dexter” ended that a return to the character was a possibility. Instead of being killed off in the end, he only faked his death, leaving his young son with another killer (Yvonne Strahovski) and hiding out as a lumberjack.

“It’s come up in different forms,” Hall said of revivals during the show’s Comic-Con@Home panel on Sunday. “It never felt quite right in terms of the story that was presented or in terms of the timing. But, I think, along with everybody on this panel and along with everybody who’s ever watched the show and is a fan of the show, I myself have also wondered what the hell happened to this guy. And I think enough has time has passed and the storytelling opportunities were a lot more interesting for having more time between the end and now.”

“Dexter” originally ran as a drama series on Showtime, premiering in 2006 and wrapping up after eight seasons in 2013. Less than a decade after its end, Hall was ready to step back into the character’s shoes, as well as to collaborate again with creatives including original showrunner Clyde Phillips and executive producer/director Marcos Siega, both who are also back for the 10-episode revival/continuation series, “Dexter: New Blood,” which will premiere Nov. 7 at 9 p.m. and which you can see a trailer for below.

“One of the things that Michael insisted on, and he was completely right, was that this not be ‘Dexter’ Season 9,” he explained. “This not the next moment after the lumberjack moment. … We pick up with Dexter in another place, in another world, actually, as far away from Miami as possible.”

That the original series ending was disappointing to a large contingent of the audience was “a huge part” of wanting to return to the show to offer another take on an ending, Hall admitted.

“I think the ending was mystifying, at best, to people — confounding, exasperating, frustrating, on down the line of negative adjectives,” he said. “And I think this is a show that’s very important to all of us and the chance to revisit it and maybe in the process redefine the sense of the show’s ending and the sense of the show’s legacy more broadly was certainly a part of our motivation.”

Showtime also offered a glimpse at exactly how the show will do that, not only by the presence of Julia Jones, a new cast member for the special limited series, on the panel, but also by dissecting a recent teaser for the new series.

Jones plays a woman named Angela, who is the first Native American Chief of Police in the upstate New York town in which she resides and lives (and will cross paths with the titular serial killer) — and who the actor called “challenging.”

“She’s dynamic and she has a lot to overcome,” Jones said. She is also romantically “together” with Dexter, she revealed.

In the new episodes, Dexter is not living quite as solitary a life as the original series ending may have assumed he would be: Then, the show faded out on his lone, sad, scruffy face, but now he walks through town where everyone calls out to him in cheerful greeting. Of course, they don’t call him by his previous name of Dexter Morgan — he is now known as Jim Lindsay, an alias Phillips said was something of an homage to Jeff Lindsay, who wrote the books on which the show was originally based.

“Going back to the way the show ended, I think we see Dexter having made a choice to go into self-imposed exile. And I think he’s doing very, very long, protracted penance for the people who’ve died who were close to him and not intended victims because of how he’d been living — how he’d been playing fast and loose with the code,” Hall said.

One of the things Hall believes was “confounding about the [original] ending was that Dexter didn’t say anything to us. We were accustomed to listening to his voiceover; a fundamental part of the show was feeling like you were in on his secret and implicated as a result. And the fact that he just looked at the camera and didn’t say anything was like, ‘Whoa, what are we supposed to do with that?’ So that look to the camera [in the teaser now] is kind of like, ‘Hi, I’m back, hello again.’”

And of course that has to mean he can’t abstain from his ways for too long or there would be no reason to return to the character.

“Dexter is exercising the power of his restraint,” Hall said of where we find Dexter, noting that his choice to live in a town without a lot of temptation is intentional. “His ability to not do it is something he fixates on as something as a new kind of power. It’s the only way I can imagine him living with killing — if, in fact, he hasn’t been killing.”

Dexter has been “encouraged to believe he can’t have his cake and eat it too and that if he wants to live a life and continue to do this very quiet, very unacknowledged penance for what he’s done, he’s not going to be able to go around killing people,” Hall continued. “If he’s going around killing people, he’s going to struggle to have a life … though he does maintain a fantasy that he’s able to do both.”

Given that he is carrying a leather knife wrap around town, that fantasy is certainly about to become a reality.