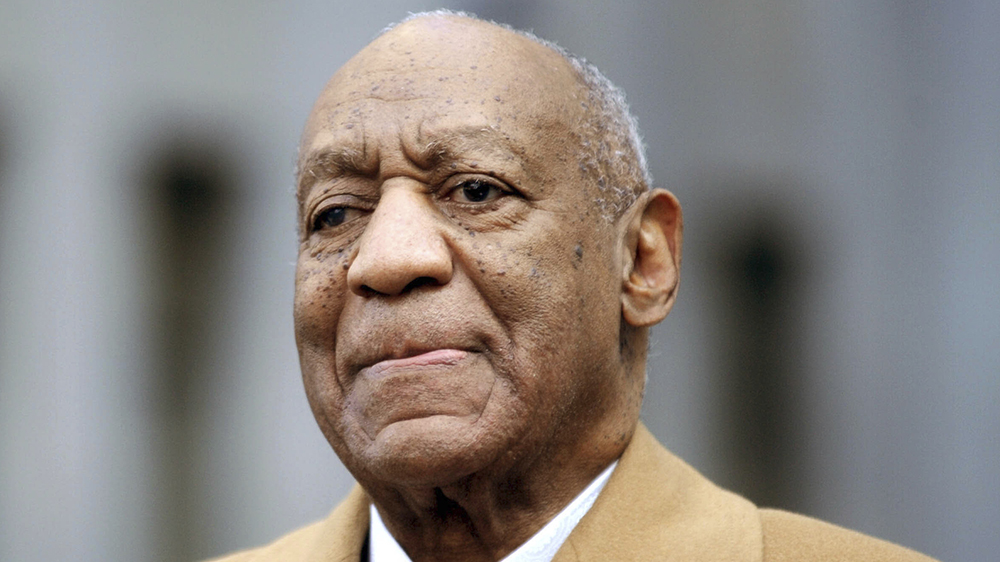 A chaotic scene ensued outside the Santa Monica courthouse on Tuesday after the latest legal verdict to go against Bill Cosby in connection with sexual assault allegations.

The few minutes of mayhem occurred shortly after Cosby was found to be liable of sexually abusing a 16-year-old in 1975 after she accepted his invitation to the Playboy Mansion. Judy Huth, who is now 64, told reporters on Tuesday afternoon that she was “elated” by the civil jury’s decision in her favor.

As Cosby’s team took their turn at the media microphones outside of court, their words were drowned out by screams from protestors.

“Bill Cosby is guilty!” a woman yelled, shouting over Cosby’s team at the podium and brandishing him a “serial rapist” in light of the disgraced comedian’s reckoning with sexual assault allegations from dozens of women. Cosby was incarcerated in Pennsylvania for three years in connection with a 2004 assault case. His 2018 conviction was reversed by a state appellate court, and he was released from prison in June 2021.

On Tuesday afternoon, a civil jury found that Cosby sexually abused Huth when she was a minor. The jury ordered Cosby to pay her $500,000 in damages. Though the jury determined that Cosby was liable, they did not award Huth punitive damages.

A handful of Cosby survivors, who previously testified against him in criminal trials, were present throughout the trial this month. They were out in force on a warm Santa Monica afternoon when the verdict came in today.

Wyatt, who has been Cosby’s consistent mouthpiece during his legal travails, followed comments from Huth and her representative, high-wattage civil rights attorney Gloria Allred. Not surprisingly, Wyatt put a different spin on the decision.

“The victory was ours because we got to disclose and show what this woman was all about,” Wyatt said, speaking of Huth. “There was no win here. She would not be getting a dime by filing appeals. But you know what? It just shows the level of people that Gloria Allred seems to go after: people who are not really victims. People who want to victimize other people.”

Wyatt criticized Allred for “going after a Black icon.” He then doubled down and called Cosby “our Black icon.” The spokesman also took issue with Allred speaking about Juneteenth in the courtroom on Monday, when she told the judge that she believed the court should be closed to observe the federal holiday. (In court on Monday, Wyatt was murmuring that Allred was “exploiting Black people” and called her comments about Juneteenth “racist.”)

Wyatt’s comments were admonished by a small handful of Black female survivors of Cosby who were present at the courthouse for the verdict. “I’m a Black survivor! I’m a Black survivor!” one woman shouted through tears, passionately disagreeing with Cosby’s spokesman. “I’m a Black survivor of him!” (These women also approached Variety in the courtroom on Monday to say they were glad that Allred spoke about Juneteenth in court to honor them and the holiday.)

As the scene was growing louder, Cosby’s lead attorney on the case, Jennifer Bonjean, walked off, saying, “This is crazy.”

“We’re not dealing with this,” Wyatt echoed, only to scurry back to the podium to answer more questions. When asked by a reporter for Cosby’s reaction to the verdict, he said, “Mr. Cosby’s reaction is that he and Mrs. Cosby are happy, they’re proud.”

Looking at a woman who was shouting at him, Wyatt said, “We will let her scream to the public because she’s not relevant. All of these women want to be relevant and they come back 50, 60, 70 years later, trying to be relevant. Y’all can have this free time and have your 15 minutes of fame, but this is over.”

Then suddenly pivoting to a different case, Wyatt vehemently shouted that Cosby’s “criminal charges were vacated in perpetuity.”

Towards the end of his passionate remarks, a reporter asked Wyatt a direct question: “The jury found that Cosby did sexually abused Judy Huth. What do you say to that?”

During her remarks, Allred noted that the case is the first to go to trial under California’s Child Victims Act, which is part of a nationwide reform movement to help victims of sexual crimes seek justice. The legal reform that adjusted statutes of limitations took effect in 2020.

“It’s an important message to other survivors of child sexual abuse that you can sue, even decades after you were sexually abused as a child,” Allred said. “You do have rights, you do have access to the civil system of justice in order to assert their rights and indicate their rights in a court of law against the person that they accused of sexually assaulting them when they were children.”

Allred’s partner, Nathan Goldberg, who served as Huth’s lead litigator in the courtroom, echoed those sentiments and explained the larger significance of the legal ruling in light of changing rules for statute of limitations in sexual assault-related cases.

“There is no other case that I’m aware of where someone like Ms. Huth obtained justice 47 years after the fact. And that is what makes this really and truly remarkable, in terms of a lawsuit,” Goldberg said. “It proves that you can run, but you can’t hide.”

Bill Cosby’s team spoke to press after he was found guilty of sexually abusing a 16-year-old in 1975. Protestors chanted phrases like “Cosby is guilty” until his legal team stormed off. 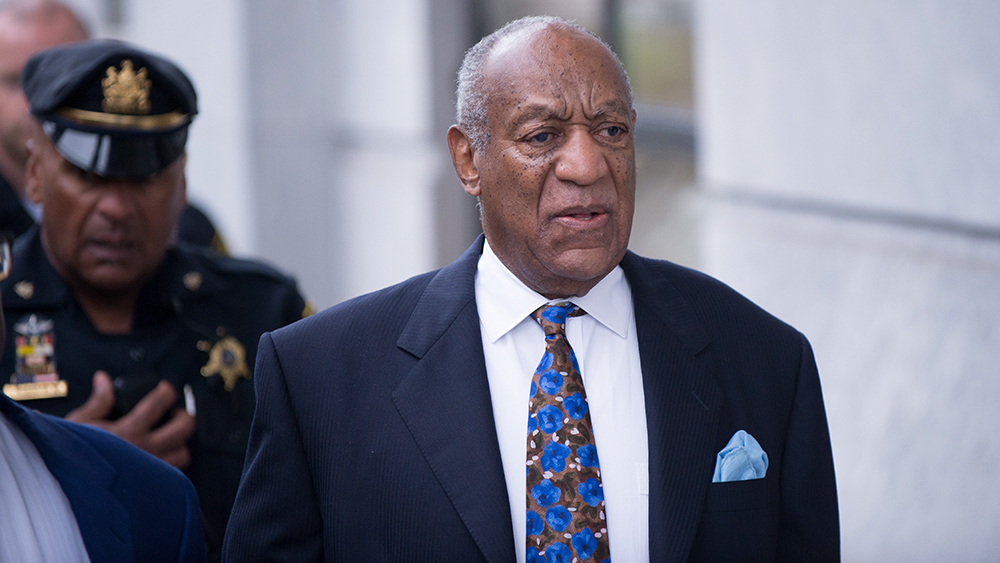 The jury in Bill Cosby’s civil trial in nearly reached a verdict on Friday afternoon, but will instead have to start their deliberations over again on Monday morning.

The unusual twist came at the end of the second day of deliberations in Santa Monica Superior Court. The plaintiff, Judy Huth, has sued Cosby for allegedly molesting her at the Playboy Mansion when she was 16, in 1975.

The jurors were asked to answer nine questions, including whether Cosby sexually molested Huth, whether she was under 18, whether Cosby had reason to know that, and how much damages she should be awarded.

At the end of the day on Friday, the jury informed Judge Craig Karlan that they had reached a verdict on eight of the questions. The only unanswered question pertained to whether Cosby acted with “malice, oppression or fraud” — which would trigger punitive damages if they answered yes.

Karlan at first indicated that he would accept a partial verdict, but then changed his mind after a bailiff informed him that the court building would close for the day within a few minutes. Karlan said he did not have sufficient time to take the verdict, and did not want to incur Sheriff’s Department overtime.

Instead, the jurors will resume deliberations on Monday morning. But they will have to start their discussions all over again — potentially wiping out the verdicts on the eight questions — because the foreperson had to be excused due to a pre-planned trip. An alternate juror will be seated on Monday to take her place.

Huth’s attorneys wanted the judge to take the partial verdict, as it appeared from the way the verdict form is structured that it would go in their favor.

Cosby’s attorney, Jennifer Bonjean, objected to that, saying that the same 12 jurors should decide all of the issues in the case. The judge did not agree, but in the end, the defense got its preference because of the clock.

Nine of the 12 jurors must agree to reach a verdict on each issue.

Earlier in the day, Karlan denied Bonjean’s motion for a mistrial. Bonjean alleged that Lili Bernard, an accuser in a separate Cosby civil case, was seen walking with one of the jurors during a break. She argued that Bernard appeared to be engaged in jury tampering. Bernard and the juror each denied any improper conversation, and the judge rejected the request.

The jurors also asked 10 questions of the judge, seeking definitions of various terms on the verdict form. At one point, they indicated they were having difficulty agreeing on an amount of da