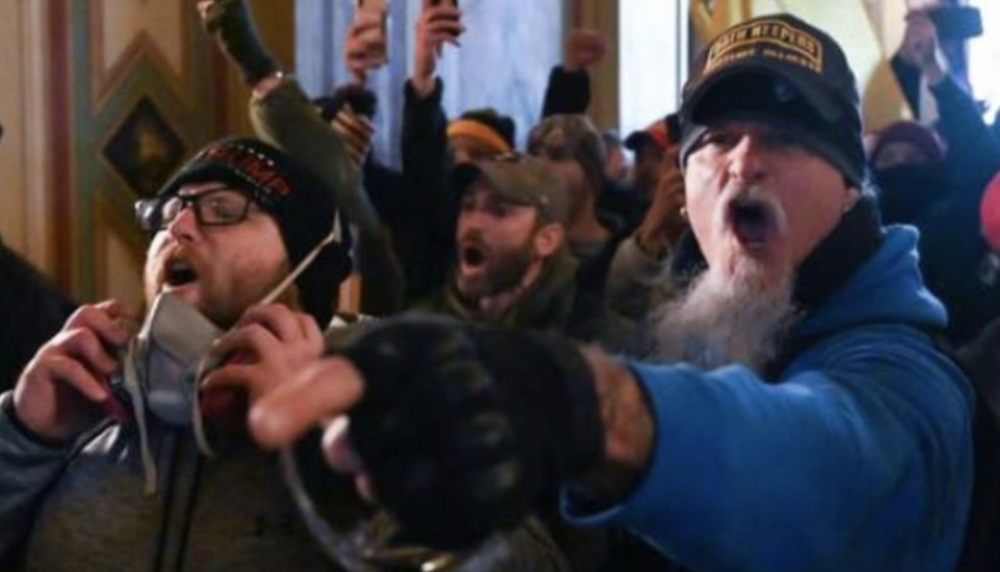 Guitarist Jon Schaffer, a founding member of the metal band Iced Earth, has been taken into custody in his home state of Indiana after making “wanted” lists as a result of his widely seen participation in pro-Trump forces’ siege of the U.S. Capitol.

News outlets including the Indianapolis Star have reported that Schaffer turned himself in to the FBI Sunday afternoon, 11 days after the deadly insurrection in Washington, D.C.

Schaffer’s notoriety in the metal community and an unusually long, white goatee got him singled out quickly in the wake of the invasion as a man seen in photos screaming inside the Capitol building after its barriers were breached.

Among the charges, according to Indianapolis FBI spokeswoman Chris Bavender, are that Schaffer “engag(ed) in an act of physical violence in a Capitol building.” The FBI rep additionally told the Star that the musician was “allegedly with a group of rioters who used bear spray against Capitol police.”

The full list of six charges on which Schaffer is being held:

Why such an easily identifiable figure hadn’t been arrested earlier was a mystery to many. On Jan. 14, the website Metalsucks.net wrote, “I can’t think of a sensitive way to say this, so I’ll just say it insensitively: Why the fuck hasn’t Iced Earth’s Jon Schaffer been arrested yet?!? The Indiana native was clearly visible in a widely-circulated photo of the pro-Trump mob that stormed the Capitol last week, whereupon he was identified by pretty much every metal media outlet in the world.”

Schaffer was seen wearing an “Oath Keepers Lifetime Member” ballcap, signaling his support for a militia that the Southern Poverty Law Center says “claims tens of thousands of present and former law enforcement officials and military veterans as members (and) is one of the largest radical antigovernment groups in the U.S. today.” Despite Schaffer’s claim of membership, he is not known to have been involved in law enforcement or the military.

In past performances by Iced Earth, Schaffer has worn a Confederate flag bandana.

In November, Schaffer was interviewed by the German newspaper Die Welt as he took part in a Trump rally. He told the interviewer that “if somebody wants to bring violence, I think there’s a lot of us here that are ready for it. We don’t want that, but if they bring it, we’re gonna respond to that — trust me.”

Additionally, Schaffer said in the video, “We’re not going to merge into some globalist, communist system, it will not happen. There will be a lot of bloodshed if it comes down to that, trust me. The American people will not go for that bullshit once they understand what’s actually happening. So that’s where we’re at. Nobody wants this, but they’re pushing us to a point where we have no choice.”

In 2020, Schaffer — who has been a guest on Alex Jones’ conspiracy theory-laden show — did an interview with Metalsucks’ “QuarantineCast” in which he proclaimed that COVID-19 is “a psychological warfare campaign on the people more than it is a serious pandemic,” and warned against “the global elite families that run the federal reserve banking system.” He described Dr. Anthony Fauci and Bill Gates as “fucking criminals, and there is a plan, and it’s all to vaccinate everybody, and look out. Because this is a death cult that’s running this whole situation.”

Iced Earth has released 12 original studio albums since 1990, the last of which, 2017’s “Incorruptible,” represented the group’s chart peak to date. Schaffer produced the album and wrote or co-wrote all of its songs, which included titles like “Seven Headed Whore,” “Great Heathen Army” and “Clear the Way (December 13, 1862).” The last of these songs described the Battle of Fredericksburg in the Civil War. “The Confederates had the higher ground and the dominant position, so the Union Irish Brigade just got slaughtered,” he said in a 2017 interview with Metal Hammer, describing the song celebrating the Confederate victory as “somber, but it has a certain glory to it all.”

Four other members of Iced Earth have released a statement disavowing the siege. “We absolutely DO NOT condone nor do we support riots or the acts of violence that the rioters were involved in on January 6th at the US Capitol building,” the other members wrote in their statement. “We hope that all those involved that day are brought to justice to be investigated and answer for their actions. With broken hearts we are sending our love and compassion to everyone who has felt pain from the events on January 6th. We are deeply saddened and our hearts go out to the families of the lives lost that day. There are really no proper words to console. Just know we are with you in your shock, grief and pain. Much love to you all. Stu, Luke, Jake, Brent.”