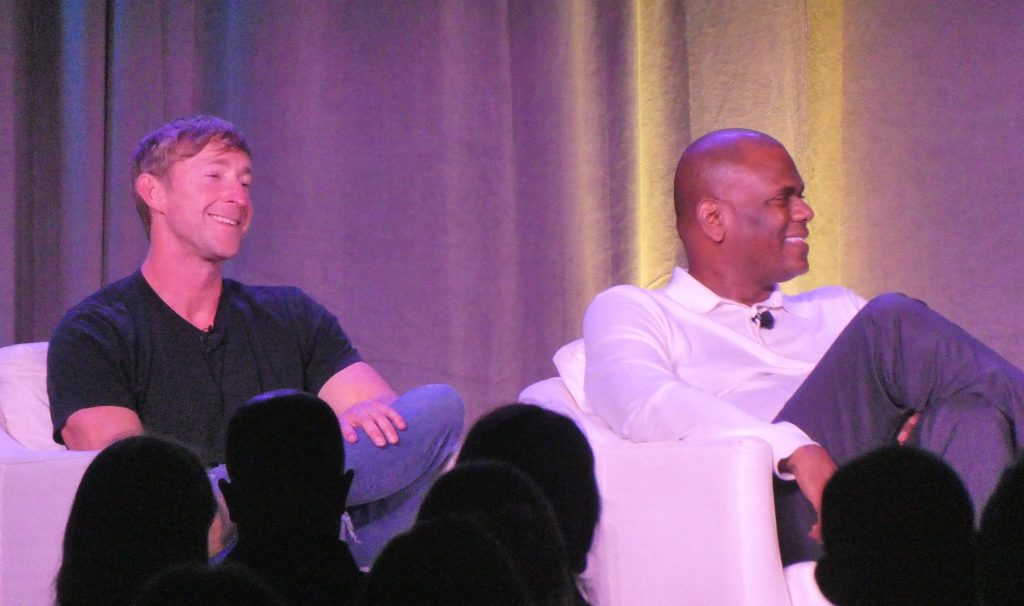 Music publishing, a part of the industry that rarely raises its hand to be its hottest or most controversial subject, has recently been an uncharacteristic source of news headlines again and again, due to a seeming gold rush that has major artist-songwriters selling off their catalogs for huge figures. As the chairman-CEO of Sony Music Publishing, Jon Platt naturally has a few thoughts about this crest of cashing in. And they’re mixed, even if he’s not about to wax gloomy about writers getting their due.

“There’s no one particular answer to this —  no one-size-fits-all answer, to be honest with you,” Platt said during a keynote Q&A at the annual Music Biz conference in Nashville Wednesday. “You have legacy songwriters who want to secure their future; you have newer songwriters who think they’re gonna write another catalog tomorrow, so they’re going to sell this one — and everything in-between. … Listen, any time that people think there’s value in the music business, that’s a good thing. So I am excited about that piece of it. But I’m a little torn on some of it.”

Platt continued, “The legacy songwriters, I think it’s fantastic for you to have the opportunity to make a choice of what you want to do. For (younger) songwriters, I think you should give it long thought before you do it. No one is buying catalogs to lose money, and it’s a transaction, and you have to be comfortable with that. I think it’s too early to know if it’s short-term or long-term, good or bad… But it is great to see songwriters valued.”

In other words: Let the sub-Springsteenian seller, beware.

The primary grist of Platt’s Q&A with Music Business Assn. president Portia Saban had less to do with big deals — although he used the occasion to announce Sony Publishing’s own big deal with country songwriting titan Ashley Gorley — than about an equally topical but non-headline-making subject: diversity in executive suites.

Platt paused, then affirmed that she was right about the higher possible superlative she’d raised. “So, I am the highest-ranking Black executive,” he said, to applause. “Not just in the music industry, but in the entertainment industry. … You know, I’m a Black man ‚ I’ve had experiences. Jody Gerson [his one-time boss, who holds a similar role at Universal Music Publishing] is a woman; she’s had experiences. And we’d be foolish to turn a blind eye to those experiences. But more than that, it’s just common sense… We’re in is a diverse industry, but from the talent perspective. … I see no reason why it should’t be a diverse industry inside the companies.”

Platt suggested that companies in the business need to commit not just to hiring those who’ve traditionally stood outside the executive ranks but pay them at the same levels doled out to the un-diverse old guard.

“I started at Sony April 1, 2019,” Platt said. “Literally the first day, or probably before the first day, I sat with my head of HR and basically was like, ‘We’ve got to change things. I want our company to represent what the industry really is, what the music is that we represent, and we have to be intentional about it. Something that my leadership team hears me say often is: We’ve got to be comfortable being uncomfortable. … You know, approaching the challenges of DEI, it’s not a social media post. It’s not lip service. … There’s a lot of people that are committed to this until they have to give up something, and share something.

“From a leadership level, you’ve got to start tying that to compensation. People are way too smart now to just listen to us speak. They’re too smart to hear me speak about it. They want to see what we’re going to do. I often say, people see better than they hear. And they want to start seeing action.”

Saban asked Platt about his alliance with the songwriters’ activist organization the 100 Percenters, which has organized protests against what it considers minuscule streaming royalties. The Sony CEO said he’d actually gotten off to a rocky start with the highly outspoken founder of that organization, songwriter Tiffany Red.

“Tiffany Red is a great songwriter advocate,” he said, “and there’s others as well. We partner with multiple organizations and lean into that, heavily. But 100 Percenters… it started from social media posts and kind of going at publishers and going at the industry and so on and so forth. And she mentioned my name in a post and I’m like, ‘I don’t even know her!’ And anyone who knows me knows I’m not whatever it was that was being said that day. Sometimes  — not even sometimes — I don’t run away from the fire. I run into the fire. My head of comm is kind of like, ‘Nooo! Come back!’ And I said, ‘I‘m going to talk to her,’ and we spoke, and I was like, ‘I’ll meet with your board, but we can’t communicate like this. I don’t communicate that way.’

“So Tiffany and her board came to L.A., and we had a very impactful conversation for all of us. It started a fantastic relationship, and we work on a lot of exciting things together. But, you know, when my son was a freshman in high school, he played basketball and we went to a parent meeting and the coach said something that made so much sense, I even wrote it my phone. He told the parents, ‘I have the fault of being an over-communicator. Because I’ve learned that in the absence of communication, negativity [goes unchecked].’ … With Tiffany, I could have been ‘I don’t agree with that and she doesn’t know me and that’s not true.’ And I chose to have a conversation about it, and it was better for both of us, and now that becomes better for songwriters as well.

Platt affirmed that Saban was correct in saying Sony Publishing was teaming with 100 Percenters to give grants to songwriters, but added, “Even that is something that we had done already before… We had done things for the NSAI and other groups as well. I could go down the list of a lot of things that we’ve done, financially… Even the other songwriter groups that we partner with, we didn’t put out the press release. They did. And we support them because that’s meaningful to them, for what they’re trying to do… We just want to get to the work.”

Noting the presence of a lot of aspirants in the Music Biz audience, Platt went into unusual detail about his long rise in the business — including 17 years spent at EMI Music Publishing before he was brought on to succeed Martin Bandier at Sony — including some moments that were humbling, in the truest, most old-fashioned sense of the word. “And I think I was probably a senior VP of A&R at that time, and I was growing rapidly – I was a creative manager, now I was a director, a senior director, VP, senior VP, EVP — these things were happening super fast. And I wanted to do more, and I asked someone that I looked up to: How do I run a company? And they told me I should listen to different types of music. I remember being so offended by that. I was like, huh? I said, ‘Wow, I thought that was my guy.’ … I didn’t know the answer, but I knew that’s not the answer.”

Eventually he ended up traveling to Boston and spending considerable money to work with an executive coach, something he considers an invaluable investment in retrospect. “We go in this little conference room… and he say, ‘So why are you here?’ and I say to him, ‘I want to run this company one day’ — I was working for EMI at the time. And he looks at me dead in the eye and says, ‘It will never happen.’ I thought he was joking… He was like, ‘Do you know what running a company entails?’ … He said running a company is about management but more than that it’s about leadership. And he’s saying words to me that I never really even digested before. He says, ‘How many people report to you? How do you think you can run a company if you don’t even manage anybody? You don’t even matter to anyone.’

“Finally, he said, ‘Let me tell you what’s happened.  I researched you. You’re very successful, you’re on this amazing career path. … but you’re still doing the same thing. You’re a senior VP, but I will bet you don’t do anything different in your role today than you did the day you started at the company…. You have success, you’ve made money for the company, and because of that, they have to pay you more. And to pay you more, they keep giving you these titles. But you’re still in the same place.’ And we had a more personal conversation and he started giving me advice on how to break that mold. (But) I went back to my room and I was broken, to be honest with you. Imagine someone at the height of their career, of what their role is, and then basically being told by someone, ‘For what you want to be, you’re at the bottom.’

“The way I tell it, he pulled me into pieces, and then he put me back together with the pieces that I needed.” After a few more days of intensive work, he went back to the airport, and made his usual stop at the newsstand. “I’m seeing all these books on leadership… they’d always been there, but now I was like, ‘This one, this one, this one!’ But I’d never paid attention to those books. I was [buying] XXL (magazine) and The Source,” he laughed.

Platt was on his way out of A&R and toward a higher executive calling, but he had advice for those at the conference who may be on the other end, looking at an A&R job as an impossible reach.

“People say, ‘I want to do A&R, I want do this, I want to do whatever.’ I’m like, do it. Just do it! You don’t necessarily have to have the role to do the role. Do it. But some people are like, ‘I have to be known as that to do it.’ That’s not really how it works in real life.”

Near the conclusion of the keynote, Platt had a surprise: the announcement that Sony Music Publishing had signed one of the most successful songwriters in country music. That was Ashley Gorley, a man who is an almost predictable shoo-in to be ASCAP’s Nashville songwriter of the year each year, with credits on a record 59 No. 1 country singles with artists like Luke Bryan, Chris Stapleton, Carrie Underwood, Thomas Rhett, Blake Shelton and many others.

That it hadn’t happened earlier was not for not wanting it. “We tried to do this a few times,” Gorman admitted. The songwriter said he and Platt “talk about our kids playing basketball, and made a connection outside of music. I think it strengthened our relationship.”

Platt talked about a relationship that went back some years, at least via DMs. “The thing is, it’s not the norm when you have a No. 1 songwriter that’s helping other songwriters get No. 1s as well,” he said, referring to Gorley’s own publishing company, where he takes on a very hands-on role with young writers. “Tape Room Music is a real compan