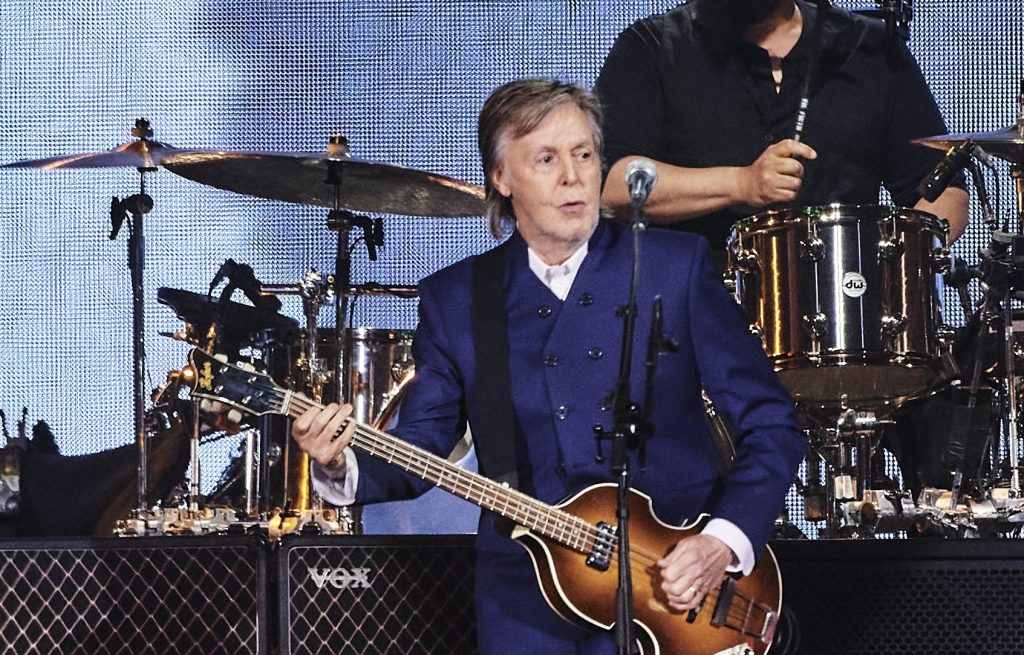 Paul McCartney welcomed Bruce Springsteen on Thursday night at Met Life Stadium in East Rutherford, N.J., for a performance of the Boss’ anthem “Glory Days” and the early Beatles tune “I Wanna Be Your Man.”

Springsteen appeared 29 songs into the show, the last on the North American leg of McCartney’s “Got Back” tour. He previously performed “I Saw Her Standing There” with McCartney at the latter’s Aug. 5, 2013, show at London’s Hyde Park.

Later, Jon Bon Jovi came onstage with a handful of balloons and gave a quick “Happy Birthday” serenade to McCartney, who turns 80 on Saturday.

The Boss returned to play guitar at the end of the show-closing “Abbey Road” medley, trading solos with McCartney’s bandmates. From here, McCartney headlines the U.K.’s Glastonbury Festival on June 24.

Watch a fan video of the performance below.

A host of New Jersey’s most celebrated musical talents — including Bruce Springsteen, Jon Bon Jovi, Charlie Puth, Halsey, SZA and Fountains of Wayne, plus one adopted son from New York, Tony Bennett — came together Wednesday for “Jersey 4 Jersey,” a benefit webcast to raise funds to fight the medical, social and economic impact of the coronavirus on local communities

“Welcome to Jersey 4 Jersey,” Springsteen said in opening the show, organized by the recently-launched New Jersey Pandemic Relief Fund (NJPRF). “We are here tonight dedicated to our healthcare workers and all of those who lost loved ones who are suffering and dying with this terrible disease right here, right now, in our beloved state.”

Dressed in a blue shirt and accompanied by wife and E Street Band member Patti Scialfa, the Freehold native delivered, for the first of his two numbers on the telecast, an inspiring rendition of “Land of Hopes and Dreams.” Springsteen’s voice is one people look to to feel better in times of uncertainty, and the choice of a song with the lyrics “Leave behind your sorrows / Let this day be the last / Tomorrow there’ll be sunshine / And all this darkness past” was a perfect way to begin the show on a hopeful note, much as he did 19 years ago when he performed “My City of Ruins” at the 9/11 “A Tribute to Heroes” telethon.

Also on hand to inspire was Bon Jovi, who recently canceled his band’s summer tour, rather than choose to postpone indefinitely, so fans can get full refunds. The Sayreville native took a moment to praise “everyone on the front lines” fighting the pandemic and debut a beautiful new song meant to capture this moment in time, “Do What You Can.” A particularly poignant line addresses the youth affected, as Bon Jovi sang “they had to cancel graduation, it’s not fair to Skype the prom.” But he flashed a smile after delivering the assuring closing line, “We’re gonna get through this together until I see you once again.”

“Located between the metropolis of Manhattan and Philadelphia is the state of New Jersey… so we’ll say it’s a state of mind. Others will say it’s a mythical place. Well, it’s my home, the place where I was born and I was raised,” Bon Jovi said. “Tonight we are here to entertain you; we’re all looking for that virtual hug.”

The telethon gave special nods to New Jerseyans working hard in hospitals, grocery store employees, bus drivers for seniors and teachers working on remote learning lessons for students. Governor Phil Murphy and first lady Tammy Murphy made sure they got their proper due. “There is no question New Jersey has been hit really, really hard,” said Murphy, who took a moment to recognize heroic healthcare workers, first responders, and others “out there every single day” fighting the virus. “We are New Jersey and we will all get through this together as one extraordinary family as we always have before,” he said.

Actress and “View” host Whoopi Goldberg echoed that sentiment, praising heroes working to give the ill a “last goodbye,” while comedian Chris Rock encouraged the importance of social distancing.

It wasn’t all sad, as Jon Stewart, taping from what appeared to be a playroom, joked that New Jersey was the “land of Jersey Freeze (a popular ice cream parlor and restaurant in Freehold) and a good haircut.”

“I have been in quarantine for 30 days. I look like Doc Brown in ‘Back to the Future,’” he said, adding that he is”always proud of Jersey, but I am never more proud of this state than when our backs are against the wall.”

Danny DeVito lightened the mood with a story about riding his bike through Asbury Park past the swans and up to the casino towards the ocean — “What keeps me sane is thinking about Asbury,” he said — and jumping onto the beach when the “old” guy wasn’t looking.

Chelsea Handler, of Livingston, NJ, donned a Whitney Houston shirt and cracked that she was self-medicating in California with cannabis. On a more empathetic level, she said she’d had it after seeing images of workers without the protective gear, masks and equipment they need, but expressed pride that her home state is doing something about it. She also had an epiphany and demonstrated for those without a mask how to fashion one. “We have had a lot of great inventors in New Jersey. Edison created the light bulb. Einstein is from New Jersey, I didn’t find that out until this morning,” she said as she unveiled her latest invention, a face mask created from a bra.

New York Giants running back Saquon Barkley took a moment to clarify that although the team is billed as “New York,” “we play in New Jersey… New Jersey is no joke… we are tough, and we are strong, and right now we need all that strength, just like in football.”

Barkley was on hand to introduce “Ashley Frangipane of Edison, better known as Halsey.” Accompanying herself on guitar, the pop singer chose “Beautiful Stranger” for the occasion, a song that contains the lyric “dancing in my living room.” The pop star was joined by several other musicians, including a violinist, performing in socially distant locations for an effectively beautiful piece.

SZA, filmed in black and white and comfortably seated on her couch, referred to herself by her first name, “Solana from Maplewood, New Jersey,” before delivering a soulful and genuine message of love to the younger generation w