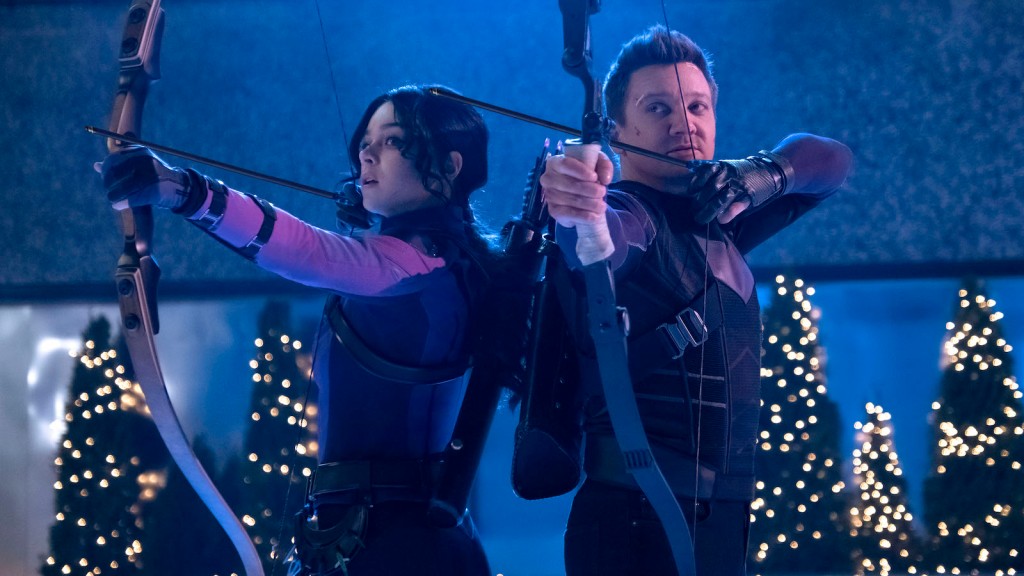 Hawkeye isn’t as buff as Captain America, as obnoxiously sexy as Iron Man, as beautiful and mysterious as Natasha Romanoff, as boyishly charming as Spider-Man, as brawny and brainy as Hulk or a himbo god like Thor — he’s just a regular dude with Jeremy Renner’s rugged looks and above-average archer skills with zero superpowers. Many were skeptical at first of a standalone “Hawkeye” series at first, but the Disney Plus show proved critics and audiences wrong.

Currently boasting a 92% critics score on Rotten Tomatoes and a 90% score with audiences, it is evident that Hawkeye won over less-enthused Avengers fans with his salt-of-the-earth humility, his own tortured, morally questionable grieving process, his unfailing determination to spend Christmas with his family and his new need for hearing aids. Rhys Thomas, who directed the first two episodes and the grand finale, says that’s the point of Clint Barton’s appeal: he’s a normal guy, with normal setbacks and desires, contending with a world slightly more abnormal than our own.

Starring Hailee Steinfeld as Kate Bishop, Hawkeye’s wide-eyed, early-20s protégé, and featuring memorable performances from Vera Farmiga as Eleanor Bishop, Alaqua Cox as Echo/Maya Lopez, Tony Dalton as Jack Duquesne, Florence Pugh as Yelena Belova and Vincent D’Onofrio as Kingpin — reprising his role from Netflix’s ‘Daredevil’ series — the “Hawkeye” cast was stacked with robust characters who will hopefully appear in many more MCU shows and films to come. As such, Thomas was presented with a challenge that seems to be unique to MCU directors — how to flesh out characters enough to make them interesting for the series by itself, while also not getting too carried away with canonical comic book storylines or jumpstarting original concepts to come in future projects.

Variety chatted with the Welsh director on all things “Hawkeye,” including making Christmas the backdrop to its crime-stopping capers and superhero-in-training antics.

Did you know from the start that you were going to bring Kingpin from Netflix’s “Daredevil” into the show, and just a week later Daredevil himself popped up in “Spider-Man: No Way Home”?

The Kingpin of it all was not on the cusp when I started the show, but I feel like his presence was never far. Like, we were always circling this other “big bad guy,” but there was a moment when a Marvel executive came over and said, “You know, this is what we’re gonna do about that.” As far as a larger plan and a crossover with “Spider-Man: No Way Home,” I did not know that they would do that. They do a wonderful job at Marvel of keeping everybody quite siloed, and I think they do this for your own security. People seem to sort of assume that there is this room where everything is all mapped out, but, no, they keep you kind of focused on your own show and only give you the information that they feel they need to give.

What are some of the challenges as a Marvel show director that come with keeping MCU continuity in mind? You’ve got characters like Echo and Kate Bishop, who are going to be in future projects, and Yelena, who was introduced in “Black Widow,” and on top of all of that, there’s the multiverse to consider

The wonderful team at Marvel helps keep you honest on that front. I learned early on that the best thing I could do about that was not to worry too much about it and just try to keep doing what I could with Kate, Clint, Yelena and all of those characters to do them justice on their own show and to treat it as such. These events are only happening for them at this moment at Christmas time. Luckily, I could keep that in focus, and when the legacy stuff or the multiverse stuff needed to come in you always had someone at Marvel to help out or to at least keep an eye on it. It’s been a weird feeling stepping into the MCU as someone that had been watching like every other fan. So, as a director, when you step onto a set and you’ve got Jeremy Renner dressed in a Hawkeye costume that you’ve been helping design, and you’re introducing new characters like Echo and Kate Bishop and Jack Duquesne, and you also have to fit this in all around the holidays, it makes it all so surreal. And I realized that, yes, we were filming at the Rockefeller Center, but it was the Rockefeller Center in the MCU. I think Kevin Feige says it best that “The MCU is like the world just outside your window.” As I was directing, I realized that you’re supposed to treat it as slightly different parallel realities from the one you are in right now, and you have to go along with it and follow its rules.

What were some tells that you slipped in throughout the series that Eleanor Bishop would turn out to be a villain?

It’s always a difficult job when you’re trying to bury the lead and when you don’t want audiences to get ahead of you because that will spoil things, but you also don’t want it to be like a soap opera where the bad guy just kind of steps out from the shadows and there was nothing to suggest it. Part of what we tried to do was, rather than seeking any clues necessarily, we really thought about defining her character in a way that it wasn’t a total surprise — from the ways that she spoke to Kate, to the argument that she has with Armand Duquesne in the first episode, which Kate misunderstands because her presumption is that her mother couldn’t possibly do anything wrong. That’s what Kate takes and runs with and obviously that leads her to suspect Jack Duquesne, which again is because she is clouded by her own prejudice towards him and because of his romantic involvement with her mother. So, it was obviously always sort of there. We also wanted to make people understand that, ultimately, Eleanor is a mother that has raised Kate by herself and that her actions come from this place of protection and care for her daughter, and that’s what we wanted to convey more. Her actions are slightly misguided. In the finale, Kate has come full circle and realizes her own blindness and Eleanor’s sort of righteousness. And it comes from this more emotional place of, “I’m your mother, and this is what I have to do, and you need to understand that, even if I go about it incorrectly.”

We have two prominent characters with either total deafness or partial hearing impairment — why was it important to show how one of the Avengers ends up having an injury that leaves him with a chronic condition? How did you make sure that came across appropriately on screen?

Part of the thing that makes Clint Barton so singular and so charming and appealing is that he is a human. He does not have superpowers — he can’t just bounce off of a car and get back up easily. When he smashes through that window in the first Avengers movie, he ends up suffering a lot of pain. We talked about this from early on that we needed to keep reality alive, and that means showing that humans do get hurt and beaten and broken. All of his crime fighting took its toll. In some of the comics, he does have the impairment, and it is also a nice way of connecting Echo/Maya, who is deaf in the comic books, to him. It is their unifier. It also gave Clint an in to communicate with her on a different level.

How did you make sure that you kept the Christmas cheer and levity in the series while pairing it with the violence that is intrinsic in the superhero genre?

I feel like setting it as the backdrop of violence made it all seem a bit more real. Bringing the climax of the season to the Rockefeller Center and showing the famous Christmas tree felt like the perfect venue for a showdown outside of the Bishops’ security firm Christmas party. And it all works because the events of the show are set in those last days before Christmas, so you knew that Clint had a deadline of getting home by then and the audience was always aware that he was heading towards this ultimate Christmas goal. The Rockefeller Center was the perfect way to bring everyone and everything together, balancing the merriness of Christmas and the imagery with the music and the strings of light and all of its positive associations with the fight sequences.

What was the collaboration process like in the writers room for “Rogers the Musical,” writing the songs and deciding how you were going to stage it?

The process of developing the musical sort of started right after we started principal photography. I mean, there was a piece in the script already where we knew we were going to be putting the musical in, but in terms of how it was going to be or what was going to happen or what the music was going to sound like, that all was finalized once we were in the production process. I managed to recruit Marc Shaiman and Scott Whitman to help create the song and the lyrics, and it all started quite casually between the three of us and some very amusing text exchanges. It was kept quite small for a little while, and it was kind of like a fun background project that was happening while I was shooting the rest of the show. So the musical was sort of slowly layered up and we shot it late in principal photography — it was a day of levity for the crew. We’d all been shooting that Rockefeller Center sequence and all of this kind of action stuff at nighttime, and then we arrived in the theater to do something fun at like 11 p.m. that same day.