Amazon dodged a coronavirus bullet in its second quarter, posting big gains in sales and operating income as shoppers around the world stayed home and did the bulk of their shopping online.

The online retail giant, which operates the Amazon Music streaming platform and is one of a small handful of tech companies in the “trillion-dollar club”, reported net sales of $88.9 billion in the quarter ending June 30, 2020, beating analysts’ expectations with a whopping 40 per cent improvement on the same period last year.

Also during the period, operating income almost doubled to $5.8 billion, up from $3.1 billion in second quarter of the previous year.

Revenue from subscription services ballooned to $6 billion, well advanced from the $4.6 billion reported in the corresponding period in 2019.

“This was another highly unusual quarter,” said Jeff Bezos, Amazon founder and CEO in a statement issued to investors, “and I couldn’t be more proud of and grateful to our employees around the globe.”

Amazon, Bezos pointed out, spent over $4 billion on incremental COVID-19-related costs in the quarter to “help keep employees safe and deliver products” during the pandemic, a sum that was expected to soak-up its profits.

If the results were strong and steady, the same can’t be said of the performance of Bezos who, along with the CEOs of Apple, Facebook and Google parent Alphabet, was grilled earlier this week by lawmakers on Capitol Hill.

According to The Hollywood Reporter’s coverage of the House of Representatives antitrust subcommittee, Bezos’ testimony came across as defensive when he was pushed on reports that Amazon had used data from third party sellers in its marketplace to launch competing products. And he downright struggled to respond to other probing questions.

Look ahead, Amazon is forecasting third quarter net sales in the region of $87 billion to $93 billion, though its “results are inherently unpredictable” due to the nature of the pandemic and myriad issues affecting the retail space.

Operating income is expected to be between 2.0 billion and $5.0 billion for the next quarter. 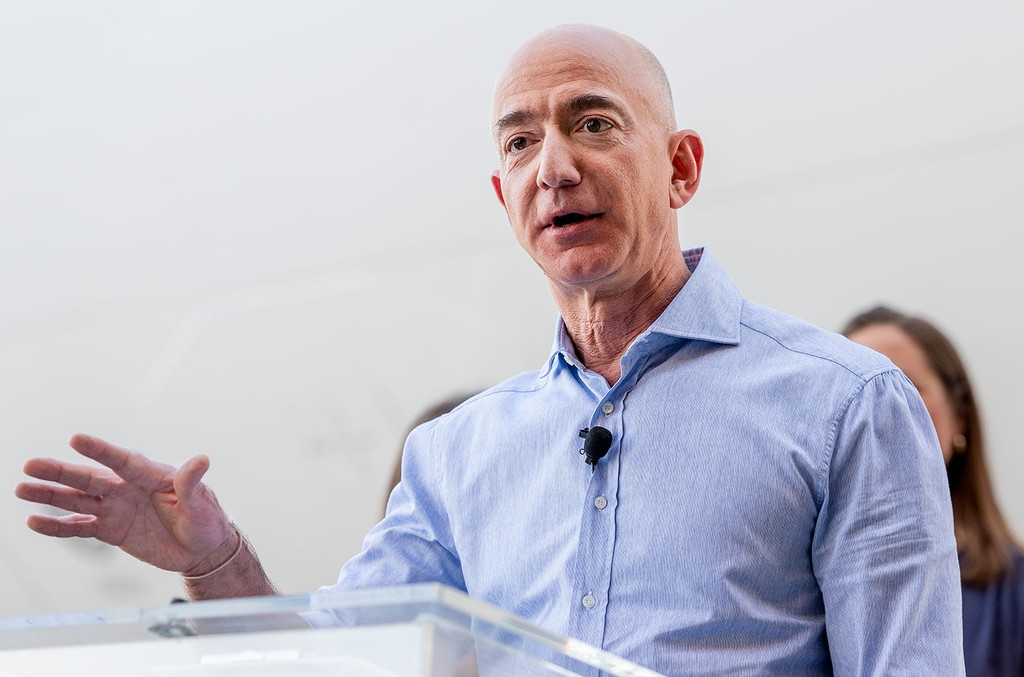 Amazon CEO Jeff Bezos might be the richest person in the world, but he’s also a rookie. Until Wednesday, he had never before been grilled by lawmakers on Capitol Hill. That changed today when top executives at the nation’s leading technology companies gathered — at least virtually — for testimony before a House of Representatives antitrust subcommittee. There, Bezos faced blistering questions about whether the e-commerce giant has abused its market power.

“A lot of people want to know when the HBO Max app will be available on your Fire devices,” Congressman Jamie Raskin (D-MD) told Bezos. “I understand negotiations are ongoing but your company is not only asking for financial terms but also for content from Warner Media…. Is it fair to use your gatekeeper status role to promote your position as a competitor in the video streaming market with respect to content?”

The question to Bezos came amidst a hearing that got quite heated at times. Mark Zuckerberg took repeated queries about Facebook’s acquisitions over the years and was presented with emails that lawmakers touted as evidence of the social media giant’s predatory ways. Google CEO Sundar Pichai faced an examination over a range of practices from “stealing content to build [its’] own businesses” (the ongoing suit brought by lyric site Genius was mentioned) to whether Google used “surveillance over web traffic to identify competitive threats.” And Republicans on the antitrust subcommittee were particularly eager to cross-examine the executives over their supposed censorship of conservative viewpoints.

As for Bezos, it took the 56-year-old tech titan nearly two hours to get his first question, an odd delay reportedly because of internet connection troubles. But once the queries finally arrived, Bezos found himself on the defensive over reports that Amazon had used data from third party sellers in its marketplace to launch competing products.

“What I can tell you is that we have a policy against using seller specific data to aid our private label business,” said Bezos. “But I can’t guarantee you that that policy has never been violated.”

Other lawmakers such as Lucy McBath (D-GA) pounced on that remark and then got Bezos to admit that Amazon had at least used aggregate data from third parties for their own competitive products. McBath characterized this as a “loophole” in the company’s policy. The lawmaker also played a recording from one small businesswoman — a textbook seller — who claimed not being able to sell a single book over ten months thanks to Amazon’s practices. This woman couldn’t get an explanation.

Bezos struggled for a response.

“I’m surprised by that,” he said. “It’s not the systematic approach we take, I can assure you. I don’t understand what’s going on in that anecdote because we would love for third party sellers to sell books.”

Eventually, the conversation moved to the launch of HBO Max, and Bezos was confronted with how Amazon has been using its position as both a competitor and gatekeeper — a topic that figures to become more and more significant in the streaming economy.

Just a few days ago, on an earnings call, AT&T CEO John Stankey addressed the difficulty in striking a deal to get the nascent HBO Max on Fire. “Unfortunately, Amazon has taken an approach of treating HBO Max and its customers differently than how they’ve chosen to treat other services and their customers,” said Stankey (never mind the lack of imagination the AT&T executive once showed during the Time Warner merger trial).

“I predict our companies will come to an agreement,” said Bezos today.

“is it ok to negotiate not just for financial terms to be a part of your Fire unit but also to also try to extract in that negotiation content from them?” pursued Raskin.

Bezos said he was ignorant about the details but also characterized these ongoing negotiations as “normal” as well as a “fundamental” way that business works.

“Do you see that to observers that would look like a structural conflict of interest?” asked Raskin. “You’re using your control over access to people’s living rooms, essentially, you’re using that in order to obtain leverage in terms of getting creative content you wouldn’t otherwise. You are essentially converting power in one domain to another where it doesn’t belong.”

Amazon has turned one of the buildings in its Seattle headquarters into a permanent homeless shelter.

Since 2017, the company had plans to create a homeless shelter for Mary’s Place Family Center on its Seattle campus. From 2016 to 2018, the shelter had operated out of a vacant Amazon building, but now the new location in the Regrade neighborhood of Seattle has opened.

The brand new facility has eight floors and 63,000 square feet of usable space, which is a 40 percent increase from the previous building’s capacity. The shelter has an industrial kitchen for residents to use, an on-site health clinic, office space and recreational areas where kids can play. Mary’s Place can shelter up to 1,000 people per year and 200 family members each night.

Recently however, Amazon CEO Jeff Bezos has faced criticism for his growing wealth while warehouse employees face unfavorable work conditions during the coronavirus pandemic. At least five Amazon workers have died from COVID-19, according to various media reports.