‘His Dark Materials’: Lin-Manuel Miranda Breaks Down the Season 2 Finale

SPOILER ALERT: Do not read if you have not yet watched the second season finale of “His Dark Materials.”

Fans of Philip Pullman’s “His Dark Materials” trilogy, Lin-Manuel Miranda included, have known all along that Lee Scoresby was sailing his balloon towards certain death. But that didn’t make his and Hester’s (Cristela Alonzo) demise any less difficult to watch.

In Monday night’s finale, Lee and his faithful dæmon went down all guns blazing under a hail of fire from Magisterium troops, giving Jopari (Andrew Scott) just enough time to find the bearer of the knife and pass on his crucial message.

With Lyra (Dafne Keen) kidnapped, Will (Amir Wilson) resolved to rescue her, and Lord Asriel (James McAvoy) gathering angels on his side for the coming war, Miranda says the season-ender should leave viewers reaching for the tissues, but that it also provides the perfect set up for an even more ambitious closing chapter.

Here, Miranda talks with Variety about shooting Lee’s death and what might be in store for the third and final season of the HBO drama.

What was your reaction to watching Lee perish in such dramatic fashion?

Can I tell you a secret? I haven’t watched the final episode because it hasn’t aired in the States yet. I did watch the U.K. post all the crying emojis and I did go through it in person. Often you’re shooting out of sequence, you’re shooting at the whims of weather or schedules or locations, especially on an effects heavy show like “His Dark Materials.” But we were able to film the Alamo Gulch sequence sequentially. We started on a Monday and I died on a Friday, so the playing of it was very organic and I think that paid off in terms of the performances. It wasn’t the last thing I filmed, but I’m really grateful that we were able to shoot it in sequence because I just think it helps in terms of where Lee and Hester get to by the end.

Where they get to is a place of ultimate sacrifice for Lyra and her cause, capped off by that heartbreaking line from the books, “Don’t go before I do.”

We always felt an extra responsibility when we are quoting the books directly, because those are lines that have been circled and dog-eared and highlighted and made into fan art by generations of fans at this point, so you really want to honor them and get them right. What I remember the most from “The Subtle Knife” was, “Don’t you go before I do” and “We’re helping Lyra.” It’s this notion that Lee continues to center himself and is able to make the ultimate sacrifice because he reminds himself of a greater cause, which is his love for Lyra and what she has to do for the world.

It’s a poetic ending which completes Lee’s arc in a way?

It’s a beautiful thing. The arc of Lee is someone who is kind of a drifter, who finds a sense of purpose through his love for this kid, who he sees a bit of himself in. This is a really bright kid who has been dealt a bad hand in the parent department, and he’s just going to do everything he can so that she can go forward.

How was it to shoot those final moments opposite your dæmon?

It took me back to the genius of Philip Pullman who created this notion of dæmons. I think it’s two things. One, from a storytelling perspective, it’s brilliant because no one’s ever alone. Even in his final moments, Lee has someone to talk to and there’s a dialogue to be written, and you get a sense of those people. Then the other thing that’s sort of a brilliant side effect of this innovation of Pullman’s conceit that every human has a dæmon that is their soul, is that it’s two deaths we’re mourning: we’re mourning Lee’s death and Hester’s death. That was so overwhelming as I read the U.K. reactions. It was about half, “No, Lee,” crying emoji, and half, “No, Hester,” crying emoji. We’ve gotten to know and love both of them.

And then to make matters worse we see Jopari die in his son’s arms about fives minutes later having been reunited for the first time in years. It’s a triple knockout.

I was not thinking about that during the death scene because from my perspective Jopari goes forward; I was holding down the fort so that he can keep moving. But that’s going to be the part that makes me cry when I finally watch it because I haven’t been witness to that.

You shared videos of yourself and Andrew pretending to be Sam Neill from “Jurassic Park” and then a photo of the two of you napping in a caravan. You two seem to have formed quite the rapport.

We had a wonderful time working together. We’re both theater kids and the fun thing about those sequences was we were way up in the Welsh countryside. Normally, when you’re filming in a studio, you have a base camp, you each go to your separate trailers and you have your own little space. There was no luxury of that when we were filming those final scenes, we are in a rented Winnebago belonging to a local person up there because it’s just too treacherous a journey all the way back to base camp. It was this pink, very flowery Winnebago and we’re like all right, let’s dry off from the mud and have a nap. I also think being that far in on location, you also kind of shut out the outside world, and you really only focus on the work and that’s been one of the great gifts of playing this role and being in Philip Pullman’s world. As my life has gotten more hectic, working on the show is like a holiday for me. I just get to go fly a hot air balloon and learn how to fire a gun and do stunts. It was just the most fun thing to get to live inside this world I loved so much.

It has been confirmed that the show has been renewed for a third and final season, meaning it will have a shot at tackling the final novel on Pullman’s original trilogy, “The Amber Spyglass.” How significant is that?

Well, listen, it’s very significant. I’m really excited that they get to finish telling the story. I’m a huge fan of these books, I remember being so bummed that when they made the movie of “Golden Compass” [and it] wasn’t going to get a sequel. The fact that they get their chance to finish telling Philip Pullman’s story is really exciting. That third book is so ambitious, I can’t wait to see what they do with it.

It’s certainly the wildest of the three, Lee and Hester even make a return of sorts in a different form. Have there been any discussions of that taking place in Season 3?

Nothing has been written in stone or finalized, but I’ve always told them this is enormous fun for me and I serve at the pleasure of Bad Wolf Productions. If they see fit for Lee and Hester to return in corporeal or non-corporeal form, I’ll answer the call. But they just got the green light, so I don’t even know how much exists and is written yet.

[Editor’s Note: This interview was conducted before “His Dark Materials” aired its second season finale Dec. 28 on HBO.] 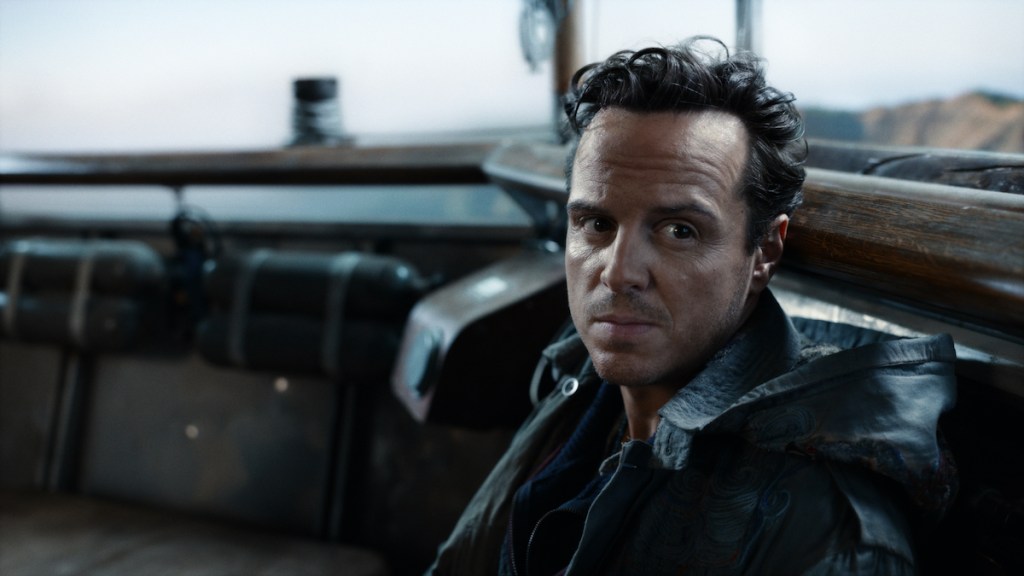 Andrew Scott is swapping his dog collar for a shaman’s cloak.

The “Fleabag” star is the latest addition to the HBO-BBC adaptation of Philip Pullman’s “His Dark Materials” trilogy, playing the mysterious Colonel John Parry. Scott said the spiritual themes of the original novels were a large part of what drew him to the show.

“The books deal with religion in a very strong way and talk about how you can be a very kind, generous, soulful, wonderful person and that doesn’t necessarily have to do with an organized religion,” Scott told Variety during a video interview, which you can watch above. “Goodness is about one’s soul and I think that’s a wonderful thing for children to understand.”

In Season 2, premiering Nov. 16 on HBO, Scott’s character (who comes to be known as the shaman Jopari) spends most of his time in a hot air balloon with Lin-Manuel Miranda’s fiery Texan aeronaut Lee Scoresby. The two actors were delighted to work together for the first time, and Miranda revealed his friends were particularly excited that he was acting alongside the man behind the internet sensation of a hot and priestly variety.

“I’m in the hot air balloon with him and my phone is buzzing from men and women in my life being like, ‘You’re working with [the] hot priest!’ But none of it went to his head and we had a wonderful time together,” said Miranda.

After a dramatic finale which saw Lyra (Dafne Keen), Mrs. Coulter (Ruth Wilson) and Lord Asriel (James McAvoy) have a less-than-friendly family reunion on a blizzard-stricken mountain top, the main characters have largely gone their separate ways at the start of Season 2.

Lyra steps through a portal into another universe called Cittàgazze, where she meets Will (Amir Wilson) who is from the normal human world without dæmons, alethiometers, or any such magic. Keen teased that the two youngsters form a deep bond which helps Lyra “mature so much” in this new batch of episodes.

“In Season 1 she’s vulnerable, but you don’t see that vulnerability as much, and this season she’s much more emotional. She cares for Will when he’s sick and it’s beautiful to see him bring out this side of her you didn’t know was there,” Keen said. “You realize how much damage her parents have done to her, and you see that Will and Lyra make each other better.”

Eventually, Will takes Lyra back to his own world, which allows for a healthy dose of fish-out-of-water comedy.

“Pretending not to know our world was really fun. I got to act surprised at phones and go to the cinema for the first time,” Keen said.

There’s no question that the scope of Season 2, based on the second book in Pullman’s trilogy called “The Subtle Knife,” takes on a whole new dimension (pardon the pun).

Miranda said it brings the spiraling scope he remembers from first reading the trilogy, describing Season 2 as “faithful plus” in terms of how closely it sticks to the book.

“We introduced Will’s storyline within the first season which doesn’t happen in the books. It’s faithful to the contours of the story, fans of the second book are going to be happy, but there are detours, twists and turns that are not in the books,” he said.

Both Miranda and Scott remain tight-lipped on the final fate of their characters (those who have read the novels will be dying to see if Lee Scoresby’s storyline ends in a similar fashion), but the pair tease that there will be plenty of rainy and wind-swept balloon action in Season 2.