‘The End of Us’ Review: A Lockdown Breakup Comedy That Feels Uncomfortably Familiar 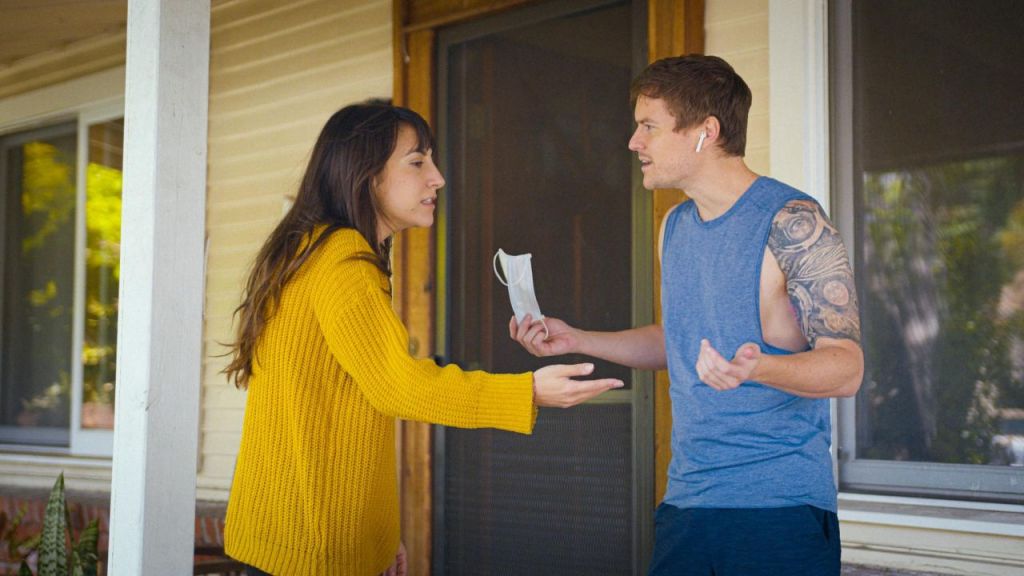 As we recently passed the one-year anniversary of the first coronavirus-dictated lockdown, the internet’s insatiable hunger for short-term nostalgia kicked into overdrive. Memories from March 2020 trended again as fodder for renewed memes and Twitter threads, feeling at once from just yesterday and eons ago. An early entry in the inevitable subgenre of lockdown chamber cinema, Henry Loevner and Steven Kanter’s debut feature “The End of Us” taps into that same throwback impulse, as it plausibly dramatizes the up-and-down tensions between a newly separated couple forced into prolonged cohabitation by the California stay-at-home order.

The film’s evocation of early pandemic panic, in that period where we bumbled cluelessly into practices and precautions that soon became standard, is at once bleak and rosily affectionate — largely relatable even to viewers who don’t identify with the film’s cute but exasperating pair of exes. It remains to be seen how willing an audience there is for light entertainment that conjures what is, for many of us, still a stifling reality. Still, as prospective cinematic time capsules for 2020 go, this unassuming, amiably performed SXSW premiere lands significantly closer to the mark than such comparable attempts as Doug Liman’s obnoxious, all-star “Lockdown.”

A handful of opening scenes capture the hazy status that the pandemic occupied in many people’s minds in the weeks before our lives were bent to its demands. Late-20-somethings Nick (Ben Coleman) and Leah (Ali Vingiano) are kinda-sorta aware of the news, but more preoccupied with their jobs, or lack thereof: Leah is an overworked startup employee who pays all the bills, while Nick is an out-of-work actor alternating fruitless auditions with bartending hours. It’s clear from our first glimpse of them together, as Leah flatly runs lines with Nick with one eye on her phone, that their four-year relationship has run its course, and after a heated shouting match, they reach the same conclusion at the worst possible time.

With not enough income to rent a place of his own, and no friends willing to take him in as the lockdown order comes crashing down on them, Nick moves onto the living-room couch — amid circumstances that would test even the healthiest of relationships. Predictably enough, Leah’s compact house soon proves too small to contain his sulking space, her makeshift office and their combined laundry-list of issues and resentments. Yet just as “The End of Us” seems on the verge of becoming a kind of hellish 50-last-dates exercise, in which two frayed people effectively break up in new ways day after day, things subtly and mercifully change. As pandemic life forms its own rhythm, moods shift, defenses are lowered, and the former couple negotiate new ways to be around each other — and other people, as Leah enters into a cautious (and suddenly not-so-cautious) flirtation with hipster co-worker Tim (Derrick DeBlasis).

Proficiently taking on lensing and editing duties in addition to writing and directing, Loevner and Kanter keep the tone easy-breezy, while steering the narrative away from expected romcom routes. It’s clear from the outset that the chill, spacy Nick and the more proactive Leah were never a great match. Tim is no ideal knight in shining armor either: He seems less than compatible with the “Too Hot to Handle”-fixated Leah the second he loftily announces his lockdown project to watch one Criterion Channel film a day. (Cut to Leah, in one of the film’s snappier jokes, punching “what is a criterion” into Google.) That keeps proceedings credible, if not overly compelling, though at just a hair over 90 minutes, the film can afford to coast on its leads’ passive-aggressive chemistry.

Ultimately, “The End of Us” is best seen as an opportunity well taken. A setup that would smack of screenwriters’ contrivance at almost any other point in history (as in, say, 2006’s Jennifer Aniston vehicle “The Break-Up”) here takes on an organic authenticity. For the most part, at least: Loevner and Kanter occasionally fall back on the kind of dialogue (“We’re having an argument so you can hit the eject button again?”) that recalls sitcom banter more than genuine human neurosis.

Beyond its sweet slip of a story, the film is most memorable for its casually accurate depiction of 2020’s incidental absurdities: the improvised etiquette of when to mask up and let it drop, the rule-bending compromises we all devised between socializing and social distancing, the simple yet oddly alien ritual of the drive-thru COVID test. “The End of Us” gets enough of this right that, in an unusual way, one hopes it doesn’t resonate in years to come. Rather like the relationship in question, it’s a film to smile at and move on from, and that’s no bad thing.