Some films are appreciated from the start — the big blockbusters find their audiences or the acclaimed indies find the critical raves right out of the gate. Then there are films that are ahead of their time, that find a bigger audience as they age, where the appreciation might come a little later thanks to DVDs or television viewings.

When “A Knight’s Tale” opened in theaters on May 11, 2001, it wasn’t without fanfare. It featured rising star Heath Ledger in the lead, a writer-director hot off an Oscar win and a lot of buzz for the fact it mixed modern music with its medieval setting. It made its money back, had its fans and was notable for its fresh-faced cast who would go on to prominent careers. But it wasn’t a runaway hit; some were confused by the anachronisms and simply couldn’t get past a film about jousting that opens to the strains of Queen’s “We Will Rock You.” The film also had the misfortune to be praised by a non-existent critic — a major misstep by the studio’s marketing department.

Twenty years later, the influence of Brian Helgeland’s film cannot be understated; you could credit it for paving the way for hits like Netflix’s “Bridgerton.” While Helgeland has not seen that show, he recently read a review. “They were praising having modern dances in this older setting and I was just like, ‘What?’” he recalls with a laugh, before adding the piece did go on to mention his film. Its impact is visible in more personal ways: people with tattoos of famous lines from the film, individuals who request the costumes for their weddings, journalists who tell everyone involved with the film that it’s their favorite of all time. (Ahem.) Helgeland says it caught him off guard at first. “I guess because it’s a strange movie,” he says. “You know, there’s actually a whole group of medievalists who have PhDs and stuff and have written footnoted, scholarly discussions about it.”

For the uninitiated, “A Knight’s Tale” focuses on William Thatcher, a 14th century peasant who believes one can “change their stars” — he longs to compete as a knight but is forbidden because he’s not of noble birth. When his master, Sir Ector, dies, he takes his place and begins competing illegally in tournaments under the name Ulrich von Liechtenstein. He is aided by his fellow squires, the reasonable Roland (Mark Addy), the temperamental Wat (Alan Tudyk) and a hype man who happens to be none other than Geoffrey Chaucer (Paul Bettany.) They are later joined by female blacksmith Kate (Laura Fraser), so ahead of her time her logo bears a striking resemblance to the Nike swoosh. There’s also a feminist love interest in the form of Jocelyn (Shannyn Sossamon) a lady of noble birth, who’s lady-in-waiting is played by future Oscar nominee Bérénice Bejo. And no such film would be complete without a delightfully hiss-able villain, here in the form of Count Adhemar (Rufus Sewell), who also competes for Jocelyn’s affections.

The story delves into destiny, friendship and the quality of mercy but does so with unique action sequences, poetry, music, intelligence and above all, a sense of fun and joy that, as Helgeland goes on to explain, was a reflection of the shooting process. Helgeland spoke about the journey “A Knight’s Tale” took to the big screen, including Heath Ledger’s didgeridoo, Daniel Craig’s audition and his utter determination to cast newcomer Paul Bettany.

After starting with scripting horror films like “A Nightmare on Elm Street 4: The Dream Master” and “976-EVIL,” Helgeland had become an in-demand screenwriter. He was fresh off an Academy Award (with director Curtis Hanson) for adapting 1997’s “L.A. Confidential.” That same year he was credited on the Mel Gibson/Julia Roberts hit “Conspiracy Theory” and the Kevin Costner not-a-hit “The Postman.” (Helgeland has the rare distinction of having won an Academy Award and a Razzie in the same year.) He made his directorial debut with 1999’s “Payback,” starring Gibson. After filming that, he remembered an “oddball nonfiction” book he had read called “Tournament.”

It was a nice read, because it was mostly pictures. It was about how jousting was a sport, a competition, back then. One of the things that stuck with me was that you had to be of noble birth to compete. Even though I’d read it previously, it suddenly sparked an idea in me: He’s a peasant. It resonated because I was trying to go from being a screenwriter to a director and I thought, “Directors are nobles and screenwriters are peasants!” So he’s a screenwriter who wants to be a director. And Mark Addy is the DP and Alan Tudyk is the production designer, and so on and so forth.

Though a film about jousting with modern music might seem like a tough sell at the time … it was not.

I wrote it on spec, sent it out everywhere. For whatever reason, it got a great reaction, a bunch of places wanting to meet, all within 48 hours. I sold it to Sony right away. They didn’t give me notes, they just said, “We want to make this movie now. We want you to start meeting actors.”

Heath Ledger had just broken through in “10 Things I Hate About You” and was filming “The Patriot” for Sony at the time, and executives were excited by the dailies. Ledger had two weeks off and was flying from North Carolina to Australia, with a five-hour layover in Los Angeles. Helgeland went to meet him at the space age structure at LAX that was, at the time, a restaurant called Encounters (it closed in 2013.)

He came off this long flight and he had a tube with him, like something an architect would keep his drawings in. We sat down for lunch and hit it off right away. He loved the script. He was like, “I get to ride a horse, I get to joust, I get to sword-fight I get to have a romance, I get to be insane. I get to dance!” So we really didn’t talk too much about it, just got to know each other.

I finally said, “What’s in the tube?” He said, “Oh, that’s my didgeridoo.” And he pulls it out, and he’s showing it to me and telling me what it is. And then I said, “Can you play it? Or do you just kind of carry it around?” And the next thing I know, he’s playing it in the restaurant. And he’s amazing and I’m thinking, “Who’s going to come in and do better than this?”

Helgeland says he only seriously met with one other actor – Paul Walker, who would break out with “The Fast and the Furious” in 2001, the same year “A Knight’s Tale” was released.

I really liked him a lot. Of his age group, he was the star. But he was so American, I wasn’t sure he’d get the Englishness of it. 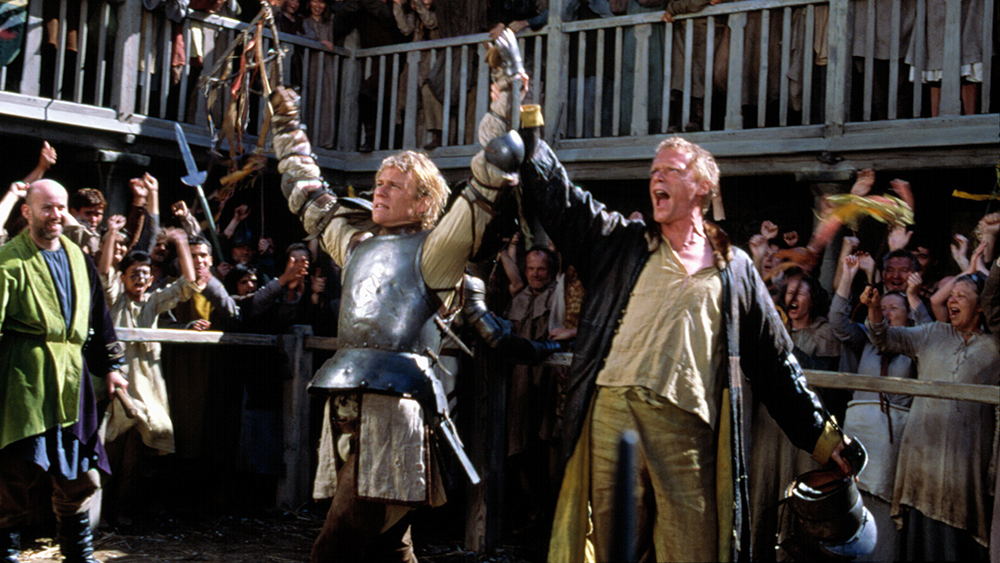 After casting Ledger, Sony hoped to surround him with star names in the supporting roles, resulting in some unique casting suggestions.

Mark Addy was right off “The Full Monty,” he was easily the most well-known member of the cast. Sony was happy to have him. But they wanted Hugh Grant for Chaucer. I just didn’t see him doing it, he’s was starring in big movies, he wasn’t going to play second fiddle. And then they wanted Drew Carey for Chaucer. Nothing against Drew Carey but I was like, “How are we going to have Drew Carey walking around in this movie?” I rejected him for Chaucer, then they wanted him for Wat. But Alan had done an off-Broadway show and an executive was high on him for Wat. I think Alan came in and read, and it was over. It was undeniable.

The two hardest parts to cast were Chaucer and Jocelyn. [Casting director] Francine Maisler had found Shannon, she was a DJ at Gwyneth Paltrow’s birthday party. Francine asked her if she’d ever acted and had her come in and read on a couple different projects to get her some experience. Nothing had really clicked, I think “Knight’s Tale” was the first thing she was ever in outside some MTV videos.

From the start, Helgeland was committed to casting Paul Bettany as Chaucer; he met the actor he met while working on a previous film. Bettany makes a memorable Hollywood debut in the film, appearing stark naked.

I had tried to do a movie at Fox before “A Knight’s Tale” and while we were casting, Paul had come in to read for some other movies. An actor left the sides to my film on the table and he said, “I don’t want to meet on this other movie, I want to be on this movie.” I had gone to lunch and he had a flight to catch, so they put him on tape. When I saw it, I was like, “Where is he? This is the guy!” And he was already on his way to London. I was convinced he was the guy but he hadn’t done anything you could show anybody and Fox was like, “We’re not casting this guy.”

They wanted me to meet Joaquin Phoenix for another role and he was in London so I said, “I’ll go to meet him only if I can screen test Paul Bettany.” So I pulled out every favor I had and got a location, another actor to read with him, and cut it all together and they still wouldn’t do it. And that movie fell apart. But while I was in London, we went drinking every night and became buddies.

So I wrote Chaucer for Paul and sent him the script. And day or two went by and he called on the phone and it was basically like, “You fuck, you fucker!” And it was Paul. He goes, “I’m naked! I’m fucking naked.” And I said, “Do you want to do it or don’t you?” And he goes, “Of course I want to do it!” And I go, “Okay, because it’s gonna be a struggle.”

By now, Bettany had some buzz on him thanks to appearing in the brutal British crime drama “Gangster No. 1,” but his role in that was very different.

Sony executives saw that film and were like, “You want this guy to play Chaucer? He’s a psychopath!” So Paul came and stayed with me and we shot like 100 different versions of scenes and they just kept saying, “No, no, no. He’s not funny enough. Chaucer is so funny in the script and this guy is not funny. What’s wrong with you?” It was almost like they were worried about my mental health. There’s a scene when you first meet him and he steps on a thorn and pulls it out of his foot. I said, “Paul, put your foot in your mouth and pull it out.” And we shot it that way, he sort of contorts himself. And I showed it to them and they all started laughing and that’s what won them over.

Helgeland also had a couple close brushes with James Bond in his casting.

I cast James Purefoy as Edward, the Black Prince, and I was like, “This guy is going to be James Bond.” When he’d walk on the set, we’d all start singing the theme to James Bond, the “dun-dun-dun-dun.” And he’d say, “Oh, stop!”

Actually, Daniel Craig came in to read for Count Adhemar and he was fantastic. This was long before he was Bond, obviously. He was just amazing. But I had already taken to Rufus Sewell for the role. I came close to changing my mind but it ultimately came down to Daniel was blond and Heath was blond and I though the contrast in looks with Heath and Rufus was better. And they became best friends, those two, they would carouse through Prague together.

Helgeland cast Scottish actor Laura Fraser as Kate, a widow who takes up her husband’s trade as a blacksmith