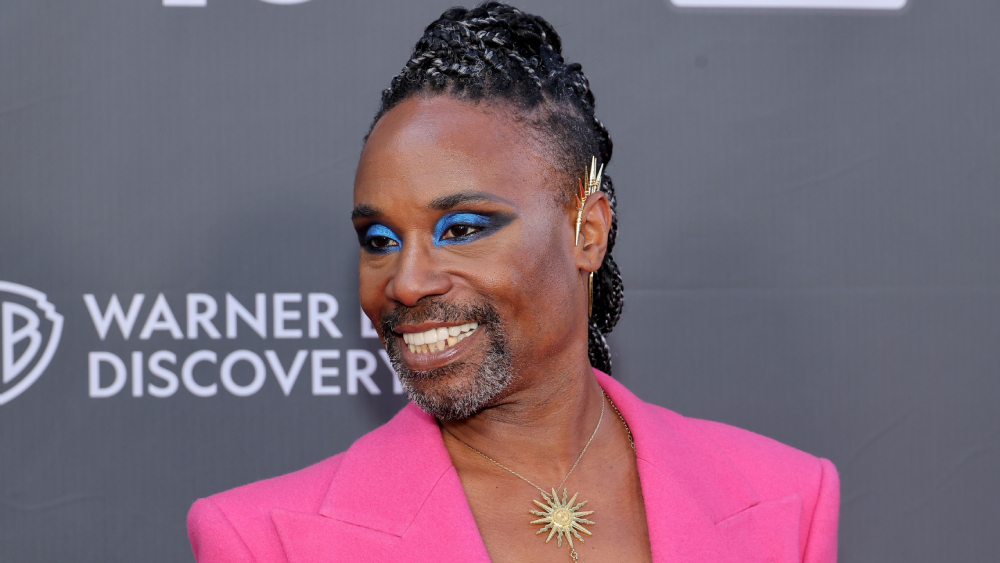 In true Billy Porter fashion, the multi-hyphenate superstar didn’t hold back while delivering a politically-charged speech Thursday night at the opening of this year’s Outfest.

“Fuck SCOTUS!” he said while accepting the Outfest Achievement Award.

His words were met with applause and cheers from the crowd gathered at the Orpheum Theatre in downtown Los Angeles.

He condemned Republicans who testified against Donald Trump and his close aides during the Jan. 6 hearings. “None of you Republicans who are coming forward in these hearings right now are heroes,” Porter said. “You are not heroes.”

He blasted them for standing by Trump until the Capitol riot: “Fuck y’all, too!”

The “Pose” star said left-leaning voters got too comfortable before Trump was elected. “Our messaging has to change,” he said. “We thought we won something – the Democrats, the progressives – we got civil rights, we got Roe v. Wade, we got marriage equality, all the rest. We got a Black president and then we all sat on our asses and ate Bon Bons for eight years and then the unthinkable happened.”

Porter said, “We lost our vigilance. It’s time for us to take that shit back.”

He continued, “Our 24-hour news cycle has forgotten to illuminate that the reason the pushback is so severe in this moment is because the change has already happened. We’re already here. Look at me!”

Porter’s directorial debut “Anything’s Possible,” a coming-of-age rom-com about a Black trans girl in high school falling in love for the first time, opened the festival.

Thursday marked Porter’s return to Outfest after first attending the festival 22 years ago for the premiere of the Greg Berlanti-directed LGBTQ dramedy “The Broken Hearts Club: A Romantic Comedy.”

For years afterwards, Porter struggled to get work in Hollywood because he was “too flamboyant,” he said. “There was no internet. There was a social media telling me that I have my own voice,” Porter said. “As a matter of fact, the messaging I received from the world was exactly the opposite: ‘Shut up, you Black faggot. Nobody wants to hear from you. Nobody cares’.”

Porter was diagnosed with diabetes and HIV in 2007. “What I had feared the most I had become,” he recalled. “I had become the exact statistic the entire racist and homophobic world said I would be.”

His career began to take off when he earned a Tony in 2013 for his work in “Kinky Boots.”

On the red carpet before he delivered his speech, Porter told Variety, “I was told from the beginning of my career, from allies and haters alike, that my queerness would be my liability. And it was for decades — until it wasn’t. And now it’s my superpower. I’m redeemed.”

Porter was presented with the Achievement Award by “Anything’s Possible” stars Eva Reign and Abubakr Ali.

Three or four times a year, something special happens in New York City: A rare opportunity—and precious luxury in theater these days—to pay $35 for the hottest ticket in town (if you can get one). The bill is “Encores!,” New York City Center’s yearly programming of musical theater.

Once an obscure incubator to resurrect little known or passed-over productions—the current Broadway revival of “Chicago,” which has run for 25 years, began as an “Encores!” show in 1996— New York City Center’s two-week only productions are now a staple of New York theater, sought after for their pared-down musicals packed with big stars.

“When they call you, you come,” Headley, who stars as the Witch, told Variety after the opening performance on Wednesday. “You do your best to get here, because it’s such a special theater.”

Each “Encores!” production—offered as a concert-style performance for cost, though you’d never know, save the scripts actors are legally mandated to carry onstage—lasts for two short weeks. Rehearsal, a secretive process, begins just two weeks before.

“It’s like a bullet train, and you’re trying to stand up and not be hurdled off the bridge,” Harris, who plays the Baker, described to Variety. “There is so much nuance in Sondheim’s work, and people spend an undue amount of time parsing and imagining it. Trying to take a stab at this in such a truncated environment is an enormous mountain to climb.”

The view from City Center’s Neo-Morrish stage, however, is pretty great.

“Blink and you’ll miss it,” Bareilles, who joins as the Baker’s Wife, said after the show. “Tonight was a pretty fucking amazing audience, and it reminds you that all of the stress is worth it.”

That’s a good sentiment for “Into The Woods,” too—a canon musical theater piece offered to the “Encores!” audience on Wednesday for the first time since its composer’s death. Like all of Sondheim’s work, “Into The Woods“—a parable about witches and giants and fairytales, about wishes coming true, not free—felt clearer than it’s ever been. Sondheim’s careful instructions—that the world is dark and wild, that you decide what’s good, and that no one is alone—were overwhelming.

“We have been in the woods,” Headley offered after the show, seriously. “And we’ve seen people die. There has been a giant in our midst.”

“It’s been great to visit and revisit ‘Into the Woods’ on this side of our lives,” she continued, needing to add no descriptor for our time. “Doing this show now, it’s different for me. When I say as the Witch, ‘You’re not the only one who has suffered loss,’ I’m bringing the entire audience with me.”