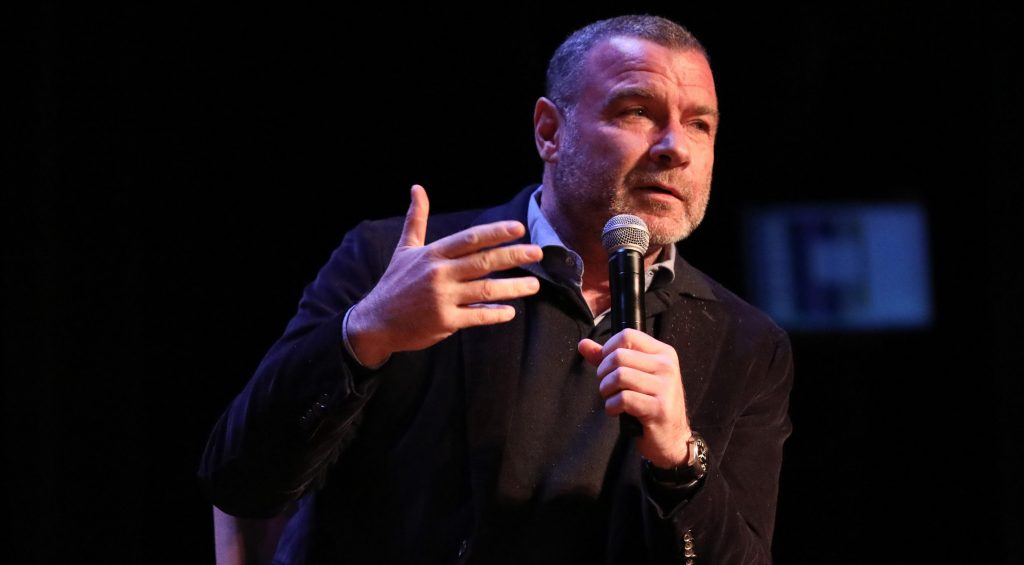 Playing a character in a film who dies by suicide, adapted from a book penned by a famed author who met the same fate, is already a heady experience. But for Liev Schreiber, who tackles the stoically heroic Colonel Richard Cantwell in the big screen version of Ernest Hemingway’s final full-length novel, “Across the River and Into the Trees,” life imitated art — which imitated life — in ways not even Schreiber could have expected.

“One of the things that happened to us in this epic, long shoot [in Venice, Italy] is that my father had found a sarcoma on his leg — a very, very rapid [growing] one,” Schreiber told a crowd gathered for a special screening and premiere of the film, directed by Paula Ortiz, at the Sun Valley Film Festival Thursday night.

“We only had a month left to shoot,” he continued, “and the crew graciously stopped the film and let me go home to Seattle, where my father lives, to be with him, and I got him into a treatment clinic. And [by this point] the tumor was all over the lungs, everything. So, I got back to Venice to finish shooting the film. And then my father calls and he says, ‘I’m not doing chemo anymore.’ And in [Washington] they have euthanasia laws, and my father decided he’s going to take the pill and do it. And at this point we were also having trouble with the financing of the film — we couldn’t finish the film. And the Italian crew found out that my father was dying — that he was planning to take this pill — and they worked the next few weeks for free, they worked straight through without getting paid. And then, of course, in the back of my head, I’m playing this role, and I’m thinking here I am playing a man about to commit suicide. And these Italians on the crew, they understand the generational thing of feeling like we don’t spend enough time paying respect and honoring what the generation before us has accomplished. And that was a very meaningful piece of making this film for me. It was very powerful for me to have that.”

Actor and local Hailey, Idaho resident Mariel Hemingway, Ernest’s granddaughter, was in attendance at the Sun Valley premiere, which took place at the storied Opera House in the ski resort town, just miles away from Ketchum, where the Nobel Prize-winning writer (received for “The Old Man and the Sea”) died by suicide in July 1961 and is now buried. The film’s producer Robert K. MacLean, co-producer Andrea Biscaro and producer Kirstin Roegner, were also on hand for the post-screening panel discussion, moderated by Variety features editor Malina Saval.

“Across the River and Into the Trees,” published in 1950 and spanning a period of a single day on the heels of World War II, recounts a star-crossed, May-December romance between Cantwell, a 50-year-old U.S. Army officer and a much younger Venetian woman named Renata, played in the film by Matilda De Angelis. It is the last of Hemingway’s novels to spring to life onscreen. At its core is a story about love found too late. When asked if this was a theme to which Schreiber could relate, the eight-time Emmy-nominated actor good-naturedly quipped, “I’ve got a few more months.”

“It’s a book about the scandal that happened with Hemingway and [Adriana Ivancich] the 19-year-old girl that he was in love with in Venice, and whom many believe he wrote this book for,” Schreiber noted.

MacLean pointed out that while “the character is autobiographical,” Hemingway “crafted that character for a highly-decorated American hero, Charles [Bentell] Lamb.”

“I think running through the whole story is the question of mortality and one’s own mortality,” MacLean added. “And Hemingway, at this point in his life — I think he was a bit lost then. And I think for him, [the girl] became some kind of a muse.”

Biscaro called the director of photography’s work “fascinating to watch.”

“There were fewer lights compared to a normal movie,” the Italy-based producer said. “When it came to the scene in San Marco square, he was painting the building [with light] with archetypal awareness. There is also the scene in the secret garden, which you see painted in a soft yellow light. It was literally like painting each and every scene.”

Of what primarily attracted him to the role, Schreiber said, “the reason I was interested in this story is — and the timing turned out to be perfect, unfortunately — is that it’s about a generation of Americans who instinctively gave their lives to defend their families, to defend their right to democracy. I’ve always been moved by that generation. It’s my grandfather’s generation.”

He continued, “Hemingway’s really conflicted relationship to masculinity, and his own midlife crisis, and the shame and everything, which, you know, of course, I share all that stuff. But the part that really moved me was the part about this generation of people that we’ve lost touch with somewhere in our culture.”

The festival also opened with National Geographic Documentary Films’ “Fire of Love,” directed by Sara Dosa. Editor Jocelyne Chaput was in attendance for the screening at the Argyros Performing Arts Center and Chris Albert, executive vice president of communications, National Geographic Content and Disney Branded Television, introduced the film. The fest is also set to screen National Geographic’s “The Territory” and the Disney-branded doc “Mija.”