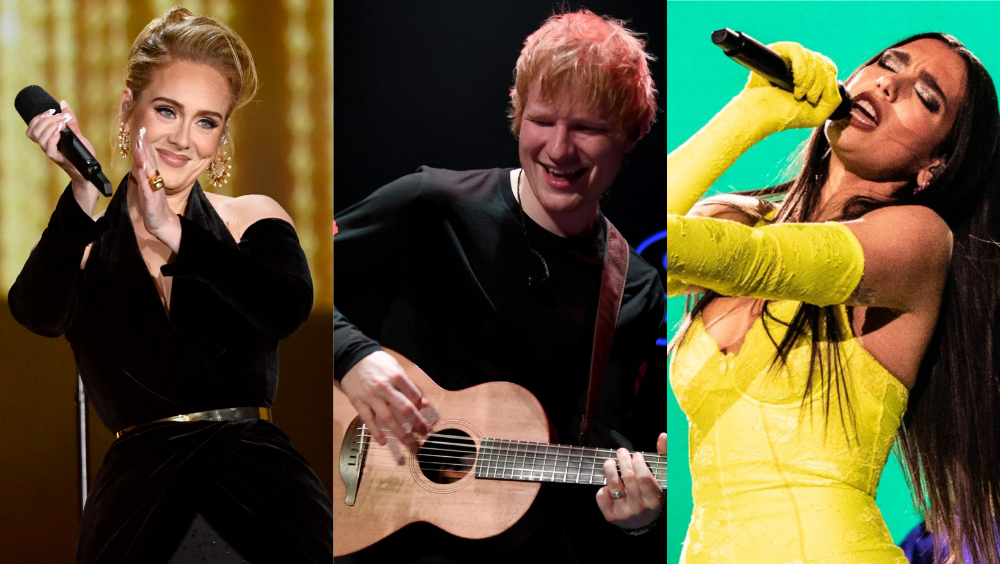 British music exports soared 13.7% to a high of £590.8 million ($709 million) in 2021, the highest total on record, per the latest analysis from British Phonographic Industry (BPI), the trade body for independent and major record labels in the U.K.

The 2021 total is the highest since the BPI began its annual survey of record label overseas income in 2000 and was driven by a record number of U.K. artists, nearly 400, each achieving 100 million-plus global streams. These include superstars like Adele, Dua Lipa, Dave and Ed Sheeran, and several emerging artists, including Glass Animals, PinkPantheress and Rex Orange County. More than 600 U.K. artists achieved at least 50 million audio streams, while over 1,500 surpassed 10 million audio streams.

However, the U.K.’s share of the global market is under pressure from established markets that are consolidating their share of the world market, such as the U.S. and Europe, and from fast-growing domestic music markets that are achieving greater international success such as Latin America and South Korea, the analysis notes.

Geoff Taylor, chief executive BPI, BRIT Awards and Mercury Prize, said: “These record-breaking figures once again highlight the extraordinary popularity of British music internationally. This is not just about our much-loved superstars, but new artists and bands from all over the U.K. who, with their label’s investment and expertise, are able to successfully navigate the competitive streaming landscape.”

“Recent market estimates suggest the global recorded music industry could double in size by 2030, meaning there’s ample opportunity for more artists to achieve international success and for music to deliver for U.K. PLC,” Taylor added. “But continued success isn’t guaranteed, as competition increases from international markets, making it harder to cut through and putting pressure on our global market share. The Music Exports Growth Scheme provides vital funding to help independent labels and artists expand their businesses overseas, and with sustained support from Government, British music will continue to thrive all around the world.”

More than 60 U.K. artists whose music was streamed at least 20 million times worldwide last year received funding through the Music Export Growth Scheme, an export support scheme for independent music companies, administered by the BPI and joint funded by industry and the U.K. government.

When Dua Lipa played a two-night stand at L.A.’s Forum this past week, with her U.S. tour just a few dates away from coming to a close, there was a sheet-cake bearing her image backstage in the VIP Forum Club area, a custom that’s de rigueur for headliners coming through the storied arena. But in our minds, if nowhere else, we should be baking a “happy anniversary” cake commemorating the two-year mark for “Future Nostalgia.” Her sophomore release, which came out March 27, 2020, set an aspirational mood, if not the predominant one, for tough times then arriving and long to follow. Speaking of “sugarboos,” it induced the kind of dopamine rush that made so many of us — across states, nations and continents — feel like the girl with the most cake.

That Lipa is just now getting around to performing this music live feels like an ideal punctuation point to all but officially mark the end (knock on wood) of a quarantine era. It’s a symbolic reward, maybe, for doing good or doing what we had to do and limiting the discotheque to our living rooms for longer than we ever could have imagined socially possible. No one wanted or probably even now wants their album to be remembered as a “lockdown album,” least of all Lipa, who publicly wept on her Instagram back in mid-March of 2020 over whether to put out “Future Nostalgia” in the midst of a sudden global funk or not. But what was it John Lennon sang about God being “a concept by which we measure our pain”? In the end, Dua Lipa has been a concept by which we measure our pandemic.

When it comes down to history being written, there will really be two albums remembered as the quintessential quarantine albums: “Future Nostalgia” and Taylor Swift’s “Folklore” (with or without its worthy adjunct, “Evermore”). These two touchstone releases of 2020 barely seemed to exist in the same world, let alone genre, but they effectively captured a populace’s polarized reactions to the cessation of normal life as anyone knew it. The “Folklore” m.o. was to lockdown was something not to endure but to embrace — go inward, brooding a little, balladeering a little and, most importantly, using the extra alone time to get shit done. And the separate-but-equal “Nostalgia” aesthetic? Screw solitude — let’s embrace love and levity, and have a party in our heads till we can get in touch with our own bodies and each other’s again. Some of us might’ve even played these albums on alternate days, just to achieve balance in the Force.

“Future Nostalgia” would have been a great album no matter when it came out, of course… and with its purposeful mixture of late ’70s, ’80s and ’90s sounds, it could have come out almost any time in the last 25 or 30 years. At the time it was released, and it felt like a stone-cold pop classic, and two years of repeat listens have only confirmed that it wasn’t just a lockdown variant of Stockholm syndrome that made us feel that strongly in the moment. The first nine of the 11 tracks are an unbroken string of songs that were either phenomenal singles or should have been. Is it really possible “Pretty Please” or “Hallucinating” weren’t No. 1 smashes? That’s only because “Don’t Start Now” and “Levitating” sucked up all the oxygen in the room, or ran out the clock — pick your metaphor; nearly any “album track” on “Nostalgia” would have been a lesser singer’s single-of-a-lifetime. (It’s easiest to think of the last two numbers on the original release as bonus tracks; “Good in Bed” and “Boys Will Be Boys” aren’t any lesser, they just feel like they’re off a different, less disco-ey, cheekier album, like one of Lily Allen’s.)

One reason why “Future Nostalgia” was such a feel-good effort was because you could feel the group involved. It took a village of writers and producers to achieve this album done along with Lipa, and it’s the rare kitchen with that many cooks that feels utterly cohesive, miraculously, in its musical and lyrical goals. “Future Nostalgia” is the best dance-pop album of the century so far. And it’s interesting to consider whether that is in spite of or because of the fact that Lipa is a slightly more recessive personality, as the limelight g