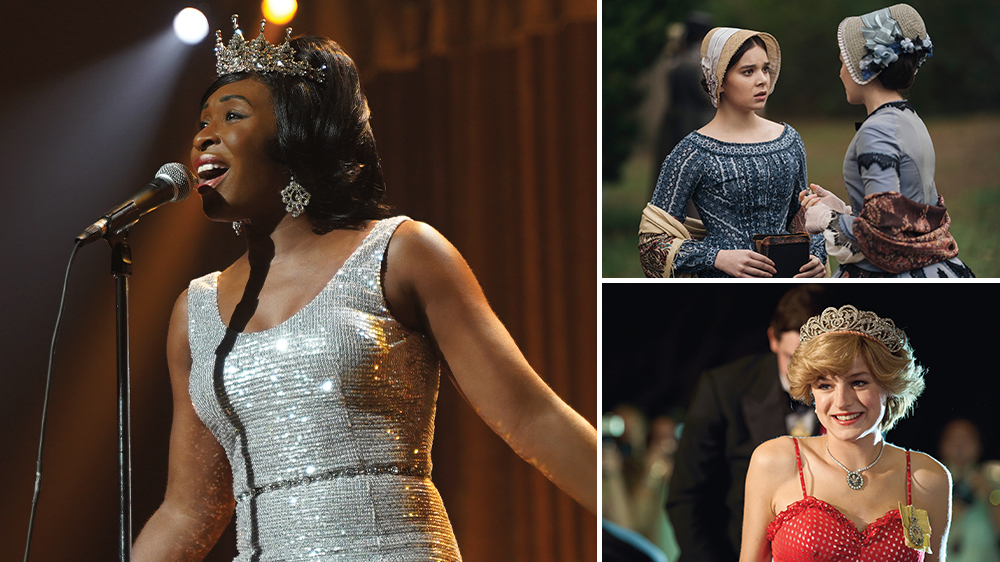 In the opening moments of “Genius: Aretha,” Cynthia Erivo’s Aretha Franklin is seen on stage as her career begins to skyrocket. The scene then cuts to Franklin in a gaggle of reporters, peppered with questions, one of which comes from a man asking whether her children were in the audience. Franklin responds, “It’s past their bedtime.” To which the man snickers in reply, “Weren’t you a mother at that age?”

“Genius: Aretha” is one of several recent series, in both the scripted and docuseries space, that offers nuanced and unapologetic portraits of female historical and pop-culture figures. Telling their tales now, and under the careful influence of female leadership, allows these projects to reflect the cultural awakening about sexism and gender stereotypes that existed in film and TV since the days of silent movies.

With “Genius: Aretha,” the deft female hands behind-the-scenes include Courteney Monroe, president of National Geographic Global Television Networks, and Suzan-Lori Parks, who penned the scripts for all eight episodes. Nowhere are their sharp eyes more evident than in the show’s handling of the fact that Franklin became a mother at the age of 12. Rather than making it a source of shame — other than showing glimpses of how outsiders instantly judged her — Franklin’s early entrée to parenthood is dealt with as part of her journey.

“One of the laws of writing is, write what you know. One of the advantages of having been a 12-year-old girl myself is that I know what that was like,” Parks says.

The reconsideration of how prominent women have been treated by history hit a fever pitch earlier this year when the Samantha Stark-directed “Framing Britney Spears” documentary, an episode of FX’s “The New York Times Presents” series, sparked some soul-searching for the media establishment. The level of misogyny displayed in mainstream media coverage of Spears’ public trauma a decade ago was shocking when viewed through a post-#MeToo lens.

Similarly, Netflix’s “The Crown” has excelled in delivering three-dimensional portraits of iconic women. In Season 4, Gillian Anderson made Margaret Thatcher come alive beyond her “Iron Lady” image and helmet of teased hair, while Emma Corrin’s knockout performance reinforced how young and vulnerable Princess Diana was when she walked down the aisle with Prince Charles in 1981 — and how clueless she was about her husband’s true love.

“We’re very aware that, after getting more and more closer to the present day, there is obviously a very emotional sense of responsibility and [the need to] conduct ourselves as well as we possibly can, whilst allowing people the freedom to find the drama, and to find the stories that connect and that feel truthful,” says “The Crown” executive producer Suzanne Mackie. “I think people will bring to it their own memories, their own sense of ‘Gosh, I remember what it felt like when…’ The drama has to reflect that emotional connection.”

Emily Carman, associate professor of film studies at Chapman University, stresses the importance of that personal perspective. “There are more female directors and writers working in Hollywood and that means you’re getting that point of view in a more multi-faceted way than ever before,” she says. “It’s finally coming through in the way these stories are told and which stories are greenlit. It’s making us think about how we can revisit how we tell the [true] stories of women’s involvement in history.”

The women behind “Genius: Aretha,” Lifetime’s “Robin Roberts Presents: Mahalia” and Apple TV Plus’ “Dickinson” undoubtedly helped shape those eponymous leads’ stories so that they showcased more than just home, family and romantic relationships. Specifically, all three of these bio projects focus heavily on women striving for professional success and achievement.

Alena Smith, creator and showrunner of “Dickinson,” says part of her goal with her comedy is to counter the conventional wisdom that the titular character was morose and isolated for most of her life. Smith says there has been a steady stream of scholarly research, based on Dickinson’s letters and poems, to demonstrate that young Emily (played by Hailee Steinfeld) had more control of her 19th century life than history has presented.

“Our version of Emily is never a victim of circumstance even though her circumstances were difficult, especially because of her gender,” she says. “She’s a very paradoxical, very mysterious figure, which invites reinterpretation.”

Linda Berman, an executive producer of “Mahalia,” says that film’s storytelling focus was firmly on the titular Mahalia Jackson’s determination to use her voice as a spiritual vessel.

“She spoke to people through her music,” Berman says. “In her mind, God was speaking through her. She was so magnetic and determined to reach people.”

For “Genius: Aretha,” Franklin’s story was rooted in her outsized talent as a musician from the start. Although she did not formally read music, Franklin’s raw talent and instincts helped define the sound of her generation. “Lady singers were for so long looked at as ‘Oh, she has great pipes,’ but not as musicians,” Parks says. “It was very important to me to show her as a brilliant pianist. She was the one in the studio crafting her sound.”

The question whose stories are told and why is particularly fraught when it comes to the stories of women from underrepresented backgrounds.

“Historically, Black women and other women of color haven’t had a lot of biopics. The question is, why do we prioritize some stories over others?” says Roxane Gay, author and cultural commentator. “When women’s stories are told from a male point of view, they tend to tell such weird slices of the story.”

Parks credits Erivo and a strong supporting cast for bringing depth and nuance to the relationships that were most important in Franklin’s life. During the filming of Episode 2, Parks recalls Erivo and Patrice Covington, who plays Franklin’s sister Erma, questioning the nature of the conversation in the script between the two of them about the men in their lives. The actors suggested that the sisters would be more likely to drink wine and trade a few barbs. Parks recalls ducking behind a curtain on the set to do a lightning-fast rewrite.

That moment of female collaboration stands out to Parks because it embodied the spirit of striving to find the authentic core of both women.

Actress, singer and producer Hailee Steinfeld is set to release a new single entitled “Afterlife” on Sept. 19, a track she created for her upcoming Apple TV Plus series,”Dickinson.”

“This is a song I’m incredibly proud of, and I feel like after embodying this character, I have a more fearless approach to my writing,” Steinfeld shared at the Tribeca TV Festival in New York City on Saturday Night.

“Dickinson,” a period piece about Emily Dickinson with a modern, comedic twist, is Steinfeld’s first-ever full time television series, and with it she experienced another big first by unveiling the show at the event: “Dickinson” is the first Apple TV Plus series to debut to the public, and it did so well-ahead of the Nov. 1 launch of the new streaming service.

Series creator and showrunner Alena Smith described “Dickinson” as a “crazy psychedelic version of the 1850s.

“It’s this giant weird crazy collage, and the music is this direct root straight into her brain,” Smith explained. “With Hailee as our lead, who has a double life, as also a pop star and musician…my hope is that the music will make you feel everything that Emily has trapped inside and wants to burst out.”

For Steinfeld, who doubles as an executive producer on the half-hour series, the music was a main factor in drawing her to the project. The music of Billie Eilish, for example, is a backdrop to the show, and “Dickinson” even brought on rapper Wiz Khalifa to play Death in a guest role. (Other guest stars include comedian John Mulaney and “Girls” alum Zosia Mamet, who’ll do a parody of Louisa May Alcott.) The modern-day additions serve as tools to help convey thoughts within Dickinson’s mind, which are depicted here as wild, whimsical and far more imaginative than what is usually assumed to be the static life in which she was living in 19th century Amherst, Mass.

“She sits in the corner of her room [writing] and looks out the window and there’s a world out there — but even a bigger one in her mind,” Steinfeld said, adding that the show has “incredible comedic moments and this dark humor and dramatic moments and everything in between, and it really reflects everything in her poetry, which is every possible emotion.”

“She broke all the rules of her time, sort of in secret,” Smith added. “Spoiler: her life was boring. Not a lot happened…the action was in her head.”

Although the series is set in the 1800s, the team behind the show feels its themes are relevant to today’s social climate highlighting women’s voices, as Dickinson is portrayed as a self-assured young woman who knows she has more to offer to the world than the housewife-in-training life she is living.

“The basic idea here is if Emily wasn’t understood in her time, maybe we can better understand her now,” Smith said. “I once read this thing that said period shows make the best feminist TV because when things were more exaggerated, we can perhaps look at how things aren’t so different today.”

Jane Krakowski, who plays Emily Dickinson’s mother in the series, said she’s still figuring out how strongly comedic the show should be, but noted, “I think the parallels between young women today and Emily Dickinson will resonate with a modern generation.”

She also pointed out that she believes the show can inspire young women to pursue their passion and dream beyond the life they’ve been born into. “A lot of this generation this this show is aiming to, or certainly the fans that Hailee is going to bring in, don’t really know Emily Dickinson or don’t know her poems,” Krakowski said, “and I think it will be wonderful to introduce a whole generation of young, feisty girls who want to make a mark on the world to Emily Dickinson.”

Steinfeld agreed: “What’s really cool about this show is when you’re watching it, you kind of forget that it’s a period piece,” she said. “Speaking personally as a young female, there definitely are parallels. The pressure that Emily Dickinson is under to feel or act or do certain things, I think women still feel that way. … We hope that people see this and feel seen and feel heard, because that’s exactly what Emily was searching for, to be understood. … It’s crazy and it’s wild that we’re searching for that [in 2019] — obviously way less — but it’s still an issue.”

On a personal level, Steinfeld added that she has truly “felt this newfound fearlessness after learning about this character.

“I just feel in my work, in my life, in my relationships, in where I stand with certain people, a sense of fearlessness. And I hope everyone will find a little bit of that in the show.”