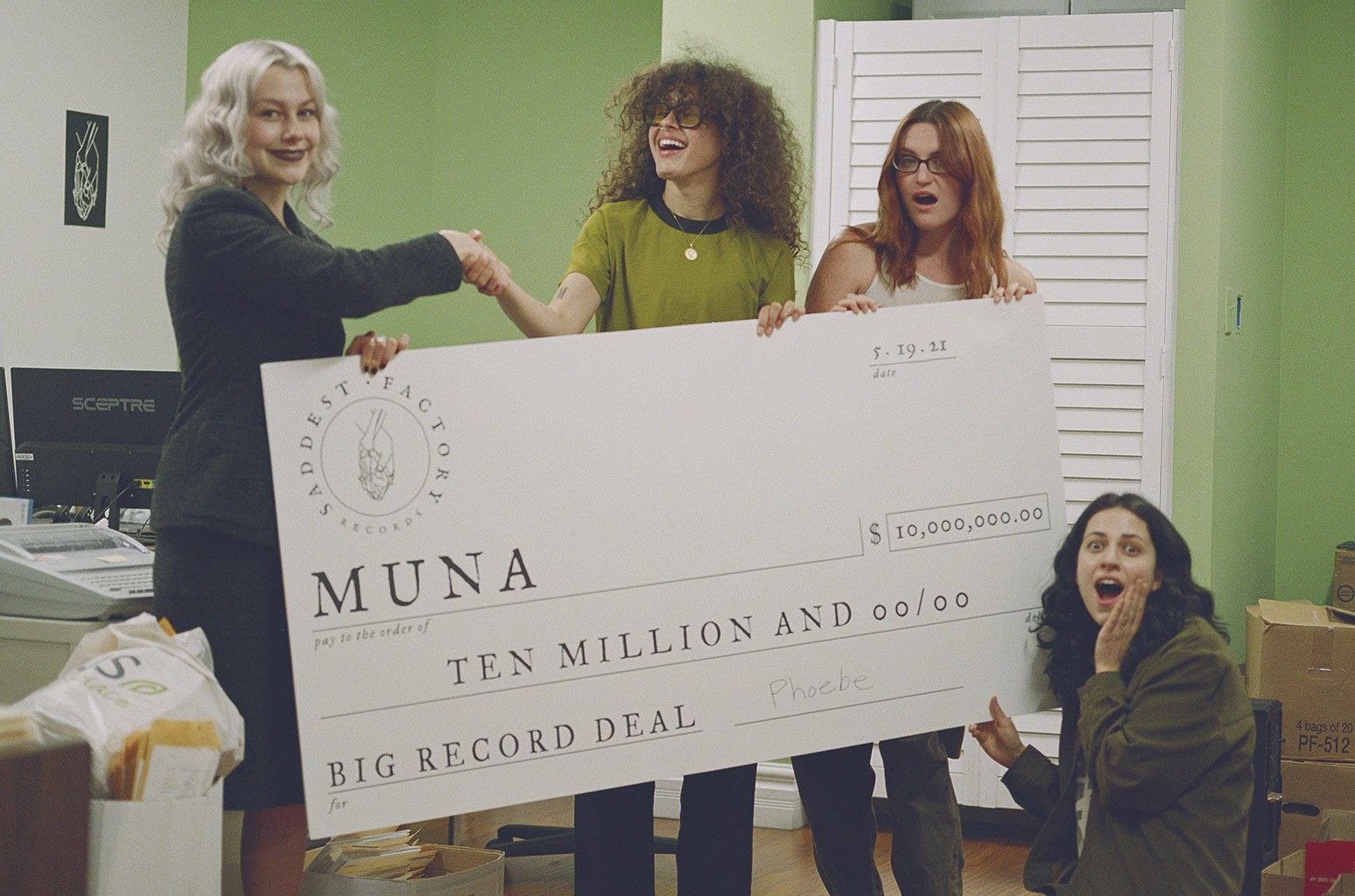 MUNA’s debut album, About U, was released in 2017. It was named one of Billboard’s 50 Best Albums of the year and landed the trio a slot on Harry Styles’ first solo tour. Their sophomore album, Saves the World, was released in 2019 to critical acclaim. Their festival appearances have included Lollapalooza, Osheaga, Outside Lands, ACL and Life Is Beautiful.
The band’s upcoming festival dates include Bottle Rock (Sept. 3-5) and Governor’s Ball (Sept. 25).

MUNA are the second signing to Saddest Factory after Claud, whose debut album Super Monster was released by the imprint in February.

TikTok is teaming with SiriusXM and its streaming service Pandora to produce content that will be cross-promoted across all three platforms.

The lineup is set to include TikTok Radio, a SiriusXM music channel featuring “the trending sounds that are redefining pop culture from TikTok,” as noted in a release. The channel will be hosted by a variety of TikTok creators.

Pandora will also host several exclusive playlists — released under the umbrella “TikTok Tastemakers” — featuring popular TikTok creators including Bella Poarch, whose playlist, the first in the series, launched on Monday (May 24). Each playlist in the series – also set to feature Christian Shelton and Nick Tangorra – will include each creator’s favorite songs along with exclusive commentary about their picks. The creators will in turn promote the playlists on TikTok.

“TikTok is redefining the way that fans discover music and artists, while enabling a new form of musical engagement and creative expression,” said TikTok’s global head of music Ole Obermann in a statement. “We are excited to work with SiriusXM on TikTok Radio and to bring TikTok creators to Pandora to make the trends, music, and creative influences that are playing such a defining role in modern culture even more accessible”.

Added Scott Greenstein, president and chief content officer at SiriusXM, “The effect TikTok has on music, and pop culture in general, is undeniable. Our platforms will provide a unique opportunity for TikTok creators to engage with our listeners with content experiences that have never been done before in audio. The exclusive SiriusXM channel will bring a new take on radio by tapping into the latest music trends on TikTok, while Pandora listeners will get access to playlists curated personally by TikTok’s top creators.”

UTA has signed Billy Ray Cyrus for global representation in all areas.

Cyrus recently scored a career milestone with the RIAA 14x Platinum-certified “Old Town Road” remix with Lil Nas X. The blockbuster song was released 27 years after Cyrus’ multi-platinum breakthrough single, “Achy Breaky Heart,” in 1992. That single, along with cuts including “It Could’ve Been Me,” “She’s Not Crying Anymore” and “Wher’m I Gonna Live When I Get Home?” sent the accompanying album, Some Gave All, to a 17-week run at No. 1 on the Billboard 200.

Some Gave All was followed by It Won’t Be the Last, another Billboard 200 No. 1 album that featured tracks including “In the Heart of a Woman,” “Words By Heart” and “Somebody New.” He later went on to act in TV shows, most notably the Disney Channel series Hannah Montana with his daughter Miley.

Cyrus has been nominated for a total of seven Grammys and won two for his work on “Old Town Road.”

Secretly Group’s Dead Oceans is the new label partner for Bright Eyes’ back catalog. The deal encompasses all Bright Eyes recordings spanning from their 1998 debut, A Collection of Songs, to 2011’s The People’s Key, their final album for longtime label home Saddle Creek Records. Dead Oceans released the group’s most recent album, 2020’s Down in the Weeds, Where the World Once Was.

“Our fandom of Conor’s music began in the earliest days of Bright Eyes, so the opportunity to work with him, Nate and Mike on reissuing their catalog is very special for us,” said Dead Oceans founder Phil Waldorf in a statement. “These are classic recordings, and we cannot wait to work closely with Bright Eyes on reissuing and reimagining the catalog in the years ahead. I honestly cannot believe that the Dead Oceans logo will be attached to some of my favorite albums of all-time.”

Diamond Platnumz is one of the most successful artists in Africa, with a YouTube channel boasting over 5 million subscribers and an Instagram following of more than 12 million. WCB-Wasafi’s roster includes Lava Lava, Mbosso, Rayvanny, Zuchu and Queen Darleen.

“The East and Central African music scene has exploded over the last few years and we believe by working together, we can help promote Diamond and his artists to more fans around the world, and introduce the Bongo Flava scene to a broader audience,” said Warner Music president, emerging markets Alfonso Perez-Soto. “This 360 partnership establishes a new way to engage with artists in Africa and our ambition to bring African talent to the rest of the world.”

Added Temi Adeniji, managing director of Warner Music South Africa and senior vp, strategy, Sub-Saharan Africa, “Warner Music’s nuanced approach to the African continent contemplates different blueprints across the various subregions and in that vein, this partnership with Diamond Platnumz and Wasafi firmly underpins our entrance into East Africa. Not only is Diamond one of the premier artists on the continent, but he is undoubtedly lynchpin of the Bongo Flava scene in Tanzania.”

Ziiki Media works with businesses engaged in content aggregation and distribution in formats including recorded music, music publishing, audiovisual content and live events. Warner Music announced its partnership with the company in May 2020.

“This partnership will further boost our presence in Tanzania and Africa as a whole,” added Arun Nagar, CEO and managing director of Ziiki Media. “We hope to engage with a wide range of artists across different music genres from all over Africa, and the partnership with Wasafi is central to that approach. We’re investing sizeable resources into the market because we’ve got faith in its artists and belief that we’ve only just scratched the surface of what we can achieve here.”

“It is real rarity to come across such a rich collection of masters that is independently owned,” said Josh Gruss, founder and CEO of Round Hill Music. “Telegram has done an amazing job working with the artists and recordings in this catalog. We respect the work that they have done very much. We are lucky to be the next owners and our goal is to deliver the same high quality of service to this group of very important artists.”

Added Telegram Studios CEO and co-founder Niklas Lundell, “During the past six years we have slowly and steadily built a catalog of great master recordings. Together with the artists we have successfully increased revenues and built value. Now the timing is perfect for the next chapter, we are very confident that Round Hill Records will continue to grow this amazing catalog to new highs and for us to take on new ventures and possibilities.”

Signed to Atlantic Records in the U.S. and Warner Music Group internationally, Burna Boy won a Grammy earlier this year for Best Global Music Album for his album Twice as Tall. He has collaborated with artists including Sia, Diddy, Sam Smith and Justin Bieber and was featured on the Coming 2 America soundtrack this year. He has a tour slated for the fall.

Tranter most recently scored a win with their co-writing credit on Justin Bieber’s Diamond-selling single “Sorry.” They also have a number of film, TV and theater projects in development including Wild, a musical starring Idina Menzel that’s set to be directed by Diane Paulus.

According to a release, Tranter’s work has contributed to over 50 million single sales and 40 billion streams on Spotify and YouTube alone. They are also a Grammy nominee and have won 14 total BMI Pop Awards, including two Songwriter of the Year titles.

“I’m forever grateful to the stories I’ve gotten to tell through pop music and will continue working on pop projects that deeply inspire me,” said Tranter in a statement. “However I’m already spreading my wings to tell stories through film, TV and theater and I need a team that can support and elevate those visions. From what I have already seen, the brilliant folks at Range can do just that.”

Tranter has collaborated with a host of A-list music talent, a list that includes Ariana Grande, Dua Lipa and Lady Gaga. They have also co-written two TV theme songs with Shea Diamond for the HBO series We’re Here and Equal and served as an executive producer on the soundtrack for Hulu’s Happiest Season.

“This meaningful acquisition of Singing News Magazine and Radio Network aligns with our strategy to accelerate significant growth and expansion of Gospel Music as a whole,” said Ray Flynn, president of Sea Walker Media Corporation. “Singing News is a great addition to Sea Walker Media Corporation, and we look forward to the synergies we will create between our other brands.”

Bonsai, the 1:1 video chat platform for business and career advice, has announced a seed funding round led by Activate Venture Partners. The new round brings the total raised to $5.3 million.

“We are reengineering how people build professional networks,” said Rosenfeld in a statement. “By providing a space for personalized advice and introductions, we make networking more equitable, modern, and deliberate.”

“When it comes to success, a lot comes down to who you know,” added Sullivan. “At Bonsai, the goal of partnering with others is simple – we unlock strong networks for those who don’t already have them, so they can learn and grow, even as the world becomes more virtual.”

Toronto artist and producer Preme’s label imprint, Reps Up Records, has signed joint label ventures with Columbia Records and EMPIRE, under which he will sign new talent. He has also signed a separate joint venture with Sony Music Publishing to sign producers and songwriters.

Preme (f.k.a. P. Reign) has collaborated with artists including Drake, Post Malone and Meek Mill. He also served in an A&R capacity on Drake’s 2018 album Scorpion.

The rapper is currently prepping the release of his sophomore album, the follow-up to his 2018 debut LP Light of Day, which will be released by EMPIRE/Reps Up. The first single off the new set is “Lost Hope,” which releases May 28.