Vin Scully Tribute at Dodger Stadium: ‘He Loved the Game of Baseball’ 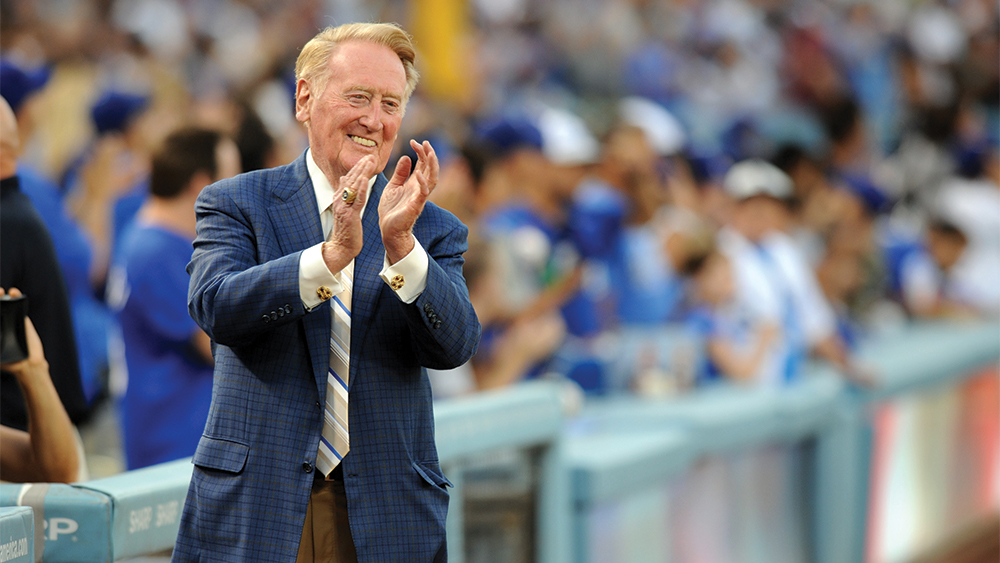 Vin Scully, the legendary Los Angeles Dodgers broadcaster who died Aug. 2 at the age of 94, was remembered in a tribute Friday at Dodger Stadium as a towering but humble figure whose work extended beyond the team to become part of the fabric of baseball.

“He wasn’t just a Dodger — he loved the game of baseball that we all love and care about,” Dodgers manager Dave Roberts said during the memorial ceremony that preceded the Blue Crew’s evening home game against the San Diego Padres.

“Vin, you will be missed,” Roberts said from the field, surrounded by team members. Some players them wore special hats bedecked with an image of an old-fashioned microphone with wings attached.

“We love you. We will think about you every day. Every game we come here, every fan who shows up to Dodger Stadium, there’s a reason you will always be remembered. You’ll always be linked to these five words: It’s time for Dodger baseball,” Roberts said.

Roberts instructed the stadium crowd of 50,000 to stand up and shout those five words loud enough so that Scully would hear the start of the game from his perch in “Blue heaven.” The fans obliged, many of them with tears in their eyes.

Roberts also had Dodgers announcers Joe Davis and Orel Hershiser unveil a larger banner hung underneath the picture window of the broadcast booth that read: “We’ll Miss You, Vin.” That was a nod to a similar banner that Scully unveiled on his final night in the booth on Sept. 24, 2016. That sign read, “I’ll Miss You, Vin.”

The salute included a video with highlights of Scully’s extraordinary life and 67 seasons with the team. It included several clips from Scully’s 2016 retirement ceremony, when he reassured fans that baseball would return in the spring, even if someone else was at the mic.

The emotion of the moment was evident the faces of players and fans, who raised Dodger caps to the rare public figure who was universally adored and respected.

“You and I have been friends for a long time,” Scully said in that authoritative but soothing tone that informed and entertained generations of baseball lovers.

“There will be a new day and a new year. When the upcoming winter gives way to spring — huh-ho — rest assured, it will be time for Dodger baseball.”

I only hope this video did you justice. You will never be forgotten, rip greatest of all time 💙🙏🏾🐐pic.twitter.com/AzFrKYsXOj