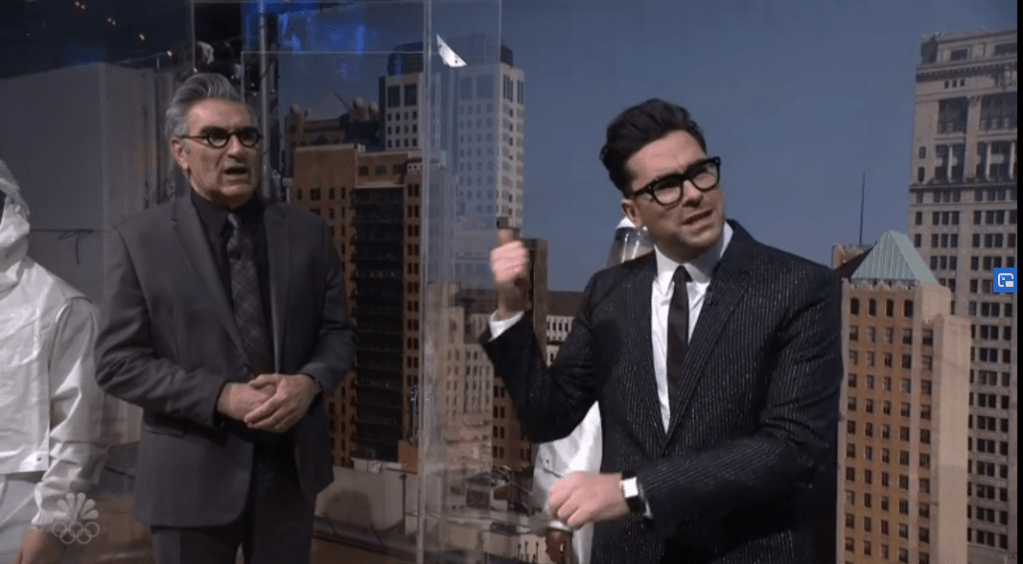 The Emmy-winning star, showrunner and co-creator of “Schitt’s Creek,” Daniel Levy, hosted “Saturday Night Live’s” Feb. 5 episode, and during his monologue he was joined by a very special guest — his father and “Schitt’s Creek” co-creator and star Eugene Levy.

Daniel Levy started the monologue by talking about the good and bad ways in which the six-season Canadian comedy changed his life, including winning those Emmys (that was the good) and having strangers on the street recognize him (also good) but having them yell “Ew” at him when they do (that was the bad). “A line I wrote for the show will now haunt me for the rest of my life,” he said.

The show also brought him to “SNL,” which he said was “all good.” To showcase how, he took the audience on a backstage tour, during which he not only showed off the halls, the NBC page desks and the portraits of former hosts, but also the new COVID-safe protocols.

These included socially distanced audience seating pods — and when he got too close to one, Aidy Bryant as safety officer Doreen shoved a pool noodle in between him and the audience member to show him how far away six feet really was. Bryant-as-Doreen popped up a few more times on his tour, smacking his hands as he tried to point to things because she claimed that was a way of spreading droplets.

He walked through a very cold disinfectant mist; attempted to have a conversation with Kenan Thompson, who was standing at the other end of a hall; walked past musical guest Phoebe Bridgers’ quarantine zone and eventually came upon his father, who was isolated in a glass box, with two staff members in PPE standing on either side of him.

“I flew in to wish you luck tonight, but because I traveled I’m now in this isolation box,” Eugene Levy.

“You flew all the way just to watch the show from a weird box?” Daniel Levy responded.

“I didn’t know about the box at the time, no. I found out when I landed,” he explained.

As Daniel Levy prepared to officially kick off the show, Eugene Levy called out to ask if someone could turn his box so he could see the stage.