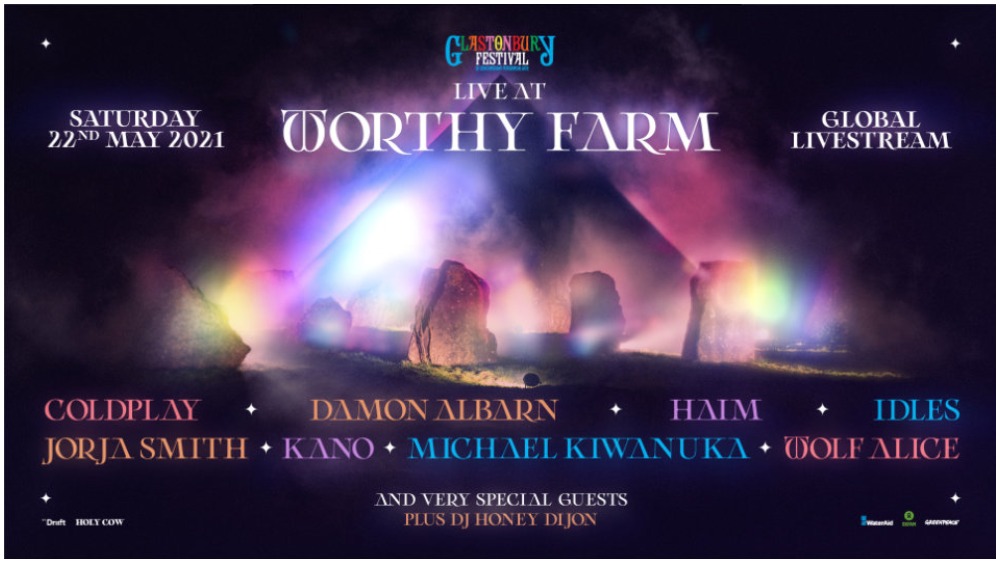 The festival also promises a number of surprise unannounced performances. Shot by Grammy-nominated director Paul Dugdale, the event will be filmed across the festival’s Worthy Farm site at landmarks including the Pyramid Field and the Stone Circle.

The five-hour program will be streamed across four separate timezones with staggered livestreams, including U.K., Europe, Africa and the Middle East, North America East Coast and Central and South America, North America West Coast on May 22, and Australia, New Zealand and Asia on May 23.

The concert will be accessible only to ticket buyers and tickets are on sale now at £20, €23, $27.50 and AUD$35. A limited edition lineup poster for the event is also on sale, with proceeds going to Stagehand, the live-production welfare and benevolent fund, which is helping crew who have fallen through gaps in the U.K. government financial support during the pandemic.

“After two Glastonbury cancellations, it brings us great pleasure to announce our first online livestream, which will present live music performances filmed across Worthy Farm at landmarks including the Pyramid and, for the first time ever, the Stone Circle,” festival organizer Emily Eavis said. “It will feature a rolling cast of artists and performers who have all given us enormous support by agreeing to take part in this event, showing the farm as you have never seen it. There will also be some very special guest appearances and collaborations. We are hoping this will bring a bit of Glastonbury to your homes and that for one night only people all over the world will be able to join us on this journey through the farm together.”

The show will be co-promoted and produced by U.K. livestream business Driift, who have hosted livestreams for artists including Laura Marling, Nick Cave, Biffy Clyro, Niall Horan and Kylie Minogue, and BBC Studios Productions.

Take what’s going on with his now 20-year-old, dub-pop-hop cartoon act, Gorillaz. Before the start of Gorillaz’s arena-sized “The Now Now Tour” — which had its U.S. debut at Philadelphia’s Wells Fargo Center on Thursday (Oct. 11) — Albarn announced everything from a new Gorillaz album for 2019, to a first U.S. Gorillaz Demon Dayz Festival for October 20, in Pico Rivera, CA with Erykah Badu, DRAM and more.

So it came as a jolt to many in Philly, then, when a smiling Albarn informed the audience that “this is the last time you’ll see us for a while.” He’d sounded like he was heading toward a lengthy hiatus in recent interviews, but this pronouncement had a serious ring of near-finality. “We came into being, then disappeared,” he declared. “Nothing is forever, right?”

Albarn then gave a special shout-out to American audiences and the surprisingly young fans of Philadelphia: “The States, you guys, made us into something immeasurable.” With that, Gorillaz launched into the last tune of a 22-song set list, the sandy spaghetti-Western funk of “Plastic Beach.” They waved goodbye, then did a six-song encore that included the rubber-band funk of “Late Zurich”; a tender tribute to the late Buena Vista Social Club vocalist Ibrahim Ferrer with “Latin Simone (¿Qué Pasa Contigo?)”; and a spare, punkish take on “Kids With Guns,” with Albarn leaping off the stage and pushing his face into a crowd of selfie-snapping fans.

Maybe these sorts of mixed messages are all part and parcel of Albarn forever having voiced his lonely space boy musings and anarchistic opinions through a stick-figure, cartoon character named 2-D.

If this was part of the great wind-down of Gorillaz, the Philly show was a glorious, multi-genre mash-up of Albarn obsessions (e.g., Jamaican dub, Minneapolis funk, Ennio Morricone, Cuban son) made spiky and subtle. Few artists could quiet an arena filled with screaming teens hushing so as to hear expressionist piano runs, intricate bass lines or toots of his melodica — all with a team of spirited backing vocalists reminiscent of Luther Vandross and his “Young Americans” crew.

This show was an epiphany, in that Albarn had finally allowed himself to truly sing Gorillaz songs as himself — a distinctly British voice, deadpan at times, yet wrecked, deeply emotive and prayerful — rather than through his cartoon alter-ego. Instead of taking a backseat to the character for this Wells Fargo show, 2-D was just a figure on a screen behind the Gorillaz front man.

Placing less emphasis on the overall graphic image of Gorillaz allowed this vibrant, magnetic ensemble, its guests and Albarn himself to relax, then shine. In the past, the G-team seemed to work too hard to channel their vibes through a cartoon image. Now freed from those confines, the reggae-riffic “Tranz,” with its bass drops and dub effects, and the piano-pounding pop of “Last Living Souls” opened up and blossomed.

With the singer clutching a mic like Hamlet grabbing the skull of poor Yorick, the electro-grunge of “Tomorrow Comes Today” and the Kinks-ish “On Melancholy Hill” came alive with vocal drama, as the six background vocalists soared soulfully between Albarn’s every breath. The German cabaret stripper pole funk of “Every Planet We Reach Is Dead” was a brisk and brittle workout for Albarn as he scoured his lower range before hitting a mawkish falsetto.

A gleeful De La Soul joined Gorillaz for the goof-hop of “Superfast Jellyfish” and the acoustic guitar-driven “Feel Good Inc.” Peven Everett and Bootie Brown made “Strobelite” and “Stylo” into Jam & Lewis-worthy vocal work outs. Despite the guests and the dynamite band, the night was Albarn’s, especially when he took on the quiet of a Latin-laced “Souk Eye,” the dub balladry of “El Mañana” and a flatlined British coo on the Gorillaz hit “Clint Eastwood,” where he sang “I’m useless but not for long/The future is coming on.”

With a show this exquisite, one can only hope there’s still a future with Gorillaz in it.