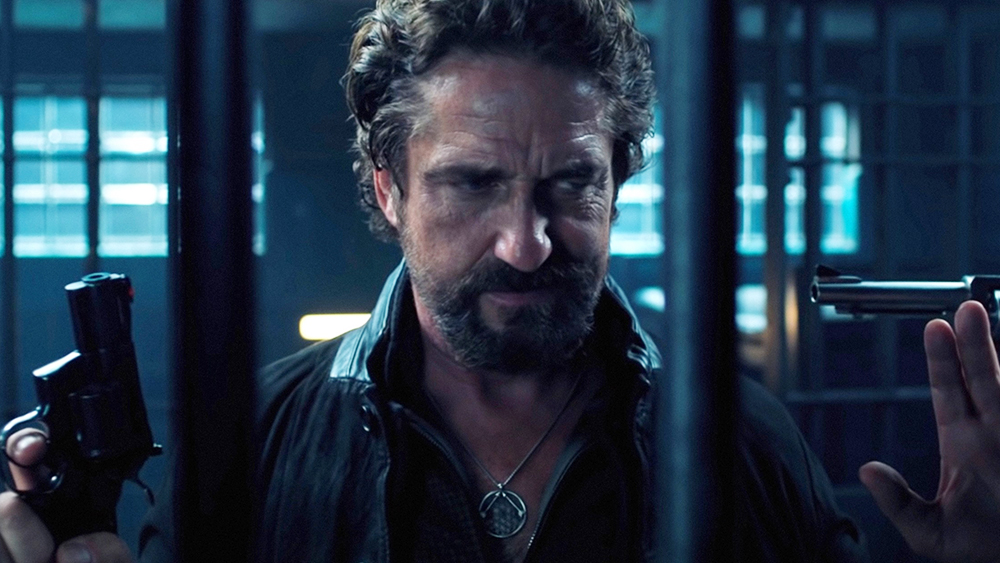 In one of the more effective scenes in “Copshop,” a hitman, played with psychotic geek gusto by Toby Huss (rocking a Ben Davidson mustache), strolls into a desert police station in Nevada carrying a bouquet of birthday balloons. He kills several cops, and he ends up walking down a hall blasting away — with a snub-barreled submachine gun that spits out bullets with raw fire — at a door made of bullet-proof glass. (He figures if he fires enough shots, he can crack it open. And he does.) Behind the door stands Officer Valerie Young (Alexis Louder), flecked with beads of grace-under-pressure sweat as she tries, like someone in a countdown-to-the-apocalypse thriller, to reset the password that will allow her to enter the adjacent room. The director, Joe Carnahan, cuts between the bullets blazing and the password resetting, and the gonzo ballistic relentlessness of it all is…entertaining.

“Copshop,” in its down-and-dirty way, doesn’t always make up its mind about what it wants to be: underworld character study, cat-and-mouse thriller, screw-it-all action fantasy. The film takes its title from the Gun Creek police station, where just about the entire thing takes place. It’s the rare movie police station that looks like a corporate office — two-tiered and cushy, with the cops seated at spacious desks under high concrete ceilings, and some color and design beneath the fluorescent lights. But the heart of the action unfolds in the station jail, where there are two big cells right across from each other.

The two men in those cells — Teddy Murretto (Frank Grillo), a criminal fixer who just struck a deal with the Feds, and Bob Viddick (Gerard Butler), the Mob hitman who has been assigned to kill him — both got themselves locked up on purpose. Facing off, they rag on each other, exchanging occasional acrid bits of philosophy, almost like characters in an old Western. After making her escape, Officer Young joins them, having accidentally shot herself in the abdomen. I like the idea of a prison hang-out movie (“Rio Bravo” is one of my favorite films), but the defining quality here is that the characters honestly hate each other. “Copshop” is a scuzzbag “Rio Bravo” that turns into a hyper-violent video game.

Huss’s jabbering psycho, who also has the worst scene in the movie (his falsetto rendition of “Teddy’s Dead,” sung to the tune of “Freddy’s Dead”), has teamed up with Huber (Ryan O’Nan), a lumbering, bearded dirty cop, and the movie is kind of about these two trying to bust into the jail so that they can kill everyone else. But it’s really about how the other three take their place in the hierarchy of good and evil.

Butler is, of course, playing a hitman with a heart of gold. He establishes that by the icy accuracy with which he sizes up the sleaziness of Grillo’s character, and also by the definitiveness of his physical force. Butler has gone beyond bruiserhood — in “Copshop,” he’s like the human version of a Mack truck. Grillo makes his duplicity double-edged (Teddy will sell you out, but has a way of finding good reasons to do it), and Alexis Louder, who starts out very by-the-book, turns out to be holding her power under wraps. As an actor, she has a concentrated mindfulness and daredevil flair — you could imagine her playing Angela Davis, or maybe Grace Jones.

Carnahan, who did good work earlier this year directing “Boss Level,” has always had a true talent. But as he demonstrated all the way back when he made “Blood, Guts, Bullets and Octane” for about 75 cents, he thrives on a certain level of artful convolution. In “Copshop,” he’s working too hard to create convolution where there is none. What you may enjoy along the way are the little touches: the deranged fillips of Huss’s performance, the way that Carnahan hones in for a small eternity on Louder spinning the chamber of her gun just before she delivers the coup de grâce. “Copshop” is a processed slice of genre meatloaf with the gravy occasionally dribbled in ornate patterns. It’s junky and synthetic, but it fills you up.